Harper and Abbott at APEC : To boldly blow ... 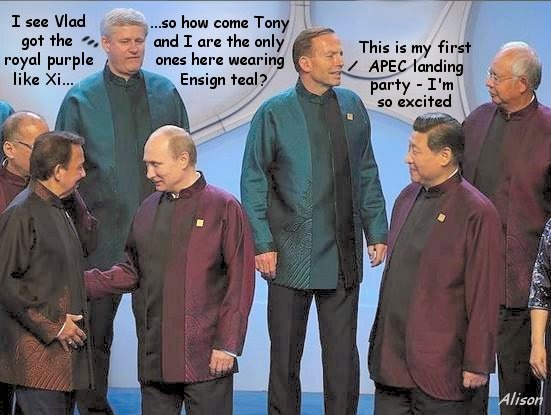 What are these guys? Trekkies?

My suspicion is that they are all Klingons in disguise, Alison.

You are humorous Alison you just made my day starting out with laughter...

They're all so weird.

I think they are of Harper's Borg and have been assimilated, under Harper's collective brain.

I read, Harper has dumped the Ukraine. it is now said, it was a Ukrainian government jet, that shot the passenger plane down. They said it was not a Russian missile. The passenger jet, was riddled with bullet holes.

Harper has been told more than a few times, he is not wanted in this war with ISIS. This time Harper was told, he should have trained the troops, that have their boots on the ground. Has Harper bombed another bulldozer? Seems Harper has hit another target.

It wasn't the Ukrainians: http://rabble.ca/blogs/bloggers/christophermajka/2014/11/mendacious-nonsense-denialism-conspiracy-theory-and-manipula

Is that a real photo?

It's as real as you are.

Anon@6:07 Yes. It's a still from a news vid which does not show some other leaders also wearing teal so it struck me as an Ensign Ricky moment

Look at this folks...

"The fleet is made up of the "Varyag" cruiser, a destroyer named "Marshal Shaposhnikov", a salvage and rescue tug and a replenishment oiler.

How do two yes two ships plus a refueling tanker and a tug boat make a fleet, I suppose then that the skateboarding kids [which I don't mind]in my neighborhood make an army, when they hang together eh?

I hate being that person but it's APEC.
Doesn't change the joke, but FYI.

Harebell, I think the point being made is that Tony has no idea where he is.

Harebell : And I love you for being that person. Thanks so much - fixed it.