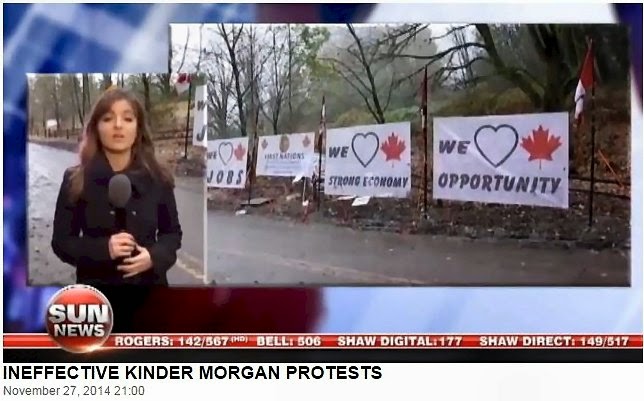 Heh. After slagging off on the protesters on Burnaby Mountain for days for being "professional protesters", SunNews ran this headline banner reading "Ineffective Kinder Morgan Protests" under their friendly coverage of four huge pro-oil signs up on the mountain.

But wait ... haven't we seen those counter-protest signs somewhere before? 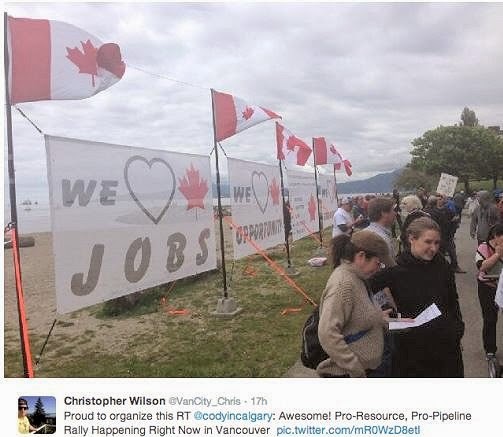 Oh here they are!
Back in May at the "No Enbridge!" protest on Sunset Beach in Vancouver, representing :

Just a couple of guys on a grassroots website with four counter-protest Canada Action banners big enough to block the view of the ocean.... and

The big banner guys above signed up earlier this year at the email-harvesting site, Power of Canada, part of a public relations campaign meant to mobilize the public called the Partnership for Resource Trade. It's hosted by the Canadian Chamber of Commerce.

From the Power of Canada P4RT mission statement (italics -mine) :

"We aim to foster a favourable environment for policy decisions that enable responsible resource development and trade.We will do that by informing, energizing and mobilizing a broad coalition of Canadian thought leaders, stakeholders, small- and medium-sized businesses and informed Canadians in a countrywide fast-to-action, grassroots public education and advocacy campaign."

In May, CCC CEO Perrin Beatty offered a $2000 student scholarship for producing a video on the merits of P4RT and its objectives. Rule # 1 : 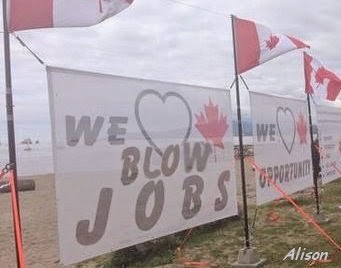 So I guess we can be expecting a lot more
"Canadian thought-leaders" with their
"fast-to-action grassroots" websites and banners in the near future.

Here's one to get them started : We Heart Blow Jobs.

And Sun News of course has an exclusive interview with the sign guy:

I stopped in at SNN last night to see if Ezra would mention his $80k loss in his defamation suit...

He didn't...but his bit about Burnaby Mountain was amusing enough.

My first time visiting Sun TV.
The host talking to the reporter on Burnaby Mountain in your picture up was giving his views on pipeline safety.
He said that if in the future a pipeline were to break, KM would have a plan in place to funnel the spilled oil "into a valley or something".

Holly Stick : I couldn't find it online. A shame about the signs being trashed though.
As you can see in the May twitter pic, pro-oil Canada Action enthusiast Christopher Wilson says of the signage : "Proud to organize this."
In comments under the June pro-pipeline oped in the Vancouver Sun written by Wilson and Wyatt Webster, someone remarks on the suspicious professionalism of the signs and Wilson answers : "$1000 for signs between 6 people".

Anons : It's certainly a whole nuther world over there. I heard that diverting spilled oil into some valley remark too. Good lord.

Some speculation about Northern Gateway pipeline going to Prince Rupert instead of Kitimat:

Is this new to us, no we have seen it before demonstrations were held outside of super markets that sold farmed Atlantic salmon in the fiords of BC.

Gordie boy Campbell or someone in his administration sent BC employees on our pay to protest the protesters, remember that? I do I was living on the island at the time...

I used to travel to Sonora Island from Van Isle and had to go by the fish farms, disgusting they were...

Martha Hall Findlay and the Partnership for Resource Trade bunch have reared their heads again, over divestment: