I thought we'd have a look at a few of the 35 Canadian corps mentioned by the International Consortium of Investigative Journalists in their Luxembourg foreign tax fiddling leaks but first ... 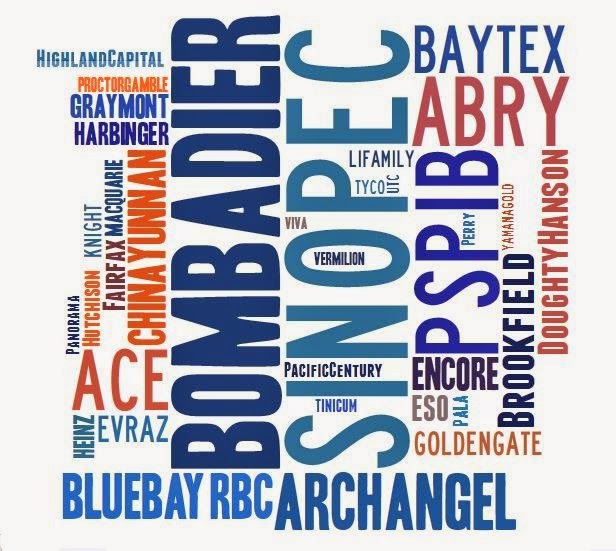 On Monday, Minister of National Revenue Kerry-Lynne Findlay proclaimed in the House:


"One of our government's key areas of concern is the issue of international tax evasion and aggressive tax avoidance."

By Wednesday, courtesy of CBC, NDP Megan Leslie shot back :


"An international investigation has revealed a Canadian crown corporation uses phony Luxembourg shell companies to avoid paying foreign taxes. So how are Canadians supposed to trust the Conservatives to crack down on aggressive tax avoidance when they're busy setting up shell companies of their own?"

Tony Clement, President of the Treasury Board, responded that the Public Sector Pension Investment Board is "at arms length, arms length from the federal government."
And just in case that wasn't clear enough, Joe Oliver leaned into the mike to crossly repeat "arms length". You can watch this above exchange in Montreal Simon's excellent account.

ShamWow Tony is trying to be at arms length from his own job here.
From the Public Sector Pension Investment Board website :

The board seem like a highly qualified and capable bunch, all appointed since 2006 for four year terms and variously coming from backgrounds in banking, insurance, and Vampire Squid Canada.
It must get tricky though - one of them is on the board of Husky Energy Inc., a company 70% owned by Li Ka-shing and one of the companies profiled in the ICIJ leak.

Here's a three minute primer on how these Luxembourg tax loopholes work :

OK, on to a few of the Canadian companies mentioned in the ICIJ leaks, as written up by PricewaterhoseCoopers.

"In view of facilitating the cash redeployment out of Hamilton Standard Canada Inc., UTC envisages the use of a Luxembourg-based finance company.

Subsequently, Hamilton will transfer funds to Arlington in exchange for issuance of Mandatory Redeemable Preference Shares ("MRPS"). Arlington would then finance in its turn various subsidiaries of the group, as necessary.

Such entities will therefore be considered as Luxembourg tax residents.


"TIPTOP Energy Limited, a Hong Kong company, is a fully-owned subsidiary of SIPC.

In case it is necessary, for dividends and net wealth tax, the double tax treaty concluded between Luxembourg and Canada also applies, should TIPTOP Luxembourg Sari hold at least a participation of 10% in the capital of Bidco since the beginning of its fiscal year (particularly, there is no requirement for a minimum taxation)."

UK's Doughty Hanson set up a Luxembourg shell, Luxco, loaned itself $3M and bought preferred shares in a Canadian solar inverter tech company.
Only interesting because one of DH's former principals, who focused on Benelux markets, made the jump from DH last December to do private equity in the Toronto office of our other pension board, the Canada Pension Plan Investment Board.

Li Family Trusts   Mr Li Ka-Shing, who owns a good deal of Vancouver, loaned its Husky Energy shares to a Luxembourg shell through two of its Barbados companies. The shell was entitled to all Husky dividends for the period of the loan : "The securities lending agreement for [the shell] will be neutral both from an accounting and tax perspective."

Meanwhile it was almost exactly one year ago that 270 unionized welders and pipefitters contracted to the Husky tarsands project were laid off and replaced by cheaper temporary foreign workers.

These are the corporate legal loopholes and tax avoidance schemes feeding the 1% and fueling growing wealth disparity and austerity bullshit - and there's no evidence any of it is illegal!
CNN Money :

"Luxembourg is like a corporate version of extraordinary rendition, a place where companies can do their dirty work that would not be permitted at home," said Crawford Spence, professor of accounting at Warwick Business School.

The Tax Free Tour is an excellent doc on this.  To see what holding corps to account for their foreign tax fiddling actually looks like, skip to the 33:33 minute mark.


"Drafted for the company by consultants Ernst & Young, the proposal involved a complicated restructuring that would send $500 million from Bombardier's U.S. unit to a Luxembourg subsidiary in exchange for mandatory redeemable preferred shares, which are treated as debt.All payments made by the Luxembourg-based company are treated as interest payments and thus deductible and subject to low tax rates in the grand duchy.Bombardier can then repatriate the money to Canada in the form of dividends, which are not taxable under a tax deal between Canada and Luxembourg.

Bombardier has been the recipient of millions of dollars in federal and provincial subsidies to boost the aerospace industry."

Should we expect any different from a cabal that views taxation, at least as it pertains to the wealthy and the corporate sector, to be the great evil

.. it would be interesting and useful ..
to see some sort of hierarchy flow chart ..

One that portrays how the dreams needs and wishes
of Canadians & electorate enacted by public servants
ie Judiciary, Parliament, Harper, his MP's, Senate, spy agencies & other 'arms length' agencies like National Energy Board, Mounties, CSIS etc

How Harper, Ray Novak, The Conservative Party, PMO, The Harper Government, Jenni Byrne, China, CSIS, Senate, Mounties dispense & enact their own dreams needs wishes as well as those of Energy Partners or other foreign interests that I don't recall as being on the ballot in the last elections.. ... ...

Trying to pretend rancid 'pulled pork'
is strong responsible government
is the trademark of Harper, Clement, Baird et al
with the submissive support of about 5000
seriously disturbed Quislings..

OK .. maybe its closer to 10,000 or so..
but that's still an Evangelical Minority ..
The Harper Faithful or Fateful ..
" the duplicity.. the complete subservience
to one man's narcisstic dogma.. is astounding

Will some veer from the path ?
Or every single one
take a spectacular leaping plunge .. ? .. !

Never mind that you earned your income DESPITE government. Never mind that YOU bore the risks, YOU saved the investment capital and YOU produce actual goods...be a good little tax cow and stand up on your hind legs cheering for government...

Cocoabean should I just lay down and die?

An indictment of the one man party the so-self-named Harper government, who can question this wisdom? Eh? Oh I got it a die in the wool con or a Canadian 1%er now watch pete and steve go to federal court, stay tuned...

Once again, the MSM is MIA on this story. One brief mention 3 days ago and that's it. Shameful.

hello,
English is not my native language so I have some problems to understand this section completely:
„... is "at arm's length, arm's length from the federal government."
And just in case that did not clear enough, Joe Oliver Leaned into the mike to crossly repeat "arms length".
What is here the special meaning of "arms length"?
regards

English is a tricky language unless you learn about nuances.

Arms length as Oliver used means that the federal government claims it played no role in what happened/occurred...

Those of us who are not blind to facts and not believe the governments fiction are however not fooled.

Hope this helps and I know English can be the most confusing language in the world.

Hi Wonni.
Arm's length = an agreement made by two parties freely and independently of each other. Beziehung auf Distanz. à bout de bras.

The Canadian President of the Treasury Board was claiming his Government is completely separate from the Public Sector Pension Investment Board and had nothing to do with their decisions, when in fact he appointed them.

Or in the case of Tony clement, it's about how far up Harper's ass his arm is.

Alison. You need a keyword cloud.

Sorry, Mogs, cross-posted with you.

We were both trying to help and I believe the cross posting was in order to make the question answered better...

I took no offense but was impressed how the two answers made it very clear for someone who is confused at our Canadian English language...

@ mogs moglio
Hello, Thanks for your reply.
I just have another small understanding question: In the post „tax avoidance“ was mentioned. I have never heard of tax avoidance before. How can someone avoid taxes?
Regards

@ Alison
Hello, Thanks for your reply. Now I understand the meaning of "arms length" in this context. Thank you.
So that’s why they said "arm's length" repeatedly. Because they knew it was not actually true that the "government is completely call separate from the Public Sector Pension Investment Board". So they have secretly influence on government decisions?
Regards

Wonni : re tax avoidance for corps. Click the last link in the main post "The Tax Free Tour" and choose subtitles in the language of your choice.

Hi Alison,
Thank you, for your response. Now I understand that whole story better. You are really helpful and you answer all my questions. Such a willingness to help is very rare.
I have another question for you. Would you be so kind and click on the next link? It appears a survey, which I have created. I perform it for my bachelor thesis. It's about blogs on the internet. The survey is short and completely anonymous. Would you do me that favor?
Link: https://docs.google.com/forms/d/1sdMatVGQ369v3WP7SgiMvIrMCfbqzUxTo0lq2kvXL_4/viewform?usp=send_form
Regards
Wonni