DILBIT : The smartest guys in the room 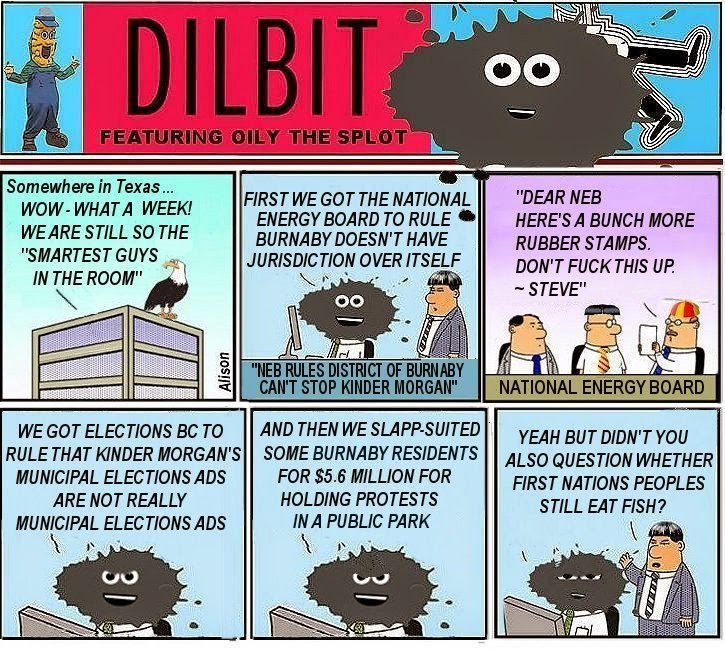 Ok, I don't think we can pin that last one on the smartest guys in the room, but meantime ...


Former BC Hydro CEO Marc Eliesen referred to the NEB as "industry-captured" and their Trans Mountain hearings as "a fraudulent process" and "a public farce" in his letter of resignation from the hearings.

After the cross-examination phase of the review was inexplicably shelved, intervenors were instead invited to submit their questions in writing. Trans Mountain refused to answer them "or referred back to the inadequate information in the original application that gave rise to the question in the first place."

"Out of the approximately 2000 questions not answered by Trans Mountain that Intervenors called on the [National Energy] Board to compel answers, only 5 per cent were allowed by the Board and 95 per cent were rejected."

"The Board has sided with Trans Mountain dismissing the Province of BC’s need for answers in pursuit of its duty to British Columbians. The Province should cancel the Equivalency Agreement with the NEB on this project and undertake its own environmental assessment as the only meaningful way in which it will be able to effectively obtain the answers it seeks."

BC, you will recall, gave up its right to do its own environmental assessments so as not to unnecessarily duplicate the work of the National Energy Board; in 2010 BC signed an Equivalency Agreement promising to accept the NEB's decisions.   Ha.


"In a precedent setting NEB decision in 2011, the Board granted Kinder Morgan the right to pre-fund future expansion applications from five firm shipping customer contracts to its Westridge terminal. Two of the five companies funding Kinder Morgan’s pre-development costs are Chinese National Oil Companies PetroChina and Nexen, while the remaining three are US Oil, Astra and Cenovus. These companies pay an average premium of $1.45 per barrel to guaranteed $28.6 million per year is allocated to the special account.

Kinder Morgan has confirmed that $136.3 million of its special fund has been allocated to finance the current NEB public review process."

Donate towards the legal costs to challenge Kinder Morgan in the courts.

Boris in comments : "Meanwhile, the price of oil and therefore the lucrativity of pipelines keeps falling as US production ramps up due to fracking and renewables reach cost parity with fossil fuels. The pipeline mayn't even be built but we'll be left with a fracked process to be abused for the next big thing."

So THAT"S what caused "drf" and I to be gay! The 'ole magic potion gay serum trick!

Meanwhile, the price of oil and therefore the lucrativity of pipelines keeps falling as US production ramps up due to fracking and renewables reach cost parity with fossil fuels. The pipeline mayn't even be built but we'll be left with a fracked process to be abused for the next big thing.

Worth a re reading
http://www.huffingtonpost.ca/ben-west/enron-kinder-morgan_b_3908063.html

Boris : Right on! Bumped your comment into main body of post.
According to NEB spokesey quoted in
Vancouver Observer, no cross-examination by intervenors is not new.
Eliesen says it is.
"For them to suggest they've done this in the past is totally misleading and erroneous," he said. "We've never had in the history of the NEB a public hearing process in which there was no oral cross examination...You have a situation here where all intervenors have done due diligence and have put in a heck of a lot of work and time and cost...and you submit all these questions. And you have proponents refusing to answer questions, who appeal to the NEB. That's what makes this whole thing a farce."

The Tyee and CBC now have articles up on Eliesen's resignation letter also.

Thanks, Ron.
Ben West : Kinder Morgan: Another Enron-Style House of Cards in Waiting

RossK at Gazetteer has been on Kinder Morgan going all the way back to no public hearings on the sale of BC Terasen Gas to two ex-Enron guys.

Awesome cartoon! Just wanted to mention that it's 5.6 million dollars in that lawsuit. Not 56.

Thanks, AJ - fixed it. Kept meaning to change "Burnaby Mtn." to "public park" because wtf? so did that too.


Boris : Also could mean Energy East a bust because it was for overseas export anyway, so those let-them-freeze-in-the-dark eastern provinces would be getting all their oil from the states instead of just some of it ... fulfilling Steve's dream of making North America a secure one-perimeter petro state.