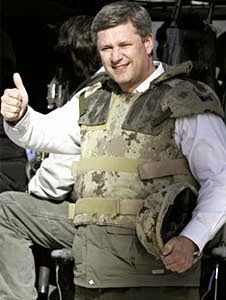 
"Next year's payouts could be even larger, since the government is tying those to the savings managers can find in their departments. An estimated 800 jobs will be lost at Veterans Affairs over the next three years."

"Veterans Affairs Canada managers made hundreds of thousands of dollars in bonuses for cutting costs as the department shed hundreds of jobs.


"According to departmental performance reports filed with the Treasury Board, Veterans Affairs had the equivalent of 4,039 full-time employees in 2008-09. That number fell to 3,050 by 2013-14.

More than half of those cuts came from a program called Health Care and Re-Establishment Benefits and Services.

The program is in charge of helping with the physical, mental and social well-being of veterans and to “provide access to employment support, health benefits, home care and long-term care.”

"Veterans Affairs is spending an additional $4 million on advertising this year — including television spots throughout the NHL playoffs ... The TV ads emphasize efforts to move soldiers smoothly from military to civilian life...."

The form, given to military personnel who are transferred to the Joint Personnel Support Unit, was sent to the Citizen by military members upset with what they see as a threat to their right to speak out about the failure of the Department of National Defence and Canadian Forces to take care of the wounded." 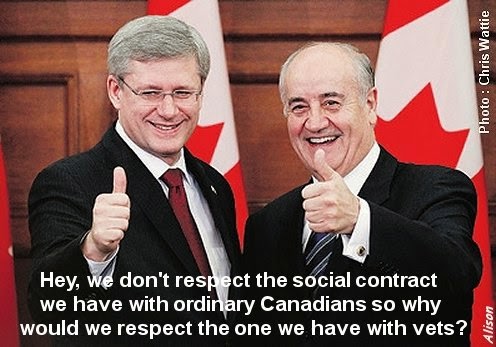 This month - December - the government is again attempting to have the vets' case in the British Columbia Court Of Appeal dismissed on the grounds that they have no particular social contract or covenant with returning troops because the promise made by Tory PM Robert Borden in 1917 was just "political speech":

"The defendant pleads that the statements made by Sir Robert Borden and the coalition government in 1917 were political speeches that reflected the policy positions of the government at the time and were never imended to create a contract or covenant."

Veterans Affairs Minister Julian Fantino's office released a statement Wednesday saying the government doesn't comment on issues that are before the court.
.
Posted by Alison at 3:03 am
Email ThisBlogThis!Share to TwitterShare to FacebookShare to Pinterest
Labels: Fantino, Stephen Harper, Support the troops, veterans, Veterans Affairs

.. so has The Harper Government hired social media spies to monitor wounded and retired military Vets, their Facebook accounts, email etc. What of those Vets who declined to sign the required form?

.. and a question .. Who dreamed up such a draconian policy and form? Is it possible to put a name and face to that churl? And to anyone in the chain, political or military who helped drive or approve such nonsense and suppression?

"These recent transgressions are in addition to the $5 Million Veterans Affairs is using to promote the laughable concept of how well Canada treats its veterans." Brent Rathgeber

Remember him? The only one brave enough to stand up and walk away from the Harper machine...

I hope people in the military or recently retired read this or are aware of this and REFUSE to vote for anything resembling a HarperCONservative in the next election.

salamander, it is the same w/ Crown corps, like all workers comp.

Salamander : ".. so has The Harper Government hired social media spies to monitor wounded and retired military Vets, their Facebook accounts, email etc. What of those Vets who declined to sign the required form?"

Vets who declined to sign had a note put on their file that they had had the policy explained to them.

I don't know if we know about gov specifically hiring social media spies to monitor vets.
However this bit from the form :
"military personnel in JPSU will be held responsible for not only the content they post on social media outlets but also the content of their friends which they have “tagged” on various sites"
certainly suggests someone is keeping track.

In May Tony Clement went on Canadaland to respond to Jesse Brown's questions about the gov "creeping us on facebook". Clement said they outsource social media tracking to companies like Radian6 where the info is aggregated and rendered anonymous.

"Until it happened to me I thought domestic government surveillance could only be carried out with a warrant. In my case there was no warrant and yet in 2011, I received hundreds of pages of government documents revealing that 189 federal government officials from the departments of Justice and Aboriginal Affairs were routinely spying on my personal Facebook page, collecting information about my family, friends and me, and distributing it to other government officials.
They even collected Facebook addresses of other users and circulated postings made by children, without the consent of their parents. My domestic and international movements were monitored and my personal and private government records were accessed. Government email correspondence suggested the surveillance was undertaken to try to prove I had “other motives” for filing a historic human rights case in 2007 alleging the federal government’s provision of First Nations child welfare was discriminatory."

The Conservative Party or their security detail also track individuals on Facebook. Remember when a first time voter in the 2011 election was visiting all the campaign rallies to figure out who to vote for? She posted a pic on facebook of herself with Iggy at a rally the previous week. After 30 minutes inside a Con rally attended by Harper she was evicted by security personnel who tore up her admission ticket and told her: "We know you guys have ties to the Liberal party through Facebook. You are no longer welcome here."

Anon@8:09 : working on something re workers comp

Tempest in a teapot.

Other retired government employees can only dream of the perks they still enjoy!

You know your blog has arrived when trolls like cocoabean arrive to deposit turds in the thread.

Targeting vets---more accurately, injured veterans of Afghanistan, and, more precisely, those with PTSD, sounds like it should be more inspired by prejudice against a bona fide injury that used to be lumped in with "mental illness"---in the whispered sense, how they used to do it---than anything else. It's as if application for benefits for PTSD is supposed to be branded suspicious, the calculation of a crazy person that cannot, on some twisted principle, ever be legitimized by recognition---kinda like "we never negotiate ransom demands"---especially of soldiers, for fear of brining the Forces into disrepute defined by some other twisted principle.

When Harper defended Fantino the other day, it looked like something more than a move-along-nothing-to-see-here routine. The gag agreement veteran disability applicants must sign to qualify gives something away at least: soldiers who talk out of school will be punished. But talk about what? Everybody already knows about the Conservative parsimony on the disability file.

It still doesn't seem worth the trouble to Harper, military people once having counted as Conservative supporters, and the Conservatives now positioned so they can't take support for granted: the next contest will be tough and if it isn't close, it won't be a Harper government.

Cons are certainly very vulnerable on their previously boasted military and coastal security procurement contracts: done a horrible job on arctic icebreakers, but the fighter jet procurement has been absolutely bizarre---and expensive! Is there possibly something here worth risking the good will of military people over? Is the treatment
of todays vets like a shot across somebody's bow?

Is the treatment
of todays vets like a shot across somebody's bow?

Or just the behavior of someone who knows he can get away with it, who knows something we don't know yet.