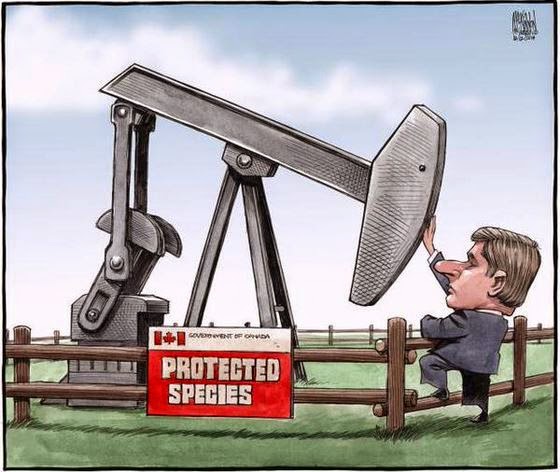 Brilliant cartoon from Bruce MacKinnon illustrating Canada's unprecedented decision to opt out of 76 of 77 resolutions not to trade in endangered or protected species like manatees, turtles, and swallowtail butterflies at last year's Convention on International Trade in Endangered Species [CITES]

Environment Canada has not explained why they won't support the bans but it's possibly related to pique at the proposed ban on commercial trade in polar bear parts put forward at CITES by the US and backed by Russia, which banned polar bear hunting in 1956. The other polar bear regions - Alaska, Greenland, and Norway - have all banned it aside from the traditional practice by indigenous peoples.

According to the United States Geological Survey in 2007, the decline in sea ice is expected to lead to the extirpation of approximately two-thirds of the world's polar bear populations within the next 50 years.
Environment Canada reported 75% of Canada's commercially traded polar bear skins or bodies were exported to China in 2011.

Insert mental pic of polar bear balancing on tiny ice floe floating out to sea here.
As MacKinnon so aptly illustrates, the only species Steve has shown any real interest in protecting so far is the tar sands ... 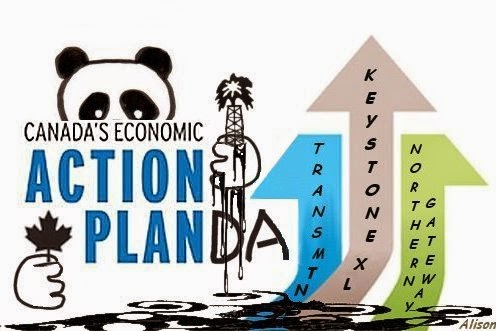 "The federal government failed to spend a total of $321-million Parliament approved for “environmentally responsible” programs last year—nearly one-third of the money that was available for that purpose—while spending more than the $438-million that had been set aside to fund programs that primarily supported the oil and gas sector through scientific research, market development and government advertising."


“We’re not nearly dead last in climate change progress for nothing, we worked at it, and we worked at it by emphasizing the oil sands in preference to everything else. So when we have this impending oil deflation, the price of oil deflation, all of our eggs are in that basket and because all of our eggs are in that one basket, we’re just watching that basket sail down the river, and there is no plan B."

Canada is backwards and upside down under the Harper dictatorship. He swoons over the NWT and yet Russia banned polar bear hunting in 1956. He loves the Red Chinese paying in excess of $10,000.00 for a Canadian polar bear pelt. The man is definitively sick. Remember the polar bear license plates? A true symbol of the north...

I am despising Harper more each and every day. Why are these beautiful giants of the north not protected as they are in Russia Norway and Alaska? Our Harper government is a fascist dictatorship that is why. Harper killed his own cat and wanted his chef to bury it in the back yard of 24 Sussex we know he is ugly and evil beyond reproach. He conveniently hides behind religion and the Jewish English appointed state in Palestine...


OTTAWA -- Stephen Harper is being sued by his former chef, who also claims the prime minister never paid him for babysitting duties, washing the family car and burying one of Mr. Harper's pet cats."

.. well, we all know who makes the real decisions..
I often play out the scenarios in my head.. and their not hard to imagine fairly accurately.

At some point, a brief clipped to a document makes it to Jenni Byrne and/or Ray Novak.. Most of these never get to Harper. Why bother? Ray Novak can fill Steve in during private time and knows perfectly well why Steve and he are A-OK keeping polar bear body parts available for trade internationally.

And so it goes on down the line of complicits..
There are literally hundreds of key issues that Canadians don't 'stand for' but Stephen Harper & Ray Novak .. and one assumes Laureen Harper are just fine with.

Gee Laureen.. you bring 'stand by your man' to glorious staggering new heights. Do you like dining with the Arthur Porters, Tom Flanagans, Peter Kents Paul Calandras etc? No wonder you always seem to be in pain in the photo ops with your creepy husband.

At least ask your husband what he has against swallowtail butterflies.. and let the rest of us Canadians know if you get an answer ..

Harper has a list of degenerates as long as his arm, to do his dirty work for him. Some are already in prison, others are on their way. Some Harper sent to the UK. Ex BC Liberal Premier Gordon Campbell and Nigel Wright is also over there.

Harper at his most dispicible, sold Canada to Communist China with his FIPPA deal, for a minimum of 31 years.

China has Elephants slaughtered, for useless Ivory trinkets. They cut the fins off Sharks for soup and throw the sharks back into the sea to die. China will slaughter Canada's wildlife, we fight so hard to protect.

China has polluted much of their farmland and 40% of their water. Dead pigs come floating down China's rivers. Thousands of fish die in those rivers, because of ammonia. China's rivers stink so bad, they make people gag.

Then the Orca Whale that died with her unborn calf. She had starved to death.

Mogs, no one has accused Harper of killing the family cat, for god's sake.

CBC : "[The chef] alleges he took on other duties for which he was not paid, including babysitting the couple's two children, washing the family car and burying one of Harper's pet cats after it died."

Yes Alison I am a cat lover I have a Tuxedo cat named Roo because she bounces on her hind legs when very happy with front paws in the air. She is clever very clever. When I inherited her she came from a litter and was already one year old that was five years ago. All her brothers and sisters are dead now due to improper or malnutrition. Cats as big as lions to as small as house cats are carnivores and only were for millions of years eating fresh raw meat. So if you are feeding your cat kibbles yes you are destroying it slowly that to me is inhumane. The kibble stuff has corn wheat oats and very little animal protein that they require the most.

Her coat is shiny everyone that drops by makes the same comment "Wow what a beautiful cat" no kidding. I did my homework and found a place in Cranbrook BC called Top Hand and Pets go Raw the owners whom I've met swear that their pets got allot healthier when they switched them to raw meat. That is why they started the business. Cats eat the whole thing they catch bones innards and all. Pets Go Raw mix all that stuff in grind it and freeze it and my cat proves them right. Now Harper is feeding his cat kibble so he is in fact killing it softly...

As every uninformed human is doing to their so-called 'pets'?

That's all. I love animals period I was raised on a family farm and used lay on my sister's horse's back in the summer in the shade of the barn. It was fun I was eleven and her tail would keep the fly's off me! Loved every minute of it I would ride her down to the river on hot summer day in crystal clear water where I could see the trout and we would both plunge in. Ahh those were the days. I did see neighbors mistreat their animals though. We were raised to respect them unlike Harper who uses cats for political purposes and if he loved kitty so much why did the lazy fat slob not bury kitty kitty himself? Guilt and laziness I presume.

Canada's economic action plan is as phoney as... Well you decide:

Who are these people?

They wanted bankers to control Canadian currency stead of the bank of Canada they wanted NAFTA they wanted WTO they wanted FIPA they wanted CETA they got them all and they want temporary foreign workers that is in fact a permanent foreign worker program. They have no use for Canadians because the 150 of them control $4.5 trillion and 60% of our trade.

$4,500,000,000,000.00 They own the Harper cons that is why we are having devastating legislation coming out of Oilwa that favor them but kicks us Canadians in the ass.

Allison, just shut down comments altogether for a while - we'll wait.