Michael Sona, fall guy robocall perp sentenced to nine months in jail for his role in the 2011 election robocall scandal, has served 12 days of that sentence and would like to go home now while he waits for the appeal of both his conviction and sentence.
OK, said Judge Harry Laforme today, releasing Sona til May 29, 2015.

As Sona's trial progressed from his being an unlikely criminal mastermind whose friend and fellow Guelph campaign co-worker received immunity to give evidence against him that turned out to be so self-serving that even the prosecution said it should "be approached with caution", to the testimony of the Hill staffers delivered to Elections Canada's investigation by the Con Party lawyer who sat in on and coached their initial EC interviews even as EC lacked the power to compel any witnesses themselves, and on to his lawyer's decision not to put Sona on the stand because he thought they'd won their case, Michael Sona mostly serves now as the symbolic closed door to any further investigation or interest by Elections Canada into the 1,394 legitimate complaints about misleading phone calls across 234 ridings in the 2011 election. 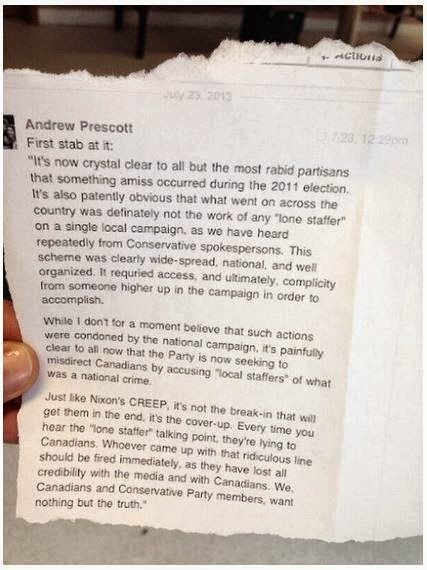 Ironically, perhaps the most damning account of this farce to date comes from the guy who rolled over on Sona - the same guy who testified he logged out of his own RackNine account on election day only to log back in again a few minutes later onto the Pierre Jones/Poutine account on the instructions of Guelph election campaign chair Ken Morgan who decamped to Kuwait after refusing to be interviewed by Elections Canada.

Sona still insists he is innocent of the charges brought against him and doesn't know who the real perp(s) were in Guelph.


Elizabeth May has again called for a public inquiry.

Peter Smoczynski is still making his election fraud documentary, with renewed fundraisers coming in the spring.

Perps with Perks Boxed Set!
Order yours in time for Xmas today!

Dec 15 Update : The Crown served notice today it wants to lock up Sona for an even longer sentence than the nine months he is already appealing.

What a sick, sad farce Elections Canada is.
Who knew our democracy was so contemptibly fragile?

"decision not to put Sona on the stand because he thought they'd won their case" Source?

"After watching the Crown call a dozen witnesses and rest its case without providing any physical evidence linking Sona to the cellphone, computers, or RackNine ... Bozall huddled with his client.
"We had a witness list of our own," Michael Sona told me. "But Norm took me into a backroom at the courthouse and told me they hadn't proven their case. That's when he decided not to call our witnesses or put me on the stand."

What about the robo-calls, that came out of the US? There was Front Porch Strategies. Two Americans Wenzel and Parker, directly participated in Conservative campaigns in Ontario.

Cote said, he had no jurisdiction to chase down robo-calls, that came out of the US.

Sona certainly played a part in this election fraud. However, he had a lot of help with this election scam. Sona has chosen to keep that a secret.

Harper won last time by default because the Liberal vote collapsed, but he would have won without all those dirty tricks; It showed his insecurity: afflicted by minorities, he got way behind schedule--plus his righteous backbenchers were getting restive having to keep their yappers zipped for that second one. Having already been convicted of the "In & Out" campaign finance scam, pulling off those sleazy Robocalls was quite risky. Sure enough, some of those dirty tricks were exposed, and some of the perps caught, but otherwise he got his majority, only cost him a couple flunkies. The fact that a lot of people believe he probably did something shady and got away with it makes him look formidable in a sense. But I don't believe any of these underhanded tactics necessarily emboldened Harper to affect more of the same by way of the perversely named "Fair Elections Act"---there will be too many eyes peeled for any trace of voter-suppression to dare repeat it; however, the Act takes another diabolical approach by actually inviting post-election litigation by disqualified citizens on a number of grounds, none of which implicates Conservatives directly--except maybe figuratively as the authors of the legislation.

Many will be turned away under the Act's new registration rules: some first-time voters (who might become last time voters as a result) but more importantly, some veteran voters who'll be disenfranchised for the first time in their lives. Each one will be a potential litigant seeking his or her right to vote. Never mind recounts, these unConstitutionally disenfranchised voters could stir up a real judicial shit-storm if they have enough of the magic ingredient. The perversity is these potential crusaders for democracy can be turned to tactical advantage by Conservative incumbents.

Remember the Opitz case and the contested Etobicoke election result: an automatic recount turned into a judicial recount, then turned into an extraordinary precedent. If I remember rightly, because the issue of proper voter registration and/or eligibility was deemed too complex, and the cost of rerunning the whole election too high, the judge settled the matter BY SAMPLING A SMALL PERCENTAGE OF POLL-RETURNS INSTEAD OF RE- COUNTING THE VOTES (!), declared something like a statistical tie and awarded the seat to Opitz, the Conservative incumbent. Since there'll be no dearth of registration and eligibility conflict in the upcoming election because of the new Act, one has to wonder: how many close contests will be awarded to the incumbent using the Etobicoke precedent?

The aforementioned "magical ingredient?" It's the stuff the losing Liberal contender in Etobicoke pulled out of his pockets, one after another until he'd exhaustively bankrolled his legal challenge---it was, I think, somewhere north of three-hundred thousand dollars of his own money. Tough loss but a good measure of how proper he considered the judge's decision, and how honourable his cause was, even in defeat.

One good thing might come of the Fair Elections Act, assuming new masses of voters are unConstitutionally disenfranchised by it: class action. Maybe that'll be where some magic ingredient can be found.

Meanwhile, it's a worse thing for people to not vote just because we don't have proportional representation. Close Conservative wins only happen when their super-reliable minorities are electorally magnified by a majority that doesn't show up.

I thought it was illegal for any foreign entity to participate in any way in our elections.

But with the illegal so-called "Harper Government" anything goes.

By the way Alison I want to be the first to order thirty million boxed sets of "perps with perks" so Santa can give one to every Canadian including Mr. and Ms. Harper and their son Ben...

Anon@4:33 : In an early interview with McMaher, Sona didn't deny ever having done *anything* - he denied having done what he was charged with. If true, he might not have any real knowledge of actual perps here.

Pretty sure on March 10, 2012 I was the first person to post pix and tweets of FPS CEO Matt Parker campaigning in Fantino's campaign office and their additional campaigning for Rick Dykstra.
Dave at the Galloping Beaver then brought up the legality of foreign interference in Canadian elections.
A month later on April 9 Vancouver Observer picked the story up and in addition contacted FPS Canadian liaison and former Dykstra campaign manager Jim Ross who told them FPS was only there drumming up business.
Cote cited this disclaimer from Ross at Vancouver Observer as part of his reason not to pursue further investigation into the matter.

Here is Cote's ruling and letter of response.
Here's Kady's summation of events

Scotty : So many good points you raise here . Etobicoke Opitz SAMPLING ruling an abomination - had not considered it might set a precedent for future close results. What a mess.

Perps with Perks page Missing CON MP Peter "Drunken Buffoon" Goldring. Drives his Truck when he's Hammered and Gets away with it! ! Two years ago he reeked of vodka at a Rememberance Day Ceremony while laying a wreath at the Beverly Cenotaph. Asshole!