Emma the Embryo vs Andrew Coyne 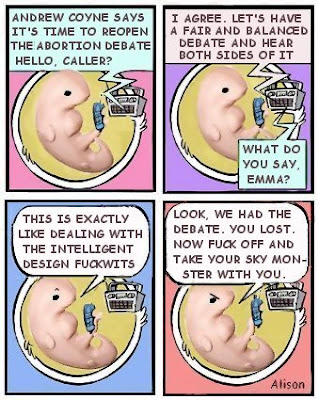 Yo, Andrew. It's not necessary, and certainly not advisable, to give every agitated minority a shot at rolling civilization back a couple of generations by giving them airtime, and by extension legitimacy, in the guise of being reasonable and fair-minded.
Anyone whose invisible sky monster has told them not to have an abortion is perfectly within their rights not to have one.
h/t Dr. Dawg for the link to Coyne.
Edward Greenspan : "I don't know if I have ever witnessed a more absurd protest than the current nonsense regarding the awarding of the Order of Canada to Dr. Henry Morgentaler.
Elizabeth Bagshaw was one of the early female doctors in Canada. She was the head of Canada's first and illegal birth control clinic. She received the Order of Canada in 1972. Isn't it amazing that Doherty, Finn, Gocki and others could share their Order with Bagshaw all these years?"
h/t Fern at Bread 'n Roses
Posted by Alison at 8:33 pm
Email ThisBlogThis!Share to TwitterShare to FacebookShare to Pinterest
Labels: abortion, Emma the Embryo, Feminism