Almost Anybody But Conservative 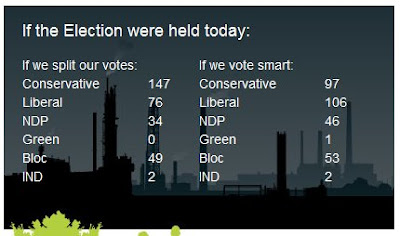 Vote For Environment is an online campaign to prevent the centre to centre-left vote-splitting that resulted in a Con victory last time round in our crappy first-past-the-post voting system.


The site looks at 63 key ridings in which a united vote to defeat the Cons would have been successful in 2006 if at least one-third of those parties' supporters had voted for the leading opposition party in their riding instead of voting their individual conscience.
Entering your postal code takes you to a map of your riding and a dropdown box of the most recent election predictions from VFE, Ekos, Nanos, and Decima, updated daily.

Of the 63 ridings, the Vote For Environment strategy would see 44 seats go to the Liberals, 11 to New Democrats, seven to Bloc candidates and one to Elizabeth May of the Green party.


Co-creators Kevin Grandia of the excellent De Smog Blog and Alice Klein of NOW mag are indeed both Libs and while they strive mightily to be party-neutral in their endorsements, dippers will certainly be disputing some of their calls, if not the entire notion of strategic voting.
It's early days yet.

YMMV.
Posted by Alison at 12:47 am
Email ThisBlogThis!Share to TwitterShare to FacebookShare to Pinterest
Labels: Election 2008, first-past-the post, strategic voting

Yeah, I'm afraid I do have to dispute some of the calls - particularly the ridings where they're recommending a Liberal vote in a riding won by Conservatives in the last election - but the second place challenger was NDP.

And I would love the Greens to have a seat too, but the combined Lib/Green vote in that riding doesn't come anywhere near the second place NDP standings from last election. May should be running in one of the disputed Vancouver ridings, where the Greens are actually a challenger, not a riding where neither the Libs nor the Greens ever had a chance.

But nobody listens to me, so there you go. (If I ruled the world.../snark)

Deanna - where exactly are they recommending a Liberal where an NDP is running ahead of them? Honest question - I didn't spot any ridings like that.

As for the rest, I dunno. The information is out there, and if you don't agree with their conclusions you can arrive at your own. They even say so on the website.

I have to say though, while I have always been against strategic voting on principle - and REALLY against specific parties or candidates endorsing it - I am seriously warming to the specific riding-by-riding approach that 'Vote for Environment' and others are taking. And frankly, there are so many of these sites cropping up now from all sorts of places that I really don't think you can just write it off to "Don't Waste Your Vote - Vote Liberal" shenanigans.

I'm lucky in that my preferred candidate in my riding is also the one with the best shot at beating the Conservative. But if I lived somewhere with a strong second place NDP or even Bloc candidate... sorry, Garth. SOL.

In fact, if I was voting purely by party platforms I agreed with, I'd probably vote NDP. But I like and respect Garth Turner despite his obvious ex-PC shortcomings, I don't think the NDP has enough experience federally not to make a hash of it, and if I had Lisa Raitt as my MP I think I'd have to move.

Is that wrong? Are these impure thoughts to have? Or are these exactly the kinds of calculations that everyone makes when they place their vote?

Vote informed on all the variables - that's all I can say.

Madawaska--Restigouche for one, Peterborough for another. There are others.

We'll see how they look after the site is updated after the debates.