Off to the polls 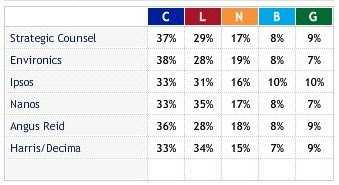 Most recent polls above from yesterday's Globe & Mail.
Take a good hard look.
The Cons currently hold 127 of the 308 seats in Parliament, the Libs have 95, Bloc Quebecois - 48, the New Democrats 30 and the Greens have one. Three seats are held by independents, and four are vacant. Harper needs 28 more seats to get his majority.
Coverage from away :
Xinhua from China : Why Canadian prime minister calls early election
"Dragged by a slowdown in the U.S. economy and the high energy cost, Canada's economy has been sluggish this year and may plunge into a recession in 2009. An election campaign next year would be a nightmare for Harper because crabby voters tend to blame the sitting government for the bad economy and punish it by their ballots.
Harper chose to launch the election campaign on Sept. 7 also because he wanted to avoid three by-elections scheduled on Sept. 8. The Conservatives are very likely to lose in all three of them, further reducing their lead in parliament over the Liberals."
CNN : Canadian PM employs loophole in potential power grab
"Robert Bothwell, director of the international relations program at the University of Toronto argued the move was political.
"Harper is going for a majority government. That's really the only issue," he said.
Observers also say Harper wanted a ballot ahead of the U.S. election. Bothwell said if Democrat Barack Obama surges in the next month in the United States, it will help Canada's opposition Liberal party."
Back here in Canada Bloc Québécois Leader Gilles Duceppe doesn't sugarcoat it much :
"The Conservative Party stands for big oil, guns and a right-wing American-style ideology that threatens women's right to abortion. Like George W. Bush, Stephen Harper has done everything in his power to sabotage the Kyoto Accord [to reduce greenhouse gas emissions],” Mr. Duceppe said."
So we're getting our 5th general election in 11 years and the 3rd in just over 4 years.
Aren't you glad we still have our antiquated undemocratic first-past-the-post system and not one of those notoriously unstable types like STV or MMP which result in frequent elections?
Posted by Alison at 4:07 pm
Email ThisBlogThis!Share to TwitterShare to FacebookShare to Pinterest
Labels: election, FPtP, MMP, polls, Stephen Harper

I believe these elections will be very thrilling. Conservatives seem to have good prospects, however, last months have been too wild and many voters are forming their opinions about this topics right now. Gas prices, real estate slowdown, inflation, poor GDP growth, health care...
Jay