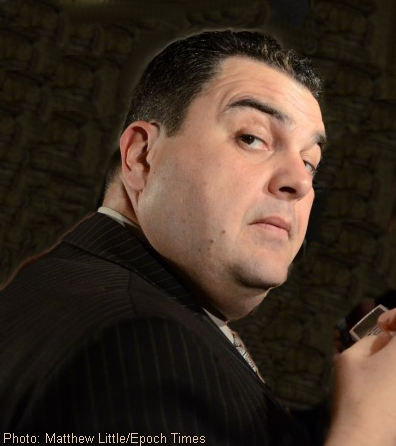 "The effect of the Prime Minister, the Finance Minister and the Governor of the Bank of Canada coming out and attacking the Canadian dollar was to reduce its value by about 5 per cent over the last two weeks,” Del Mastro told the radio station in an interview.

“That means the price of goods everyone has to buy … these things will, over time, go up in price."

Del Mastro resigned as Harper's parliamentary secretary and election fraud pointman in the H0C after Elections Canada began investigating him for campaign overspending and an alleged ham-fisted cover-up. EC is also investigating Dean's cousin David for allegedly paying his employees $1050 apiece to contribute $1000 of it back to Dean's campaign.

Dean's seat in the House of Commons was banished as far away from Steve's as possible and I guess he's figured out it isn't going to float back in time for the next election .

So I guess that story on the weekend about a ghost ship full of cannibal rats cut loose by Canada was kind of an allegory, huh?
.
Posted by Alison at 4:38 am
Email ThisBlogThis!Share to TwitterShare to FacebookShare to Pinterest
Labels: Del Mastro, election fraud, Stephen Harper

Allegory. I had that a once-lovely ship full of rats also fits with Canada's place in the world these days.

Great photo choice, Alison. He looks like a supporting cast member of "The Sopranos". He better tread carefully or else he'll end up in a watery grave like Big Pussy Bonpensiero.

Harper's list of degenerates, is as long as his arm. Some of which, are on their way to prison.

Del Mastro should have known better than that? Harper cuts everyone else's throats, to save his own miserable hide.

Calandra reminds me of Harper's Goebbels, with his ranting and raving.

Harper is the only Canadian PM ever, to be held in contempt of Parliament.

How that monster is permitted to keep running this country, boggles me.

It may well be that Del Mastro has decided his best before date has now expired for the federal Conservatives. No one is going to protect him, after all he has done for the party.

Whoever says, hell hath no fury like a woman scorned, never met a politician scorned. They can do oh so much more damage. Del Mastro has nothing to loose and everything to gain. if there is enough "shit hitting the fan" some of those who want to head the party may infact start their campaigns. Now Del Mastro may well think he is finished in politics, but an appointment to some board or such would be a nice reward for spilling the beans and./or attacking Harper.

Of course after having watched the Veterans on the late news last evening, some one ought to talk to a couple of them to get their permission to run their comments as election ads. Loved the one which told them to go to Hell and another one which told people not to vote for Harper.

Seeing the end of Harper will be wonderful!