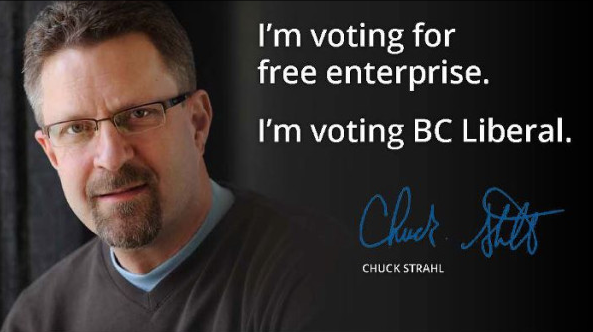 The Vancouver Observer is reporting that last month former Reform/Alliance/Con MP Chuck Strahl added Enbridge "Northern Gateway Pipeline lobbyist" to the list of other part-time jobs he has accrued since leaving Harper's cabinet two years ago:
It's a good article and I'm not going to rehash it here so go read.

In October 2011, the Vancouver Sun reported that Strahl had already bagged Enbridge as a client at his new private consultancy and quoted him as a self-described pipeline supporter.


"The National Energy Board worked with the RCMP and Canadian Security Intelligence Service to monitor the risk posed by environmental groups and First Nations in advance of public hearings into Enbridge Inc.’s Northern Gateway project."

So. Enbridge lobbyist and SIRC Chair Chuck Strahl monitors CSIS which in turn monitors the Canadians who don't want the Enbridge pipeline he is lobbying for.

Tim Groves at the Dominion, Oct 2012, before he moved to The Guardian :


"The Canadian government has been orchestrating briefings that provide energy companies with classified intelligence from the Canadian Security Intelligence Service, the RCMP and other agencies, raising concerns that federal officials are spying on environmentalists and First Nations in order to provide information to the businesses they criticize.

The secret-level briefings have taken place twice a year since 2005."

In Nov 2010, the RCMP and CSIS assisted the department of Natural Resources in organizing a daylong event at CSIS headquarters in Ottawa. From a director of energy infrastructure security at Natural Resources :


"These forums provide excellent opportunities for energy sector stakeholders to develop ongoing trusting relations which facilitate the exchange of pertinent information 'off the record'."

Which hat would Strahl be wearing when he comes to review joint CSIS/energy sector stakeholder events like that? His Christy Enbridge lobbyist hat or his SIRC spy watchdog hat?

And what is SIRC's stance on closer ties being fostered between private sector tarsands giants like Enbridge and the spying agency it oversees?


"Today the Service [CSIS] is also reaching out to non-traditional partners, such as the private sector."

"In SIRC’s opinion, an effective strategy would involve identifying those sectors with the greatest potential to be of investigative value to the Service ... the Service strives to engage and support the private sector’s security needs in other ways. Efforts are also underway to increase the number of security clearances for individuals in the private sector."

Clearly, Porter saw the advantage in mining the private sector for intel in exchange for assurances regarding their security, as did former CSIS chief Jim Judd, head of the agency Porter was supposed to be monitoring, as quoted in the Review of CSIS's Private Sector Relationships (SIRC Study 2010-2012)


The ridiculous thing about Strahl registering as an Enbridge lobbyist with the BC gov in order to "arrange a meeting between Minister Rich Coleman and representatives from Northern Gateway Pipelines" is - does anyone really think Coleman and Enbridge need help finding each other?
.
h/t : Strahl's 2012 by-election campaign ad at top via Jennifer Woodroff.
.
Posted by Alison at 5:22 am
Email ThisBlogThis!Share to TwitterShare to FacebookShare to Pinterest
Labels: Christy Clark, Chuck Strahl, CSIS, Enbridge, Manning Centre for Building Democracy, Northern Gateway Project, SIRC, tarsands-to-tankers pipeline

Good job on this one, Alison - Thanx!

The incestuous webs this crowd weaves is disgusting. But then again, they're disgusting so it makes perfect sense . . . .

I don't know what to say. Just another day in the cesspool that is Reform party Harperland.

Great point Alison!
If anyone is in each other's pockets it is Coleman and Enbridge - why would they need a lobbyist other than to get Stahl officially registered so he can be one of the insiders.
The entire oil/BC libs/Cdn cons web is a stinking, rotting mess.

"" does anyone really think Coleman and Enbridge need help finding each other?

Finding Coleman is easy, just stand on Mount Robson and look for the largest object between you and the Pacific Ocean.

Does this mean Strahl is a convicted felon, or fugitive? I assume that is a requirement for the position since Porter the fraudster went on the lam.

This is really incredible, even Con buttlickers who think Harper's shit don't stink are critical of this and usually they can rationalize ANYTHING!!!!!!!