Toss another book on the fire 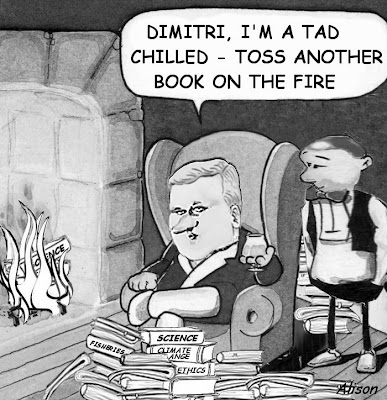 Yeah, it's an old toon recycled for Steve's Libricide :

I see Steve has also recycled Dimitri Soudas back into play.

I like how Dimitri's new rug really ties the room together.
Posted by Alison at 3:27 pm
Email ThisBlogThis!Share to TwitterShare to FacebookShare to Pinterest
Labels: book burning, cartoon, ConToons, Fahrenheit 451

CBC's Fifth Estate broadcast Friday evening was one of my more depressing TeeVee experiences. Not because of the production, it was the content of stevie's relentless assault on all things intelligence-based.

May The Universe have mercy on Canada under his rule . . . .

Actually, Alison, I think he just grew into the old one.

Oh dear, trying to remember my Dutch history class where piles of books were burning. Lemme see...YES, just across the border in the land of .... where the perps cannot be named for fear of the invocation of the Godwin Law.

.. basic review of the Library and Archives Act is very revealing. Any government (science) library that closed.. must follow strict records disposition protocols, by law. Obviously, the protocols were violated. At this point we 'assume' either DFO or PMO directives directed the closures and violations of records disposition. 'Records' are maps, texts, books, charts, images etc, by the way.

Will mainstream media or opposition in Parliament confront the government regarding the violations, request identification of the responsible 'agency' and demand resignations and repatriation of all surviving records?

Of interest.. the Librarian and Archivist position is being advertised currently. its filled temporarily by a staff member, an economist by training, appointed by James Moore, as was Caron, who resigned.. underfire for failures to digitize records, among other issues.

This is one of the most important stories we're likely to see in a while. It deserves much ore serious investigation by the MSM. Just fyi, the most recent Cross Country Checkup program was all about....the weather.