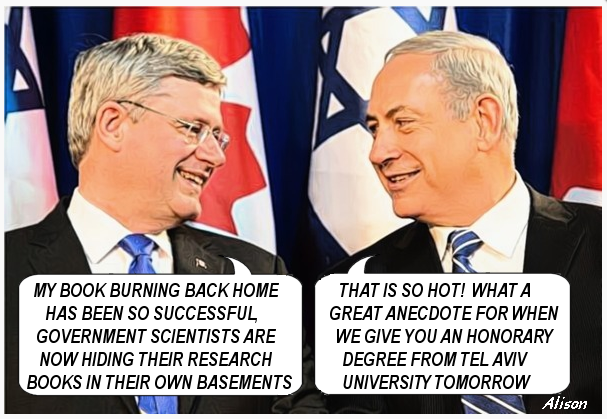 You didn't really think he was going to stop at muzzling scientists and librarians and historians, eliminating their jobs, burning books, and closing down Fisheries research libraries, did you?

Health Canada scientists are so concerned about losing access to their research library that they're finding workarounds, with one squirrelling away journals and books in his basement for colleagues to consult.

"One group moved its 250 feet of published materials to an employee's basement. When you need a book, you email 'Fred,' and 'Fred' brings the book in with him the next day."

James Turk, executive director of the Canadian Association of University Teachers : "Scientifically, we are going to be a third-rate country."


"Mr. Stephen Harper will receive the honorary degree of Doctor of Philosophy for his exemplary conduct as a prominent world leader who promotes freedom, human rights and the rule of law; for his efforts to advance higher education; for his open and fundamental support of the State of Israel both as a private individual and as Prime Minister of Canada, and for his active and brave participation in the struggle against anti-Semitism and other forms of extremism.

“Mr. Harper has served as Prime Minister of Canada since 2006. Since Mr. Harper entered office, his government has promoted strict laws relating to public accountability; reduced personal and company taxation to the lowest level for forty years; introduced reforms in the criminal justice system; and strengthened Canada’s international reputation as a reliable ally in the defense of freedom, democracy and human rights."


"I am extremely flattered by the degree and the reasons for which it was awarded. Let me just say this - that I want to accept it not just on behalf of Laureen and myself but the entire Jewish Canadian community who have in our country - and really for both of our countries - merited this award a million times over."

There was another dictator of whom, destroyed books as well. All dictators are paranoid control freaks.

Harper is no different. He was Policy Chief for his, Northern Foundation of 1989. Canadian Neo-Nazis even donated to Harper's Alliance in 2002.

All dictators lie, deceive, thieve, are corrupt, use dirty tactics and cheat to win. Sound familiar? It should.

Gloria Hinotes : If you're going to quote Murray Dobbin and Trevor Harrison, at least do it accurately. Here is the most recent version of the events you refer to from Dobbin.

Boris : Nah, sounds too elitist.
Jason Kenney isn't using his, which he got from the University of Haifa just over a year ago when Ezra Levant and Frank Dimant were on the Haifa U. tribute committee.