A small deployment of 100 "special ops" at first to be sure, but still a significant addition to the ongoing campaign to fund and arm the Mujihadeen, al Qaeda, Al Nusra, ISIS/ISIL/Islamic State, and whoever comes after them next. Blowback. It's a never-ending job.

Here John bomb-bomb-bomb-Iran McCain poses with Free Syrian Army rebels in 2013, in photos purportedly released by ISIS . McCain disputes claims these men are IS-related. McCain press secretary : "If the individual photographed with Senator McCain is in fact Mohamed Nour, that is regrettable."

"I believe there are ways to get weapons to the opposition without direct United States involvement,” McCain said in 2012 during his Mideast tour with Lindsay Graham. "The bloodshed must be stopped, and we should rule out no option that could help to save lives. We must consider, among other actions, providing opposition groups inside Syria, both political and military, with better means to ... to fight back against Assad’s forces."

In Syria, you see, IS are the good guys fighting against Basher Assad, while across the border in Iraq, they are the bad guys.


Here they are rolling across the Iraq border in their column of 43 shiny yellow Toyota Hiluxes, allegedly a gift to 'moderates' from the US, in another photo of disputed origins. 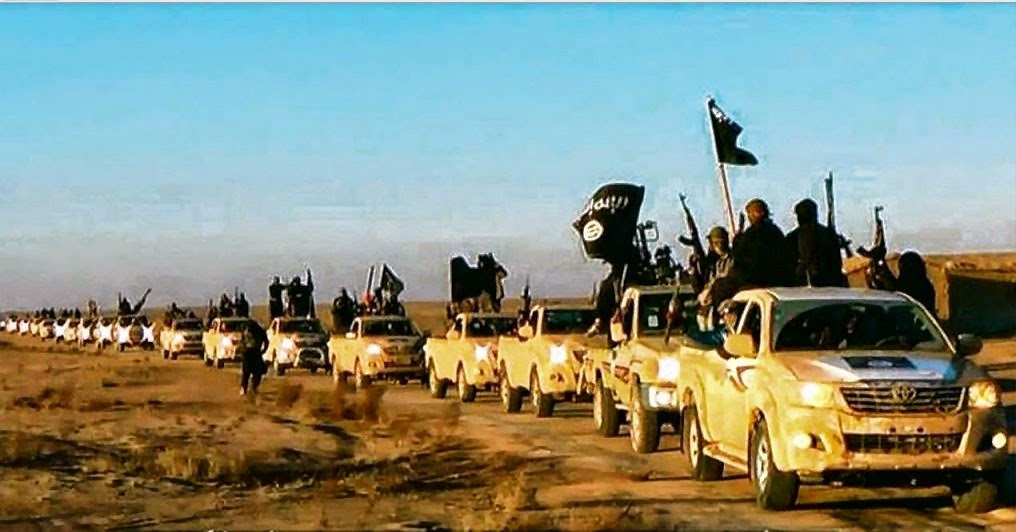 
"The seeds of 9/11s are being planted all over Iraq and Syria".

Yup. Although technically you're still working off having invaded Iraq after the last one.


"Speaking to reporters at the NATO summit on Friday, Harper condemned the "barbaric acts" of ISIS, the jihadist group behind recent beheadings of American journalists."

Harper offered no comment on the 19 beheadings committed by our ally Saudi Arabia last month - some of them for "sorcery and witchcraft" - presumably because Canada has "two contracts totalling $14.8-billion awarded to General Dynamics Land Systems Canada of London, Ontario for the 2013-14 fiscal year to supply Saudi Arabia with military armoured vehicles."

"The Canadian government hopes that over time, ISIS could be pushed back into Syria"

where they will be our friends again.


Islamic State fighters appear to be using captured US military issue arms and weapons supplied to moderate rebels in Syria by Saudi Arabia.

... “significant quantities” of US-made small arms including M16 assault rifles and included photos showing the markings “Property of US Govt”.

It also found that anti-tank rockets used by IS in Syria were “identical to M79 rockets transferred by Saudi Arabia to forces operating under the Free Syrian Army umbrella in 2013″.

Some of this goes to Kurdish middlemen up towards Turkey, some goes for domestic IS consumption and some goes to the Assad regime, which in turn sells weapons back to the group.

Indeed, the dodgy dealings and strange alliances are beginning to look very similar to events that occurred during the Lebanese civil war, when feuding war lords would similarly fight and do business with each other.

Islamic State is essentially self-financing; it cannot be isolated and cut off from the world because it is intimately tied into regional stability in a way that benefits not only itself, but also the people it fights."

geezer mccain in a "regrettable" pic and his boyfriend llllleeeeennnnnzzzzzzyyy graham babbling 'bout farming in the Middle East.

Once again the 'Murican political establishment's actions are impressive, eh ? ? ? ?


How is an F16 pilot who launches a hellfire missile into a family compound or a wedding or funeral party, killing dozens, not a terrorist? Is that anonymous pilot not worse than an ISIS killer?

If Harper is outraged at the murder of journalists, perhaps he could spare a moment for the 17 journalists killed in Israel's most recent incursion into Gaza. Four media outlets were also shelled, wounding 15 other media workers.