Khorasan Group : First there was Mothra ...

Both Syria and Iraq have requested the US not to bomb the shit out of them over ISIS, a group posing no imminent threat to the US, so pretty much the only way Nobel Peace Prize President BamBam could justify doing so would be on the grounds of US self-defence and 3...2...1... voilà ... 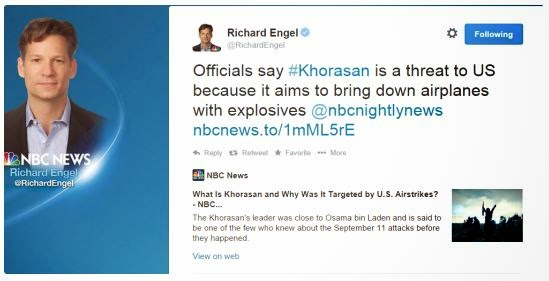 BamBam : “Once again, it must be clear to anyone who would plot against America and try to do Americans harm that we will not tolerate safe havens for terrorists who threaten our people.”

And just like that ISIS is sidelined by the newest biggest worstest previously unknown group in the history of the world EVAH - Khorasanus Rex!

However, the following day, after the story had worked its magical justification for bombing Syria ...

Democracy Now interview with Murtaza Hussain : How the U.S. Concocted a Terror Threat to Justify Syria Strikes, and the Corporate Media Went Along


"In endless war it does not matter whom we fight. Endless war is not about winning battles or promoting a cause. It is an end in itself. In George Orwell’s novel “Nineteen Eighty-Four” Oceania is at war with Eurasia and allied with Eastasia. The alliance then suddenly is reversed. Eurasia becomes an ally of Oceania and Eastasia is the enemy. The point is not who is being fought. The point is maintaining a state of fear and the mass mobilization of the public. War and national security are used to justify the surrender of citizenship, the crushing of dissent and expanding the powers of the state. The point is war itself. And if the American state, once a sworn enemy of Hezbollah, gives air cover to Hezbollah fighters in Syria, the goals of endless war remain gloriously untouched."

One of the funniest comments I read about this latest and greatest threat to the US asked if this was the same gang as the reality show, "Keeping up with the K...". Yeah, I've heard of them and don't like them either :-)

It was only a matter of time before astroturf terrorist groups would appear.

The Kordassians, a reptilian humanoid species from the Alpha Quadrant, continually shed and regrow new scales.
And new names and groups also presumably.

Anon, it's got a very Archer meets Doctor Who meets Orwell meets Tom Clancy quality to it.

Boris : Doesn't it just? The daily beheadings this year for among other crimes, sorcery, on the part of our oil ally Saudi Arabia just got nothin' compared to ISIS showing up on the doorstep of ExxonMobil and Chevron in northern Iraq.

BY and Anon : Whenever I see *news* in a sidebar of one of the K's falling off their shoes again, I automatically envision it taking place on the bridge of the Enterprise.

Yes, we just don't hear enough about the beheadings in Saudi Arabia, 59 so far this year. Now when are we going to bomb Saudi Arabia for beheadings? Oh, not happening. They have nice head gear and decent table manners. O.K.

None of these groups are of much danger to North America. They are in trucks. There's an ocean between us. Ebola got here first. I'd pay more attention to that. Oh, and if the Dallas hospital is any e.g. of how the U.S.A. responds to a real threat to public safety, they are so fucked. Of course the guy most likely didn't have medical insurance.

All this terror talk is just ridiculous. the real terror in the world is people dying of illnesses and people being shot by cops in the U.S.A. I'm sure the average African-American male has more to worry about from American cops than from ISIS.