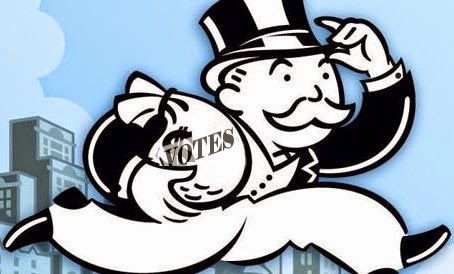 Across Canada, Trust Funds & Savings accounts at 240 branches of THE BANK are robbed on the same day via electronic theft using directories, passwords & access codes shared within Head Office of THE BANK in Ottawa as well as the branches. Thousands and thousands lose all their savings and Trust Funds
THE BANK spokespersons & lawyers immediately bluster that the robberies did not happen - 'Baseless Smears' says one, over and over and over again. Then they grudgingly describe the alleged event as isolated to just one branch... and that all the other banks often allege they have been robbed... and that people who lose all their money often exaggerate.
Banking agencies and the 'Authorities' slowly show some interest. After a year, THE BANK reluctantly states it may allegedly involve more than one branch in Guelph Ontario but if it even happened, it must have been the action of a lone perpetrator - perhaps the bank volunteer who's name they have already leaked to newspapers and TV media. Most all the bank staff from that branch have left the country or soon arrange 'immunity'
The funds are NEVER RECOVERED.. and there is ZERO REFUND for THE BANK's thousands and thousands of clients. After several years of investigation the closure rate is left at 1 out of the 240 criminal fraud cases. The remaining 239 'cold cases' are declared unsolvable by The Banking Authorities & THE BANK cites the conviction of a single person as a great victory for Crime & Punishment & THE BANK. New banking secrecy laws are passed to make this so.
Now my question for erudite and non partisan pollsters is ..
After all this, do you know anyone 'Crazy' enough to keep their money in a branch of THE BANK ?


.
Posted by Alison at 1:56 am
Email ThisBlogThis!Share to TwitterShare to FacebookShare to Pinterest
Labels: election fraud, Michael Harris, RoboCon

Eruditely speaking Salamander I get your analogy but right now it is closer to the mark than you may know. I am reading a fascinating book called "The End of Money" by James Rickards who was a financial adviser to three US presidents. The book is sub-titled "The Coming Collapse of The International Monetary System". It will create chaos and bedlam. If you have paper goods like stocks bonds gold or silver certificates or money in a savings account James advice is get out now while banks are still liquid. Warren Buffet recently pulled all his "paper" out of wall street and the stock market and bought tangible goods like railway tracks and rolling stock that would be trains.

I am hoping Rickards is wrong but he is hard to ignore. He predicted the 1998 downturn in the US economy he also predicted "something" bad was about happen in 2001 [911]. He is not a fortune teller so he did not know what but by analysis of financial trending he knew something was amiss.

He saw these put options sky rocket on American Airlines and United Airlines days before 911 so someone had "inside information" that after the passenger jet liners ran into the twin towers on 911 their stock would make a steep drop. It is estimated that somewhere between $2 and $4 million in profits were made due to that catastrophe. But it wasn't just the airlines:

Surges in purchases of put options on stocks of financial services companies hurt by the attack -- Merrill Lynch & Co., and Morgan Stanley and Bank of America

Huge surges in purchases of 5-Year US Treasury Notes

Rickards also foresaw the 2008 economic meltdown that Harper still denies happened at all. Joe Stieglitz who is a real economist thinks Harper is a buffoon and not an economist. Its a heads up situation and message "Get Prepared" for you and your loved ones.

The only real reason to adopt online voting---fraught with veracity and fraud problems--- to replace our current human-registered, hand-marked, hand-counted and re-countable, scrutinized paper-ballots ---the cadillac of voting systems---is to cheat. The leaders of various Canadian governments have ruminated about adopting just such a corruptible system, ostensibly to encourage youth to vote; leaving the question why addressing low voter turnout among youth should warrant putting the integrity of our most secure voting system, we recall the report commissioned of BC's Chief Electoral Officer by Premier Christy Clark found no place in the world where online voting's been adopted that has experienced an increase in the youth vote. Ms Clark had mistakenly suggested online voting would do just that. The federal government has also made similarly incorrect prognostications; if the Conservatives have read Chief Archer's report to the BC Premier, they haven't acknowledged it. Still, we have to be concerned that adoption of a system so easily rigged is entertained by the authors of the "Fair Elections Act", seen by many as a cloaking device for election cheating: implicated in numerous electoral fraud allegations resulting in a number of convictions, the Conservatives' record and reputation for unethical electoral behaviour should be alarming. It only figures that they'd be down with online voting too.

The consistency of BC Liberal PABsters and federal ReformaConbots looks shillingly coordinated in tactics, and repetitiously low-info long-game in strategy with regard online voting. The most common pro-online argument (perhaps excepting the economic argument that it'd save money, a case designed for the completely misinformed) addresses the obvious security question by comparing it with personal electronic banking; the false premise is the presumed security of electronic banking transactions. As Alison points out, banking transactions are not secure, a fact that bankers are painfully aware of and, naturally, reticent to discuss openly; and, as Chief Archer clearly explained in his report, there are fundamental differences between the two online applications that, in this case, completely refute the notion that online voting can be made more secure (as it would have to be) than online banking. In short, Chief Archer notes that banks quietly lose billions annually to electronic fraud, spend untold millions staying one step ahead of the hackers, and naturally do their utmost to keep their methods secret--- which therefore offends one of the several criteria for a fair vote: that of openness. I don't really need to know how banks keep my banking secure, just so long's they do; however, I do need to know how votes are counted to be convinced of an election's fairness---Elections Canada simply cannot say it's a secret. The cheaters' argument that the two are equatable does nevertheless work as an low-info factoid, where it floats like a shadowy urban myth and/or childhood-planted prejudice.

Thank you, Alison, for keeping us alert to banking's nudge-nudge, wink-wink "security". So long's we don't have online voting I know we'll do better than that at the ballot box. And be totally open about it.

Scotty : You're most welcome but the post was entirely written by commenter Salamander and left under my previous post on the general dodginess of the Environics/IoG/AmericasBarometer survey. Notable however, now that you mention online voting, that that 2014 survey purports to find a 71% approval of online voting across left, middle, and right leaning Canadian respondents :
Left - 74%; Middle - 71%; Right - 71%.
Seems pretty unlikely in light of 2011 election fraud that the left's response was to endorse online voting by a 3 to 1 margin.

Mogs : Interesting interview with Rickards on Death of Money

"However, the U.S. has abused that privilege. We’re printing trillions of dollars,..." that is the heart of the problem. I bought the book by James Rickards entitled "The Death of Money" and sub-titled "The Coming Collapse of The International Monetary System" he has credentials I believe him.I got out of paper and into tangibles. Fingers crossed knock on wood ya my head he-he. I hope the global financial meltdown part III does not happen. But hey I was a scout and the motto was "be prepared".

This post isn't about money at all, but about electoral fraud. Unfortunately, all too few Canadians understand the analogy, which is a very good one at describing the situation and the seriousness. The number of Canadians who actually care enough about election fraud long enough to stop it, can probably be easily all put into jail before enough of a fuss is re-raised.

@saskboy I understand the analogy and know quite well what the post was about. I was merely laying a critical parallel that financially we are about to go over the cliff.

When we have voter fraud in Canada of all countries we have already have gone over the cliff of reality. We used to referee foreign elections to insure no voter fraud was happening now look at us? Shit how did the Harper-cons manage to pull this off?

I don't think so he was merely the fall guy or Harper's throw under the bus guy.

Michael Harris makes it clear that Mr. Sona had no idea that he was was about to get run over by the Steve Harper government.