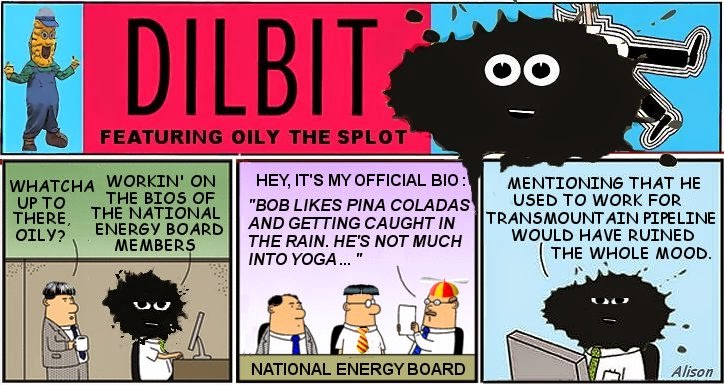 The National Energy Board has sided with Kinder Morgan in refusing the Province of BC's request for more details on how KM would handle an oil spill from KM's proposed $5.4-billion Edmonton-to-Burnaby Trans Mountain pipeline expansion.
None of our business apparently. Kinder Morgan cited "commercial, security, and privacy reasons" for their redactions.

The NEB is also rather coy when it comes to identifying the former energy industry links among the members that make up their own ranks.  NEB bios are full of expressions like "contributed to the creation and development of major energy projects" without getting into exactly which projects and companies they represent. So to augment that lack of info - here's the Nebbies...

Not to pick on "Bob" in the toon specifically here but rather than the NEB stating that Mr. Bob Vergette was once "Vice President, Operations with a major North American liquids pipeline company", it would seem rather more to the point given NEB's current Trans Mountain review to include the info that company he was VP of was Trans Mountain Pipelines - even if it was a decade ago.

NEB Chair and CEO Peter Watson - formerly Deputy Minister of the Alberta Executive Council til last June - is at least straight up about NEB priorities. Last November he explained that "the board's main job is to ensure proper construction of the pipeline" while he saw environmental concerns as more "the job of the provinces and pipeline company".

Roland George : according to NEB "worked primarily in the private energy sector for over three decades", is also a Gaz Metro alumni, and held senior positions with the Canadian Energy Research Institute, or CERI, a not-for-profit tarsands booster.

Ron Wallace : From NEB : "At AGRA, he was involved in major oil and gas operations throughout the former Soviet Union and Russia where he managed major project assignments in conjunction with the World Bank."
Also "senior management positions with Petro-Canada and CanStar Oil Sands Ltd."

Mike Richmond : energy lawyer and Co-Chair of the Energy and Power Group at McMillan LLP; and on the board of the Ontario Energy Association.

Jacques Gauthier : one time personal envoy to Harper in 2010 for the Vancouver Olympics, served on the Prime Minister's Advisory Committee on the Public Service, and was "senior VP and CEO of Kruger Energy Inc., where he headed up a new division dedicated to the development of renewable energy" .
NEB bio : "Mr. Gauthier has contributed to the creation and development of major energy projects in Canada, the United States and Europe."

The only NEB member who doesn't seem to fit comfortably into the oil and gas sector insider mold is David Hamilton - Chief Electoral Officer and Deputy Minister and Clerk of the Legislative Assembly of the Northwest Territories.

Could be it's possible to be just a bit too much inside :
NEB : Onshore Pipeline Regulation Incidents 2000 to 2012 : 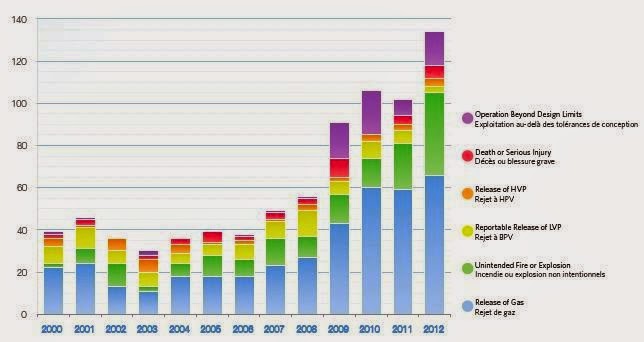 "A truly captured regulator " said Marc Eliesen, a senior energy executive who once served as CEO of BC Hydro, when he quit his role as a NEB intervenor in the Kinder Morgan Trans Mountain tarsands-to-tankers expansion project.

This post an update to Norm Farrell's from 2013 as more players have been added since.

And congrats for being mentioned in the Guardian!

I'm guessing the reason it is a secret is that there are no plans for an emergency response to a spill. My two cents worth...

And the winner is:

It'll be interesting to see how the legal remedy is put in place in the event of a spill. BP is on the hook at the moment for about 4,000$ a barrel for the gulf coast spill. Given how there hasn't been a firm confirmation regarding what spill response resources are a)currently in place b)what will be there in the short term and c)what bare minimum they'll have there in the long term.

Heh. In connection with what?

Silver was commenting on Trudeau's speech in Calgary today on energy & environment:

I had to check first to see if it was the other big story, about Andrew Weaver winning his lawsuit against National Post:

Hi Holly : Got your messages but have comment mod on for posts over two weeks old - cuts down on nutters and spammers marvelously. Thanks for the mention on twitter btw

Oily says to tell you it's always Oily the Splot Day somewhere in Canada.

re : Trudeau and his proposal : "national targets for reducing carbon emissions but would allow provinces to design their own policies to meet them".
Didn't Harper already sorta propose this in his year-end with Mansbridge, saying Alberta's carbon levy pricing system could go broader and suggesting the idea of implementing a national carbon levy?
This would presumably be completely different from the NDP's "job-killing carbon tax" *eye roll*

Holly
Some interesting background for the Trudeau thing; yesterday evening a Calgary restaurant tweeted about Trudeau visiting; and idiot rightwinger Craig Chandler then tweeted to the resaurant asking if they support Liberals. He apparently wanted to avoid eating in a "Liberal" restaurant and also to work up some PR.

He's been in various parties in Ontario & Alberta, never elected. Planned to run for provincial PC's but they talked him into not running but helping with their next campaign. Mistake on their part, he's more likely to lose them votes.

Anyway, he got savaged on twitter and ended up whining about all the liberals abusing him and acting like the Gestapo, etc. Fun to read!

Some of the twitterers were probably partisan Liberals happy to jump on an idiot PC, but there were others too...

Followed that a bit. Storify! Storify!