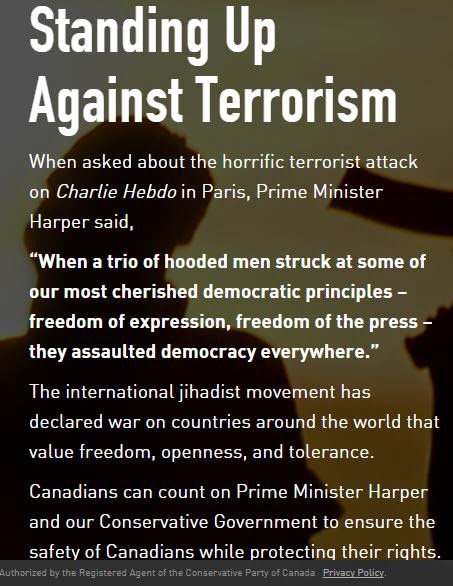 A Message from the Conservative Party Closet Organizer of Canada
.
Posted by Alison at 7:02 pm
Email ThisBlogThis!Share to TwitterShare to FacebookShare to Pinterest
Labels: Stephen Harper, terrorism

I'm sure as hell not counting on stevie and his crowd to protect MY rights, are you, Alison?

Talk about your false advertising . . . .

Or our safety, for that matter.
People being murdered thousands of miles away - what a great opportunity for a little CPC email harvesting.

Ya, I want someone like Harper who left a paraplegic in a wheel chair and some terrified women to take on the shooter in a meeting room while he was soiling himself hiding in a closet. His excuse while being interviewed by Peter Mansdork was that he considered himself to important to stand and defend his underlings.
God help us if this piece of dried up dog shit gets back in to finish off what is left of Canada.CGHZD

Harper is the worst entity we have had to deal with, since WW2 and Hitler.

Harper's cabal are just as bad as he is. No-one with self respect and decency, could ever support a monster such as Harper.

Harper has shown his cowardice, far more than once. Harper's sneak FIPA deal with Communist China, was all done behind our backs, as usual. Harper sneak deal was so secret, he met China in Russia to plot his dirty deed.

Harper the coward prorogues Parliament, so he doesn't have to answer for his crimes. Harper skips the country and leavs his cabal to clean up his mess. Harper the coward hides in a broom closet and/or, locks himself in bathrooms to get his own way. Harper is a coward with his Omnibus Bills, with no pretense of even being, remotely honest and upfront.

Harper is of no importance, what-so-ever. He should have stayed in the boom closet, where he rightly belongs, as a coward.

You made Canadaland yesterday for your piece on Amanda Lang and iGate.

"...If not, were any efforts made within the CBC by Lang or others to notify you of any of these potentials for conflict of interest?"

"No. The first anyone heard of it was when a blogger posted information about the upcoming speaking engagement sponsored by iGate..."