The new Anti-terrorism and the new *anti-Semitism* 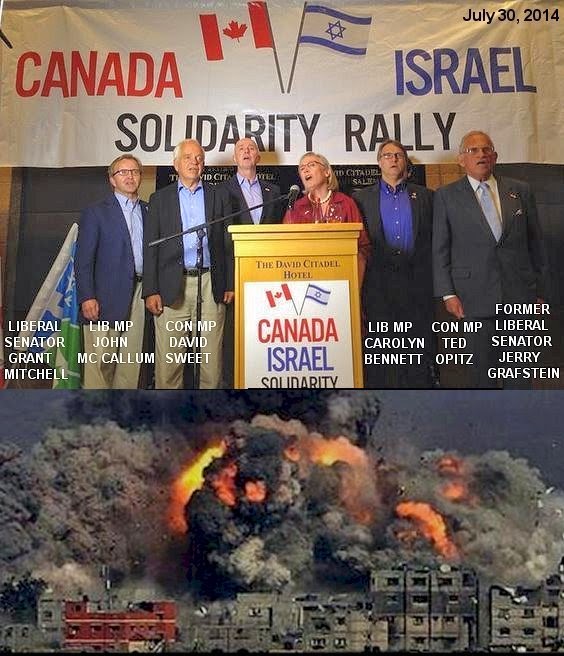 Six months ago while Israel's Protective Edge was reducing 100,000 homes in Gaza to rubble, a delegation of Canadian Conservative and Liberal MPs and senators flew to Israel to demonstrate their support ... for Israel. Here they are shown leading a singalong at a Canada Israel Solidarity Rally at the David Citadel Hotel in Jerusalem.
There were speeches.

"The book of dealing with terrorism is being written here in Israel," said the mayor of Jerusalem in his speech to the rally. "Terror is not just Israel's problem; it's a problem for democracies around the world."


In her speech, the Canadian Ambassador to Israel repeated Harper's phrase : "Canada stands with Israel through fire and water", while John Baird delivered a pre-recorded message of support about "standing shoulder to shoulder with Israel" and "doing the right thing".

Three weeks ago Baird was in the West Bank getting egged and in Jerusalem updating the 2014 "Memorandum of Understanding between Canada and Israel regarding a Canada-Israel Strategic Partnership". From one of the new Canada-Israel 2015 MOUs signed January 18 :

On the same day on their website, Foreign Affairs, Trade and Development Canada addressed the new MOU and "the challenge posed by terrorism", including more "standing with Israel through fire and water" and concluding  :


"Whether the fight against violent extremism is conducted over the skies of Iraq or in the tunnels under Gaza, Canada and the State of Israel are fighting enemies whose hateful ideologies and goals threaten all peaceful, democratic societies. That’s why we are committed to enhancing our collaboration on security and defence, especially in the increasingly important area of cyber-security."

Concern has already been voiced over whether the new Anti-terrorism Act 2015 can or will be used to attack or chill pipeline protest, given one definition of "activities" included in the Act is (f) "interference with critical infrastructure".

But given :
will part (i) below in the anti-terrorism bill be used to advance clandestine activity against critics of Israel's occupation policies? Page 3 :

From Part One : Security of Canada Information Sharing Act

and where the last of nine definitions of "activities" is :

Con terrorism logic here could conceivably argue that criticism of Israel is helping the terrorists, therefore it becomes a terrorism/boosterism issue - another possible use of an expanded secret police force with scant oversight and the power to break the law and violate the Charter. 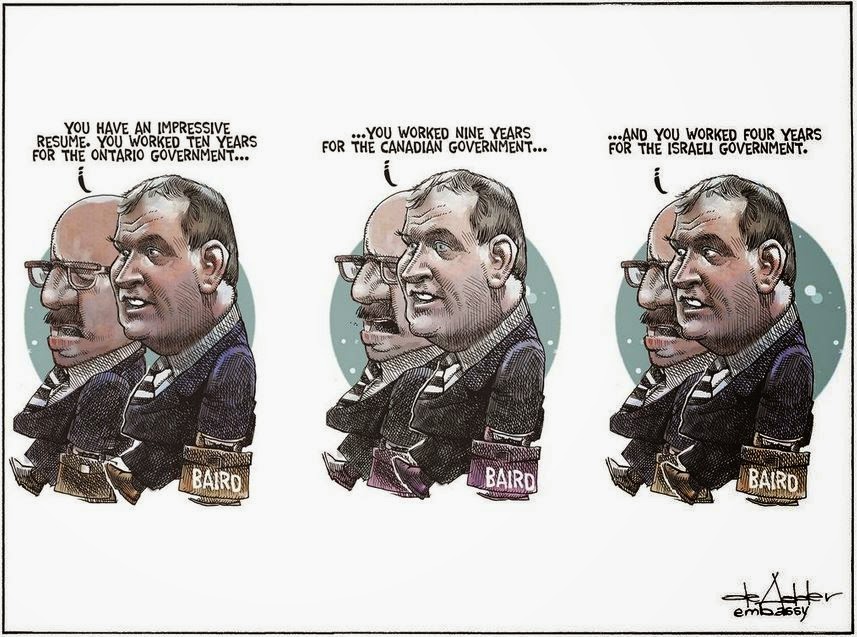 G&M editorial : Anti-terrorism bill will unleash CSIS on a lot more than terrorists

OT but ousted Con MP Eve Adams has crossed the floor to run for the Libs. Maybe they can also bag Rob Anders.

Harper crossed the blue line the red line .. the every line

Sure.. Honoring Canadian Armed Forces Night .. the 9th such evening..
But the parody on ice of Iraq, Afghanistan, ISIS or the Ottawa gunman confusion?

Drones, sand & F-35's were missing.. OK.. CF 18's & choppers too..
and no sign of Commander in Chief Harper driving a Leopard tank onto the ice..
or the Zamboni

The mighty partisan wedge politics of Stephen Harper landed for a puck drop
.. not a word or comment from mainstream media ..
asking who thought this up, approved, collaborated..
Harper, Ray Novak, Defense, CBC, the Leafs.. Canadian Forces

The emails on this bizarre fandango should be stupendous
if we ever see them via.. Freedom of Information (remember that myth?)
or was that Cabinet Confidence..of National Hockey League Security Division .... ?

Salamander : *Jingo bells, Jingo bells, jingo all the way..."
I'd never watched one of those before tonight so backtracked a few years. I see the rappelling from the rafters is a constant and one year featured CF family members whose grads were missed by their dads deployment. This year's had the most kit and, um, wardrama by far.

How do you explain the Conservative's devotion to Israel?

is it racist hatred of the Palestinians?

is it crude cynicism?

is it a specifically nutbar, Christian, Book of Revelations kinda thing?

Thwap : Short answer, I still don't know.
You and I discussed this a year ago, didn't we? after watching vid of Harper in Israel behaving like someone on their first date, or more accurately, like someone after the first time they have sex - blissed out, bumbly, grateful, filled with generosity of spirit... His whole mien while there gave some weight to the argument that Harper is a dominionist/dispensationalist but I'm still not convinced it's anything more than simple opportunism.

As for the rest of them, twice a year the lobby group Centre for Israel and Jewish Affairs (CIJA) sponsors free junkets to Israel for MPs. They stay in very nice hotels and do not get any side trips to Gaza. A quarter of all parties' MPs have gone and over half of that group are Cons - meaning that's a quarter of all sitting Con MPs. There's another junket every year for parl staffers and party boffos but cabmins and parlsecs aren't permitted to accept. All the MPs in the pic in the post have been on these junkets several times apiece.

@ Thwap. Several years ago I stumbled across an organization that united Canadian, American and Israeli legislators committed to the restoration of biblical Israel. My MP, James Lunney, headed the Canadian contingent. There's a post on my blog about this but that goes back four, possibly five years.

Lunney is a fundamentalist evangelical, a real "end times/Rapture" sort. He was a natural to lead Canada's members. The mission statement of the organization called for relocation of Palestinians to Jordan and the restoration of ancient Israel extending right into southern Lebanon.

As I understand it, they must support Israel because until it can reclaim its biblical territory there can be no Armageddon and, absent that, no Second Coming/Rapture/your delusional fantasy here.

I'll have a look for the original post from a few years earlier. It is troubling.

Three and a half years ago Charles McVety's Canada Christian College hosted a Stand With Israel rally against the declaration of a Palestinian state. Sharing the stage with McVety were Jason Kenney, Nathan Jacobson, B’nai Brith Canada CEO Frank Dimant, a rep from Tim Hudak, and others. Kenney gave a shout-out to MPs James Lunney and Mark Adler in the audience. In his speech Dimant called on God to protect Israel from the United Nations "as we await the messianic times which are just around the corner."

Alison, regarding dispensationalism, as I understand it the story goes that when all the Jews return to their homeland, Armeggedon happens and two thirds of Jews are killed in the battle of good and evil while the other third are converted to Christianity for the rapture.
So I get why they freak out at any part of Israel being relinquished to the Palestinians but what is in it for the Jews?

Anon@10:34 : Think of it this way - if I offered to give you a mansion as long as you agreed to turn it over to Zeus when he makes his big comeback, would you turn it down? ;-)

So I get why they freak out at any part of Israel being relinquished to the Palestinians...

You mean Xian zionists? Pat Robertson once said God was going to be mighty pissed if Israel gave away any of His land, but 'replacement theology' as you describe it has fallen out of fashion with dispensationalists. The story is the same but the killing off/converting the Jews part has mostly been ditched. Still, even without it, it's difficult to see how Armaggedon is going to be a boon to tourism in Tel Aviv.