Monument to Victims of Communism ... and friends

"Only a fool would deny that millions have been the tragic victims of communism, but that number pales, surely, in comparison with the victims of capitalism."

And here, in case you haven't seen it, is the winning submission for the Monument :

With $3-million from the federal government on donated land valued at $1-million across from the Supreme Court and announced in the 2010 Speech from the Throne, Harper and Kenney were ground level supporters - presumably due to their oft-sited statistic that one quarter of Canadians are survivors or relatives of survivors of communism.

"The leader of a group receiving $1.5 million [now up to$3M] in federal funds to build a monument to victims of communism says Canada's Prime Minister and Minister for Multiculturalism have been part of the project from the start – a role uncommon for politicians in the creation of public monuments.

“True inspiration comes directly from the PM,” Tribute to Liberty Chair Ludwik Klimkowski told the Toronto Media Co-op in a recent phone interview. “It was Stephen Harper’s idea of recognizing the contribution of people who came from communist countries.”

Klimkowski also said Tribute to Liberty “has its beginnings in 2008 when [Multiculturalism Minister] Jason Kenney was visiting a memorial erected by another group,” but declined to answer further questions about the politicians’ histories with the organization."

I wonder what that 'other memorial erected by another group' might be? 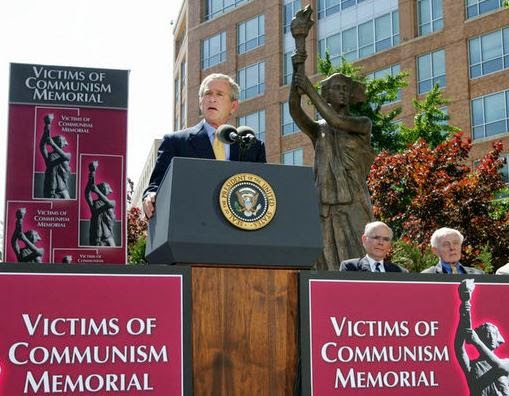 In 2008, the three founders of the Canadian Tribute to Liberty were :

In 2009, after Harper had written to Kenney assuring his support for the monument, the National Capital Commission, an advisory board on commissions to the parliamentary grounds, suggested changing the name of the monument :

"It’s not communism itself that we should be fighting here. It is rather totalitarianism we are against in any form."

Well, that didn't fly and ultimately the government also ignored the majority of the commission's choice of design for the monument. The monument's footprint is to be in place in time for the October election; it has the backing of all four of the major parties.

Meanwhile regarding victims closer to home, Stephen Harper told Peter Mansbridge in December re missing and murdered aboriginal women that : "… it isn't really high on our radar, to be honest."

.
Posted by Alison at 8:15 am
Email ThisBlogThis!Share to TwitterShare to FacebookShare to Pinterest
Labels: Con fuckwittery, Jason Kenney, Monument to Victims of Communism, Stephen Harper

Wow this information could be embarrassing and make the prime minister look hypocritical in his actions. Someone should tell him not to sign and lock Canada in a 30 year trade deal with communist China while in communist Russia.
Did he know where he was when he signed that clearly un Canadian un democratic piece of legislation ? Or was he enraptured with his thoughts of a future fascist Canada with his little hands on the levers.

"...it has the backing of all four of the major parties."

That's slightly depressing, thought I'd guess none of them would want to be labeled Commie sympathizers.

Jason : Well, he knew he was beyond the range of Canadian reporters at the time at any rate. ;) The monument has also been seen as a fuck you to the 100 year old plans to build a Federal Court building on the site or as a fuck you to the Supreme Court across the street.

Anon@4:56 : As late as 2009 there were public protestations from officials that the name of the monument would be a slap in the face to a legal political party in Canada, the CPC-ML. We're not hearing those voices now. Elizabeth May made a moue and was the first AFAIK to quip about a monument to the victims of capitalism but she still wrote a letter of support.

Did you see this Alison?

Jennifer : No I hadn't but it seems the Ottawa Citizen Editorial Board agrees today: Move the Memorial.

Steve thinks : Hmmm ... snobby elitist bunch of architects who use words like splendid, vs fabulous political wedge issue with bonus red-baiting to base... No brainer!

We're going to see a succession of these wedge issues leading up to the election - the anti-terrorism bill is another although that's hardly its only purpose - designed to cow the opp parties into capitulating rather than being smeared as pro-Putin/Stalin or pro-Jihaddist/terrorist. They could agree to strongly resist being suckered like this and openly fight back but they won't. Currently, G&M and Ottawa Citizen edi boards providing better opposition, which rather undercuts the usual argument that opp parties can't win these arguments due to media bias.

P.S. I rather liked Canadian Cynic's suggestion that the monument would make an awesome skateboard park if they just rounded the tops off the pointy concrete ridges.

I do SO enjoy the tweets of the Cynic!