Hilarious G&M editorial election endorsement today: "His party deserves to be re-elected. But after Oct. 19, he should quickly resign."

In other words, as Antonia Zerbisias put it : "The flying monkeys but not the wicked witch"

Editor-in-Chief David Walmsley then went on Faceplant to perform the 'little man behind the curtain' sketch. He bombed.  #MoreGlobeEndorsements followed.


"Only Stephen Harper and the Conservative Party have shown the leadership, the bullheadedness (let's call it what it is) and the discipline this country needs.

.... during his five years in office has demonstrated strength of character, resolve and a desire to reform ...

Those who disdain the Harper approach should consider his overall record, which is good. The Prime Minister and the Conservative Party have demonstrated principled judgment ..."

With few exceptions, the rest of the media Munchkins also follow the yellow brick road of Harper endorsements with a yellow front page Con attack ad buy today ...as they have for the entire nine year Harper regime. 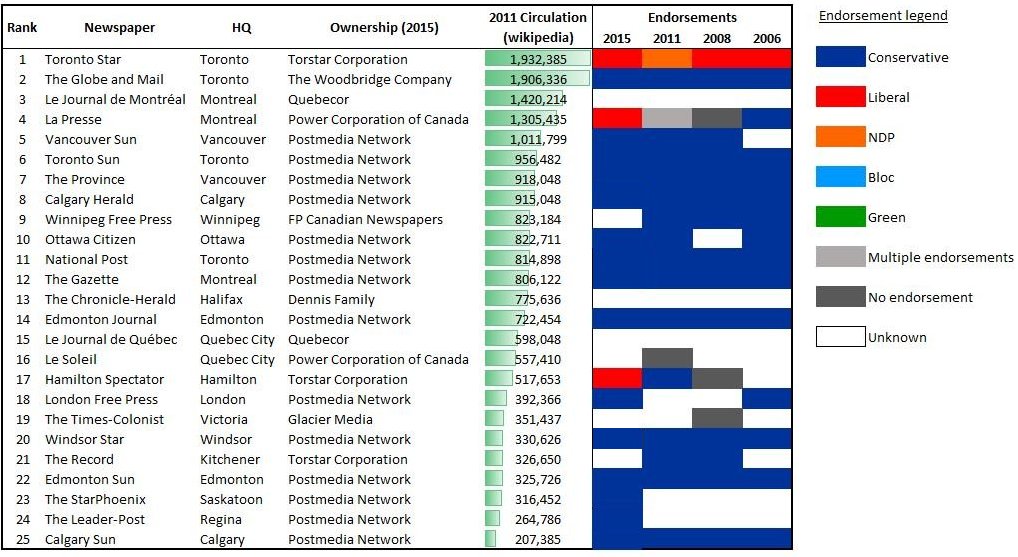 Also : Not only the Ottawa Citizen but the PostMedia chain is apparently running the same attack ad on their front page today, using Elections Canada's trademark yellow. Note : not merely an endorsement for the Cons, but an attack ad that mimics an Elections Canada notice. 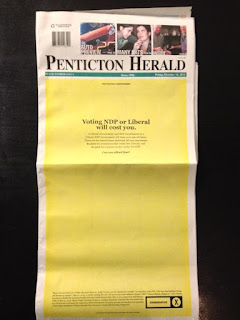 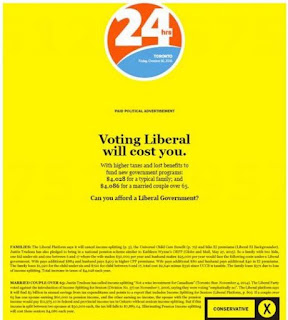 Who are you getting your news from lately?
.

The Vancouver Sun has thrown out all restraint and gone all in on Harperman and his miserable minions. Mind you, they hd made that commitment before the campaign started.

The best part are the comments following the editorial codswaddle.

CANADALAND reports that the Postmedia editorials are ownership's view and not 'true' editorials. This has lead to the absurd National Post parroting ownership, and muzzling the head of their own editorial board: Andrew Coyne.

Coyne wants to do his own thing and ownership - through the National Post - is stopping him.

I have a hard time keeping track of who isn't in the post/sun/quebecor umbrella.

Newspaper endorsements are kind of and odd brainwash-y thing. It's so blatant yet I can't help but feel that it's an irrelevant part of the process.

As though joe blow is going to pour over this morning's weekend edition, not having any idea yet how he's going to vote and just out of sheer editorial fortitude be CONvinced that he should vote a certain way.

Who are you getting your news from lately?

None of these Corporate Media outlets, that's for damn sure, Alison . . . .

Thanks Harperman for making yellow journalism easier to spot.

Postmedia puts a yellow niqab on all its newspapers.

"Elections Canada's trademark yellow", you say. Looks more like the colour of urine to me,

So G&Mpostmedia have essemtially endorsed a headless Tory government? That's so...weird. I mean can you imagine what that would look like? No talking points and scripts for the MPs, no iron fist of control. They'd be spouting off this and that in some kind of Sleepy Hollow freak show. I for one would almost pay money to see that meltdown, except for the risk that they'd ruin a lot of lives at probably try to invade Russia in the 43 days before they imploded.

The REAL danger is not "Harper" but the neocon "Conservative" party itself.

Their glorification of the militarization of Canada, financial repression, their propping-up of the artificial housing bubble, their religious overtones, the deification of authority, the fake "War on Terror", the attack ads, the failure to abolish the gun registry...any number of anti-liberty policies are far more damaging than Harper himself.

Remember the "Progressive Conservatives"? Look rather quaint now, don't they? Sometime in the 1980s small-'c' conservative parties in the developed world began to morph into the neocon moralizing authoritarian monstrosities with which we are burdened now. Australia has one in power. The US has Obama and his fellow neocons. The UK has Cameron. Japan even has one, Abe Shinzo. So does much of Europe. And of course we do too.

No matter how awful the big-spending, economically illiterate opposition parties look, nothing could be worse than a continuation of the present mixture of economic illiteracy coupled with authoritarianism.

Canada could tomorrow be the FIRST US-toadying western nation to toss out their neocon machine!

Whoa yeah! The parade should be marching across the masthead of every ballot. Gonna be big, ballots, very big. Voters are designing the next election right now, today.