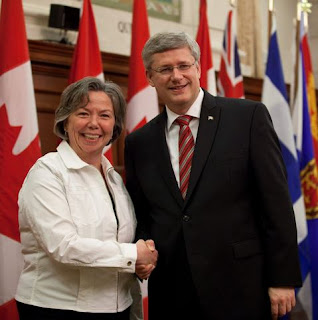 Winnipeg Free Press columnist and event moderator Don Lett described what he called her "enemies of Israel list" as "creepy".

But really why wouldn't she play the anti-Semitism card again?
This is her second campaign running with it :


"Three years ago, the Conservatives sent flyers to Jewish homes in Mount Royal, Liberal MP Irwin Cotler's riding. The flyers claimed the Liberals had participated in a UN conference known as Durban I that descended into anti-Semitism. They also said a Liberal MP had shown support for Hezbollah, a designated terror group.

Bateman's Elections Canada file shows she sent out a letter from a prominent lawyer and businessman. The letter included examples identical to the ones used in the Mount Royal flyers."

The year before, former Conservative Party president, Vic Toews campaign manager, and now Senator Don Plett, sent out taxpayer-funded flyers into Neville's riding. This time the charge was that she was insufficiently tough on crime and Plett wanted a revealed list of dangerous young offenders. Because this is what we pay senators to do.

Senator Runciman, "who distributed almost identical material" explained it was the “Conservative campaign folks” that put him up to it.

"It's hockey, not figure-skating," explained a source in the Con war room.

Fun fact : Bateman was a Liberal herself up until 31 days before the 2011 federal election when she decided to run as a Conservative against Neville.

Bateman beat Neville by some 700 votes in the riding receiving the second highest number of bogus robocalls in Canada. Elections Canada declined to investigate despite voters having been misdirected to take a 20 minute drive out of the riding to a non-existent polling station.

And so it goes ...
.
Posted by Alison at 7:48 am
Email ThisBlogThis!Share to TwitterShare to FacebookShare to Pinterest
Labels: Anita Neville, anti-Semitism, Election 2015, Joyce Bateman, robocalls

Bateman has been an opportunist since her days on the Winnipeg School Division Board. How she came to be an MP is beyond my comprehension.

And now even Elections Canada is getting involved in the voter misdirection.

Ah well, ... Canadians don't appreciate their democracy. So scum like this Bateman person might be what we deserve.

CBC has a clip of what she said. She doesn't specifically say "enemies list" unless that was before the clip starts, I'm not sure they included all of her introduction. The reaction of the other two speakers was good.

It's the last clip in this article
http://www.cbc.ca/news/politics/canada-election-2015-neil-macdonald-muslims-1.3257892

Holly Stick : Agreed, which is why I don't say that she said "enemies list".
I said : "...event moderator Don Lett described what he called her "enemies of Israel list" as "creepy"."

The intro I watched from her went : "Well you know where I stand on the economy. I just want to, in deference to B'nai Brith's hospitality tonight, to share a few of the people who are going to be part of Mr. Carr's team. Omar Algebra, his colleague Liberal candidate, who called Israel's efforts to defend itself ..." interrupted by the crowd going boo, boo, boo.

Thanks for the link to Neil Macdonald's excellent piece. I thought this part on identity politics and the Cons dog whistle use of the phrase "barbaric cultural practices" was good :

"Just out of curiosity, I called the RCMP's media relations department to ask about this new task force and what sort of barbaric cultural practices would merit a call to the Mounties.

The officer who answered said that if, say, an honour killing is taking place next door, it'd be best to dial 911 and tell the local police.

Otherwise, the force said in an email about 20 minutes later: "It would be inappropriate for the RCMP to comment on a political announcement."

Thwap : Where are the examples of Elections Canada getting involved in voter misdirection? I'm not convinced the usual percentage of mistakes on voter cards from them qualifies, given 70% of ridings have changed their boundaries and/or names for this election.

Understanding the unlikelihood of successfully getting a question to any Con, and the even lower probability of getting an answer, I don't suppose the opportunity to ask any Con about the RCMP's non-response on 'barbaric cultural practices' will present.

So, is it a "political announcement" only? Or have the RCMP been caught politicking for the Cons?

BTW, the Europods have cultivated systemic and systematic racism against First Nations for hundreds of years, disenfranchising them, stripping legal recourse for illegal acts done to them, namely, kidnapping and concentrating their children in residential schools (where psychological, sexual and physical brutalities were perpetrated as a matter of course), and concentrating their parents in tiny reserves, among other things too numerous to list here, but all, if not most, being uncivil and barbaric.

The above being both cultural and barbaric, should I phone the cops now, or do I need to wait until the election's over?

People assume the booing from the crowd was directed at Bateman. It's just as likely they were booing at the Liberal names Bateman was reeling off.

I have never heard before of Elections Canada making these mistakes. It's supposedly their job to know where people are and where they're voting.

If the letter gets to the right address then how is it they don't know where their own polling stations are?

Have you ever heard of such mistakes in the past? Or is the "Liberal media" choosing to make a scandal out of an unremarkable occurrence?