Not even remotely effing safe for work 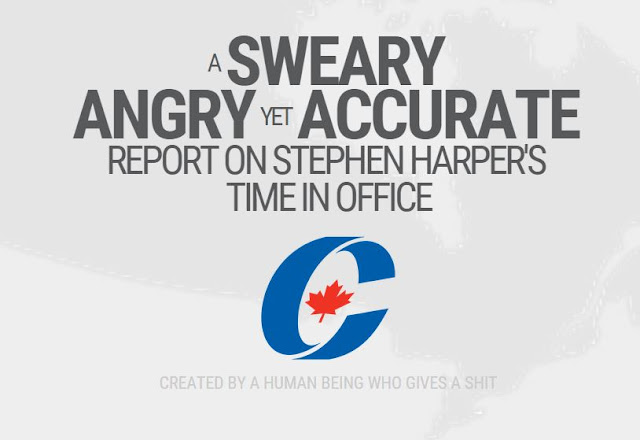 continued ....
.
Posted by Alison at 10:25 pm
Email ThisBlogThis!Share to TwitterShare to FacebookShare to Pinterest
Labels: Election 2015, Stephen Harper the Economist

Very accurate description of his decade in power . . . .

No matter how much you may "hate Harper", always remember that the REAL danger is not "Harper" but the Conservative Party and its agenda.

Notice their neocon/"security"/control agenda, the legislative moralizing, the deification of militarism and military "service", the religious overtones, the big-spending money-printing, the financial repression, the coddling of banks, the promotion of "muslim terrorism" as a "threat"?

Seen this before, in other countries' neocon administrations?

Canada is another US toady, just like the UK, Australia, the EU, Japan and many western puppet governments in Asia and elsewhere.

What you are describing, cocoabean, and the countries that subscribe to it, is called neo-liberalism.