Democracy and Parliament not sidestepped, only suspended 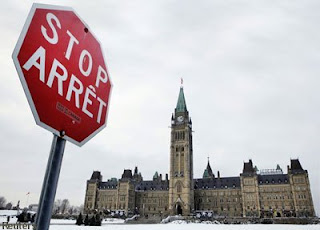 We would like to thank Con MP Brent Rathgeber for that lovely explanation of Steve's dismissal of parliament - first ignoring its will and then proroguing it - and move on to how the media props up that contempt by ignoring it.
.
With a little help from his friends ...
.
As pointed out by POGGE here and here, CBC and CTV/CanWest both blew their year-end interviews with Steve.
.
Mansbridge took a stab at getting some explanation from Steve on why he prorogued parliament but then allows Steve to blow him off with bafflegab about how Canadians don't care about it anyway. The question Mansbridge should have asked is why Steve is ignoring a parliamentary motion to hand over unredacted documents on the Afghan detainees and did he shut down parliament to avoid doing so?
.
At least Mansbridge gave it a shot. In their year end interview, the CTV/CanWest tagteam of John Ivison and David Akin don't even mention proroguing or detainees, never mind ignoring the will of parliament. They just skip the whole friggin thing. In fact their interview, which ran in the National Post, opens with this :

IVISON: "Prime Minister, it seems there is not going to be much for us to write about, unless there are Senate appointments in our near future."

Yup, year end review, not much goin' on here right now. What ever will we write about?
.
In his blog entry : Interviewing Harper: What to ask? Why not ask about prorogation? David Akin explains that Mansbidge already covered that issue - no, David, clearly he did not - and that they did not have much time to ask questions that could be rewritten up by their affiliate papers :

"[T]he goal for Canwest, at least, is to leave the interview with a story that the local editors of the Vancouver Sun, Montreal Gazette, Ottawa Citizen and other Canwest papers would find interesting enough that they would make (valuable) space for in their papers."

Yet within that admittedly short 13 minutes there was apparently ample time for questions like this :

AKIN: Do (you) see yourself in a decade -- you may not be prime minister -- do you see a career for yourself after this? I don't sense you're the board of directors type but I don't know, maybe you are -- an academic? What do you want to do? Where are you in a decade?"

Steve in a decade? Who gives a rat's ass? We want to know where our parliament is right now.
Akin responds in comments at Pogge's.
Happily the conservative US UK mag The Economist, in two separate articles, goes straight to the heart of what the Canadian media to a truly frightening degree ignores :
.
Harper goes prorogue
Parliamentary scrutiny may be tedious, but democracies cannot afford to dispense with it

Never mind what his spin doctors say: Mr Harper’s move looks like naked self-interest.
His officials faced grilling by parliamentary committees over whether they misled the House of Commons in denying knowledge that detainees handed over to the local authorities by Canadian troops in Afghanistan were being tortured.

A legislature matters more than the luge
Mr Harper is a competent tactician with a ruthless streak. He bars most ministers from talking to the media; he has axed some independent watchdogs; he has binned campaign promises to make government more open and accountable. Now he is subjecting Parliament to prime-ministerial whim. He may be right that most Canadians care more about the luge than the legislature, but that is surely true only while their decent system of government is in good hands. They may soon conclude that it isn’t.

Canada without Parliament - Halted in mid-debate
Stephen Harper is counting on Canadians’ complacency as he rewrites the rules of his country’s politics to weaken legislative scrutiny.

The danger in allowing the prime minister to end discussion any time he chooses is that it makes Parliament accountable to him rather than the other way around.
It is now up to [the opposition] to show that Canada cannot afford a part-time Parliament that sits only at the prime minister’s pleasure.

One would hope it would also be a matter of some concern to the Fourth Estate.
CANADIANS AGAINST PROROGUING PARLIAMENT - 92,000 120,000 140,000 and counting ...
On Facebook .
.
Posted by Alison at 1:51 pm
Email ThisBlogThis!Share to TwitterShare to FacebookShare to Pinterest
Labels: Canwest, CBC, David Akin, detainees, Mansbridge, media bias, proroguing democracy

Good post, Alison, but The Economist is a British publication, which probably explains why they know something about parliamentary government.

In ten year's time, fat stephen will be getting out of prison.

if he behaves himself.

almost at a hundred thousand!

thwap, you just know he'll come up with some nasty vindictive remark just when the parole board is considering letting him out...

Alison, I just read an interesting comment by "A reader" at Maclean's, a post by Aaron Wherry:
http://www2.macleans.ca/2010/01/08/how-many-government-mps-does-it-take-to-host-the-olympics/#idc-container

This sentence really stood out for me:

"...And boy, is the government every going to feel dumb if some kind of strike pops up around the Olympics and they can't recall the House to pass back to work legislation..."

Holly : Organized labour officially very much behind the Games because of the jobs created. CLC Pres Ken Georgetti was on the Olympic Bid Committee and also on the board of Concert Properties - the company VANOC has contracted to oversee the Games' many construction projects. Also many ontracts were negotiated to not expire till after March 2010 - BC public service workers were given signing bonuses for this - and CUPE, teachers, ferries, hospital workers - all signed on, ASAIK.

The only coach service running the highway from Vancouver to Whistler - cars will be restricted - was threatening something a month or so back. Not sure if that was settled yet.

While I think it rather overwhelming-unto-defeat-the-purpose of using the bourgeois venues of transcendence like the Olympics for the business-as-usual-complaints of the whatever political alliances of this and that, Holly Stick has, in comments, graced upon the idea of the necessity of using the approaching Whistler-in-the-dark as a means for any-Canadian to express, politically upon-grievance because the democratic process has been suspended by the presumption of the democratically ordination of Harperism. After this anything goes, doesn't it?