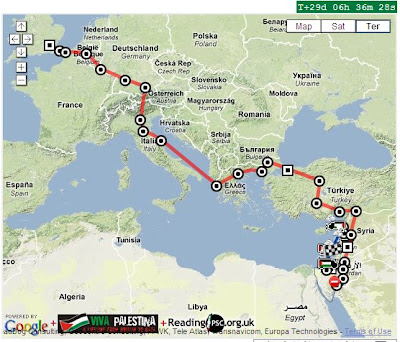 The third Viva Palestina convoy of 198 vehicles bearing humanitarian aid is due to enter Gaza today.
It was held up by Egypt, long the 2nd largest recipient of US military aid, who demanded that the convoy request permission to enter Gaza from Israel, the single largest recipient of US military aid til 2004 when Iraq took over the #1 spot.
.
According to AllGov, Israel has received $3 billion a year in US military aid since 1985, but "must spend 75% of its help from Washington on military hardware made in the USA."
.
War is a racket, as is its attending foreign aid.
.
Buy a T-shirt 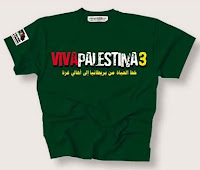 in support of the third 'Viva Palestina' convoy here.
Follow their progress here.
.
Monday Night Update :
Small ruckus at the border when Egypt permitted entry to the first 157 convoy members to arrive but not the 400 due tonight.
Sit-down strike from the 157 and now it looks as if the whole convoy will be permitted to enter tomorrow after all. We'll see.
.
Viva Palestina!
.
You would think that 528 people from 17 countries in a 150-vehicle convoy carrying hundreds of tons of humanitarian supplies all the way across Europe to Gaza would rate at least one line somewhere in the North American media, wouldn't you? But you would be wrong.
.
Tuesday Noon Update : Currently there is a stand-off in El-Arish, Egypt, between the convoy and hundreds of Egyptian riot police armed with water cannons. While the convoy members have been granted permission to enter Gaza, 90 of the now 400 vehicles - the ones from the US - have been refused entry. Convoy digging in, refusing to abandon the vehicles.
Shit. This could get ugly.
.
Posted by Alison at 8:16 am
Email ThisBlogThis!Share to TwitterShare to FacebookShare to Pinterest
Labels: Gaza, Israel, privatizing war, Viva Palestina, war is a racket

just before christmas i got my package to gaza organized.
someone from the gulf islands was going. hope my grandaughter's angora hat gets there and the art supplies, sweaters, etc. too.
sent a donation sunday evening using paypal.
egyptian government email they provided, bounced.
will try to find the right one to resend my letter.
again, not much press coverage.
will request cbc provide updates

As I said at BnR, I wish some journalist would buttonhole Mr Infandous and get a quotable splutter or two from him about Galloway's latest success.

Skdadl : A success written about everywhere but in North America.
I guess Mr Infandous is no longer blogging at NRO.