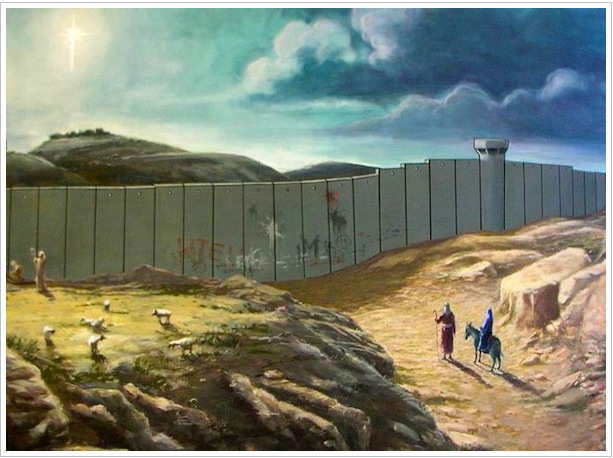 Five years ago, BBC correspondent Aleem Maqbool walked from Nazareth to Bethlehem, retracing the route taken by Mary and Joseph by donkey as told in the Bible.
For ten days he and his donkey successfully negotiated the queues, turnstiles and x-ray machines at some military checkpoints while being turned away at others despite his foreign passport and Israeli press credentials. 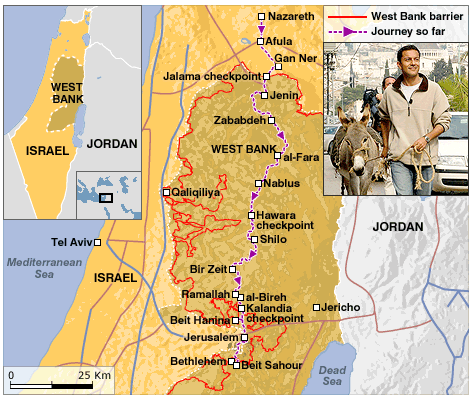 On the morning of December 22 on his trek, he talked to a New Yorker who had emigrated to the Jewish settlement of Shilo built on Palestinian land in the middle of the West Bank.

That evening he stayed with a Christian family in Bir Zeit.


I was told that the family's former house and the land around it had been confiscated by the Israeli army as it was next to the checkpoint to the north of the village (which I had entered earlier). There had been no compensation, they said.

Earlier this year, the younger son had been arrested by the army in a 3am raid on the house. His brother told me that he had been held without charge (something the Israeli authorities call "administrative detention") for six months before being released.

Fun fact : The 4,000 square meter Stephen J. Harper Hula Valley Bird Sanctuary Visitor and Education Centre in Israel will be built an hour and a half's drive northnortheast of Nazareth. It was announced at the yearly Negev Gala in Toronto earlier this month.
A week ago, in response to international protest, the Israeli government temporarily shelved plans to forcibly evict 40,000 Bedouins from their 'unrecognised' ancestral villages in the Negev and move them to government-designated 'towns'. Bedouin homes in the Negev are destroyed for not having the necessary Israeli permits.
.
Posted by Alison at 12:17 pm
Email ThisBlogThis!Share to TwitterShare to FacebookShare to Pinterest
Labels: christmas, Israel, Palestine

Steve doesn't pay much attention to Israeli persecution of Christians, does he?

"Israeli security forces arrived with bulldozers at a piece of property owned by the Catholic Church in east Jerusalem, close to the West Bank city of Bethlehem. They said it had been built without a permit and proceeded to destroy it. The property had been standing since before Israel annexed the area after the 1967 Six-Day War."

It was announced at the yearly Negev Gala in Toronto earlier this month.

I thought stevie frowned on "rich galas." Funny how times change in reformaTory-Land, isn't it?

Guess he figured no one would remember that comment, huh?

Another sacred site, eh? At least it doesn't appear to be covering up some Palestinian village, unlike Canada Park.

I grew up donating to campaigns to 'plant a tree in Israel', thinking it was about reforesting the desert, and all the time it was really about creating parks on top of bulldozed Palestinian villages.

'The site of the village is now a National Park,' said Fr. Suleiman. 'At the entrance to it they have put up a sign saying that "Bar'am Antiquities" date from the Second Temple Period. [...]
'We've been edited out of history,' said the old teacher. 'They don't admit to our existence. Or to the existence of our fathers and grandfathers and great-grandfathers.'
'I and my father dug a well,' said Wadeer. 'Now there is a sign there saying that it was built by someone called Yohanan of Bar'am at the time of the Romans.'
'Who is Yohanan of Bar'am?'
'Apparently a leader of the Jewish Revolt in 66 a.d.,' said the teacher. 'Though we in the village had never heard of him until the park was built.'
'They've made it as if my well is part of ancient Jewish history,' said Wadeer. 'But I dug that well with my own labour!'
From the Holy Mountain William Dalrymple

Yeah, I remember those plant a tree campaigns too - supported through Canadian elementary schools, IIRC. Had no clue.

From the Holy Mountain by William Dalrymple, published 1998

"a stirring elegy to the dying civilisation of Eastern Christianity", Dalrymple also retraced a journey from the Bosphorus to Egypt