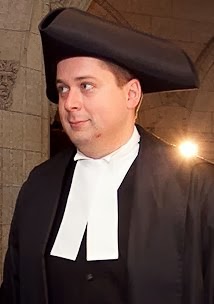 Today, Steve's partisan puppet Speaker Andrew Scheer punted a decision about Brad Butt lying to the House twice about personally witnessing vouching election fraud back to the House for debate. Because you can lie in the House, apparently - you just can't use the words "lie" or "liar".

You'll recall this bs about vouching encouraging voter fraud was the excuse the Cons gave to explain why they want their Fair Elections Act to prohibit vouching in future elections. And Butt sits on the committee studying it - PROC, the Standing Committee on Procedure and House Affairs, consisting of 6 Cons, 3 NDPers, and a Lib.

So a motion on whether to send the matter of Butt making shit up over to the committee Butt sits on for further study was debated until House Leader Peter Van Loan signalled he would call closure on it. So that's that - end of story.

Part of the debate on Butt's calandra-ing consisted of nutter Con MP Steven Fletcher, himself a former Minister for Democratic Reform, trying to bring a motion he termed "contempt of Canada" against the NDP because they declined his invitation to stand up as one and proclaim Canada's political system is better than Russia's.

Unlike the Cons, at least people in the Ukraine already know that.
.
Tuesday vote :
That the question of privilege related to the statements made in the House of Commons by Butt be referred to PROC : Yes - 110 ;  No - 152
- with 1/5 of NDP and 1/3 of Libs not present for the vote, not that it would have made a difference to the outcome.
So there we have it - lying in the House now officially approved .
.
Posted by Alison at 4:43 pm
Email ThisBlogThis!Share to TwitterShare to FacebookShare to Pinterest
Labels: Brad Butt, Fair Elections Act, Procedure and House Affairs Committee, Scheer, Steven Fletcher, Van Loan

I watched this Alison, on CPAC. There were excellent statements and questions from the NDP and then the Fletcher "filibuster" strategically took the debate to lala land before Van Loan punted it into the trash. How on earth does this happen? What do you do when the Speaker is out of Order and in Contempt? We have no precedent for that.

Reading Fletcher's comments evoke the opposite feeling that he is trying to espouse. If a member of parliament can stand in the house and say that another fellow party member doesn't even have to apologize for flat out lying in the HoC, they just need to compare our country with Russia and that would be enough for him. Both of those individuals should be censured and have a brown paper bag placed over there heads.

I am sure that eventually a good many members of the HoC would be donning paper bags.

I suppose the other angle to look at all of this is that what if Butt wasn't actually lying but speaking from experience? He's coming from a background in the apartment development industry so likely spends a lot of time moving and shaking in the lobby area of apartment buildings. If he says he witnessed such a thing happening, then it could only be from the perspective of someone who was actively involved in a scheme to commit election fraud. As he would have to have been following the fraudsters around as they picked up the cards and using them to defraud the riding results.

Few points reported around this suggest that no complaint by Butt had been filed detailing these alleged incidents. Which if he can speak so passionately about something occurring but then have a complete reversal and retraction suggests that his minders realized the extent to which he had blundered and forced him to take a step back what may just as likely have been closer to the truth.

This is the Cons after all.

.. good luck to Brad Butt in the next election, if Herr Harper or the mysterious new PMO division of trolls deems him worthy of renomination..

& don't expect another peep from this dreamy memory challenged freak after undressing himself, Harper and the so called conservative 'values' on parliamentary tee vee.

Comrade Van Loan was forced into tedious service & a breathy attempt to firehose the Butt Pants On Fire Affair with long winded ludicrous confusing runs off at the mouth rhetorical sentences delivered to empty seats, empty ovations by empty headed 3rd string backbenchers moved into the background like Potemkin Villagers.

This 'government' and its flock of shallow MP's & delirious Ministers reminds me of Thanksgiving.. or better said.. the weeks preceding Thanksgiving.. when the strutting turkeys in the barnyard.. uh .. .. end up in the freezer

Harper Inc .. seem to feel they are immune, glorious, invisible, all knowing, righteous & bound for glory and The Rapture, with diluted bitumen & pipelines as their sword & China & its supertankers as their sworn brethren ..

When this smelly and greasy Harper cabal goes down, screaming and kicking with their lawyers, lobbyists, schemers & robocalling election fraudsters .. all of Canada will see them for what they are ..

.. Grade A Toxic Turkey - Consume At Your Own Discretion ...