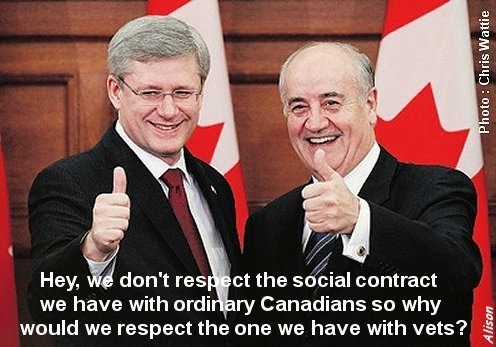 According to lawyers for the Attorney General fighting the class-action suit filed by six Afghanistan veterans, the social contract Prime Minister Robert Borden promised to Canadian Armed Forces and their families just before Canadian soldiers went off to Vimy Ridge in 1917 was just a politician talking so they are under no particular obligation to honour it.


"The defendant further pleads that at no time in Canada's history has any alleged "social contract" or "social covenant" having the attributes pleaded by the plaintiffs been given effect in any statute, regulation, or as a constitutional principle, written or unwritten.

The terms "social covenant" and "social contract" have been used at various points in time by a number of different groups and in a number of different ways to describe the relationship between members of the CAF and the government and people of Canada. No set of principles exist that can be stated with certainty, understood with clarity, or accepted with unanimity among the people of Canada to define a "social contract" or "social covenant" as alleged."

Really? I could give you a really simple one that everyone in Canada except you agrees on even without Borden. When you send soldiers off to risk life and limb in some foreign Great Game adventure, you better have a really good fucking plan in place for them when they get home.


"The defendant pleads that the statements made by Sir Robert Borden and the coalition government in 1917 were political speeches that reflected the policy positions of the government at the time and were never imended to create a contract or covenant."

This is their third argument against the vets.
The first one sought to dismiss the case on the grounds the vets had no hope of winning it. The second one argued that court was not the appropriate venue for members of the Canadian Armed Forces to express their concerns - which pretty much exudes the very definition of a special social covenant in itself. 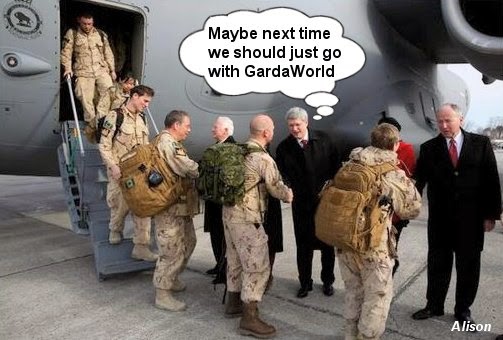 Next time Steve is in the mood for a military adventure, perhaps he should consider hiring mercs or contractors from a Canadian firm like GardaWorld instead. In Canada we think of Garda as a Brinks security trucks competitor that also does airport screening but you may recall the first daylight abduction and eventual assassination of four British ex-servicemen at gunpoint in Baghdad in 2007 were employees of GardaWorld, "one of the world’s largest privately owned security companies."

Derek Burney is Chairman of GardaWorld's International Advisory Board.
Brian Mulroney's chief of staff, head of the Steve's government 'transition team' in 2006 and a member of the Afghan panel which advised extending the Afghan mission, Burney worries about Canadian "aversion to war-fighting".

Another GardaWorld luminary is Daniel Menard, former Canadian head of the NATO-led Task Force Kandahar in 2009, during which time he had 2800 Canadian troops under his command before he was court-marshalled in 2010 for canoodling. He returned to Afghanistan the following year as head of Afghan operations for GardaWorld after the Department of National Defence paid $40,000 to relocate Menard to his new job headquarters. There was also that bit of unpleasantness about him being jailed in Afghanistan for alleged gun smuggling on behalf of GardaWorld earlier this year but that's all straightened out now.

A Freedom of Information request to the British Foreign and Commonwealth Office for the amounts the FCO spent hiring "Private Military and Security Companies from Nov. 2010 to March 2012" reveals they paid GardaWorld £56,000,000 for security services in Iraq from Dec. 09 to Jan. 13 and £1,740,000 from Feb. 11 to July 11 for the same in Libya.

Next time the Cons decide it might be a good idea to participate in some war , lets do it "old style", when leaders led their armies into battle. That ought to keep the Armed Forces home. If we have to go to war, lets send the P.M. and the cabinet ministers first. Let them pick up guns and live in the hell war is. Until they are prepared to do that, they ought to keep their mouths shut and keep our Armed Forces at home unless they are prepared to give the returned military personnel the "gold plated" pensions and health benefits the M.P.s and senators are getting for sitting around nice and warm or nice and cool with limo drivers and all the comforts of home.

When you send Canadians off to war the military personnel have a reasonable expectation they will be treated well, not thrown under the bus by a government wanting to save a few bucks.

At one time, certainly in the 1970s veterans had first crack at government jobs if they had the qualifications. Now they can loose both legs and be given a settlement and told, don't bother us again. The Conservatives are disgusting. Using tax money to fight the Veterans in court.

Thanks for the drawing up the lines for Garda Alison. A lot of lovely Mulroney hires continuing to rake the depths of acceptability.

This reminds me of a Comment I saw posted on laurak's wmtc blog yesterday. It was in response to a william krystol (infamous neo-con war-monger chicken-hawk in the Excited States) lament that the US was growing war-weary. The response was in an Esquire blogpost by Charles P. Pierce:

Blow me, you monstrous, bloodthirsty fraud, you silly, stupid chickenhawk motherfker who plays army man with the children of people who are so much better than you are, and who would feed innocent civilians in lands you will never visit into your own personal meatgrinder to service your semi-annual martial erection. You and the rest of your cowardly cohort helped prepare the ground for the worst geopolitical mistake the country has made in 30 years. You fought the battle of the Green Rooms and the think tanks while other people's sons and daughters died for your fantasy of how the world would work if you really were the pimply, adolescent Zeus you see when you look in the mirror every morning. The country does not need you lectures any more. The country does not need your counsel. The country does not need your advice. And, as sure as human beings have become dead because of your lectures, and counsel, and advice, human beings about whom you otherwise care nothing, the country does not need your hectoring that it has become insufficiently bellicose to fulfill your newest, blood-drenched fantasies. Even here, even now, you hide behind the skirts of a woman from Indiana who, while I believe her to be wrong, seems to be genuine in her beliefs. You are unworthy of her intellectual camouflage. You should be driven from polite society, consigned to an ideological Molokai so you can no longer infect the rest of us. People should shun you. You should wear the bell for the rest of your miserable days.

Thank you, Bob. Wonderful piece from Charles Pierce - what a marvelous writer he is.

e.a.f. : 30 hours after he got into a dispute with his brother in BC in 2012, Greg Matters was shot twice in the back and killed by RCMP who entered his property in camo gear with M-16s and a helicopter but no warrant.
A 14-year CF veteran being treated for PTSD from his time in Bosnia, Greg Matters' military pension was $123 a month.

Meanwhile, Harper gives Alberta's oil industry $1.3B a year in public subsidies. Money that should go to veterans is given to industries making huge profits. (CIDA funds are now going to mining companies.) He also spends tens of thousands on advertising for the oilsands. Apparently these wealthy companies can't afford advertising.

There's also their new foreign policy shift, Global Markets Action Plan - because everything is an Action! Plan! with these guys!- with a permanent business advisory council paid for by us:

"The Global Markets Action Plan will ensure that all the diplomatic assets of the Government of Canada are harnessed to support the pursuit of commercial success by Canadian companies and investors in key foreign markets
By sharpening our trade policy tools, putting boots on the ground, and promoting business-to-business links with partners globally ... the approach is designed to keep the plan squarely aligned to the needs of Canadian business."

The new face of Canadian diplomacy ... I wonder if we will be giving out fridge magnets.

They really went with social contracts. Wow. If by some fucked up chance the Cons win this, the CF should quit en masse because the concept of "service" would lose all meaning. They'd effectively be a taxpayer funded mercenary force - a Crown corp situated as competition for Gardaworld. Then maybe they could unionise and get somewhere...sort of, with the penchant for immediate btw legislation.

If by some chance they win, they'll also have undermined the very foundation of the state and thereby any legitimacy they might have as a government. The courts, the civil service, all of it are part the social contract and might as well pack it all in and turn Canada to anarchy.

Yet they will pledge unfailing support for Israel and Ukraine.

What I find amusing is the politicians who stand around saying they need to go to war to protect the citizens "democracy", etc but they never say, oh we will take a couple of hundred thousand of your refugees. They don't care that much about people. They all stand around making noise about Syria but who has all the refugees? Jordon and Turkey. Jordon simply is too small a country to absorb so many new people. Did any of the other countries step up to the plate and say, Hey we'll take a 50 thousand each? No, not one. We spent billions "rebuilding" Iraq and Afghanistan, to no avail. Are we willing to help Jordon to the same degree? Not so much. No they let one small kingdom deal with it all. If the other countries really cared about the people of Syria, they would have been in Jordon and Turkey building new cities for the new citizens.

Oil can is over in the Ukraine making all sorts of noise. Now lets see if the Crimean Tarters will be accepted as refugees should they choose to come to Canada. Na, didn't think so.

Boris :
CBC : Julian Fantino says there is a social contract with veterans

Veterans Affairs Minister Julian
Fantino said Thursday the work done by his department is a social contract with veterans, even though government lawyers have denied any such agreement exists.

In a statement, Fantino said "some have called the work done by Veterans Affairs to be a duty, a responsibility, a commitment, a social contract or a sacred obligation. I believe it is all of those things."

So I hope this is followed up by some real action. Bringing back Stogran would be a start.

I don't know about GardaWorld comp packages and I'm guessing you're joking but I know contractors with other outfits received no pension, disability, etc.
Meanwhile daily wages for mercs have fallen from $600/$700/day in 2010 to sometimes as low as $50 now as the contracting companies hire more and more people with fewer qualifications, and more local start up companies compete.

Owen : Or more correctly - Likkud and Right Sector. These guys make Europe nervous, yet Steve is right at home.
A problem with all diaspora groups it seems - massive mythologizing, fanatical nationalism.

e.a.f. : Really really good point.
But of course, war is a racket.