After CBC reported that the RCMP had seized Bruce Carson's bank records as part of their investigation into his alleged illegal lobbying on behalf of the Energy Policy Institute of Canada, the policy think tank comprised of most of Canada's energy resource extraction corporations promptly went offline.  It's still offline.

This is not the first time poor old EPIC's website has melted away when struck by sunlight, only to reanimate a few days or weeks later with a member or two missing.

EPIC's whole purpose is to formulate a national energy program and get it implemented.

Last night while I was reading their January 2011 report to government, A Strategy For Canada's Global Energy Leadership, [currently missing pages 11-26 and 29 and yes, I have no life], commenter Hugh left a link to their Aug 2012 presser announcing its release.
Energy Policy Institute of Canada: Key Directions for a Canadian Energy Strategy Released    Excerpted, bold mine :

That would be Bill C-38, aka the Environmental Destruction Act, the 400 page omnibus budget bill fast-tracked by the Cons through the House and finance committee, amending or repealing 70 federal laws in a single bill, including gutting environmental legislation and, as EPIC boasts, streamlining the regulatory review process.

As APTN reports, then EPIC president and now Senator Doug Black put it the previous year :


"I would like to acknowledge our three vice chairs that presented our work to the energy ministers: Bruce Carson, Gerry Protti and Daniel Gagnier."

Note : I have to catch a few hours sleep and go to work. In 12 hours or so I'll replace this note with some unpacking of EPIC's success at writing our national energy program with regard to importing workers to the tarsands, building a pipeline through BC,  etc
Update : Scratch that. Got tl/dr, so new post instead - EPIC's epic NEP - Part 2

EPIC is not shy about naming the hurdles confronting their goal of making Canada a global energy superpower. In the meantime till I get back, here's a bit of their past research pointing out a few of them :

1) A comparison of country's share of the total energy R&D investment budgets (in US $ millions) using combined data from 2007 and 2008: 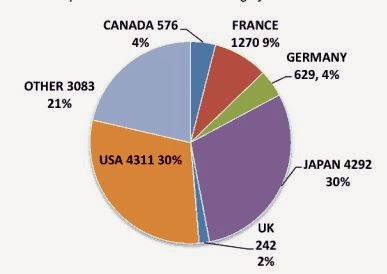 4)Direct employment in the energy industry in Canada in 2008 was approx. 2% of the labour force.

It does not matter where you turn, if Daniel Gagnier is aiding and abetting Justin T the liberals will not be an alternative government, just business as usual.

We need a complete reorganization of politics (here and abroad) no more party politics end the party system like JT did for the libs in the senate. All elected representatives should be independent, represent their constituents only and not a 'party' that can be lobbied.

Its time to end the party in Ottawa on our dime. You can bet independents would not be so quick to adopt policy written by the industry and for the industry and turn it into law. This makes our government of the industry, no matter which party is hosting the saturnalia.

Neither the libs or the ndp have said they would repeal the cons omnibus madness, so the Harper Imperium's dictates will continue to plague us and we will be ruled by big energy industry policies for a long and miserable foreseeable future. Stephen and his cons has proven themselves to be enemies of the people and conspirators for the energy sector.

A House full of independents will be no better. The rich candidates will be the ones that get elected and they will lie their way into Parliament. And it will be less representative of our population mix.
It is clear the the NDP has differing views on economics from the Liberals and the Cons.
I have no idea how an independent MP will represent me better then I am now.

Apologies, Anon@5:42, your comment was stuck in blogger's spam folder.
I have no idea why.

Yesterday from CBC: Liberal campaign co-chair steps down after advising TransCanada on lobbying next government

CBC makes no mention of Liberal campaign co-chair Daniel Gagnier being a vice chair at lobby group EPIC alongside Bruce Carson.
The Liberal Party is blaming Gagnier having to leave their campaign on "the Conservatives and their negative and mean-spirited politics."