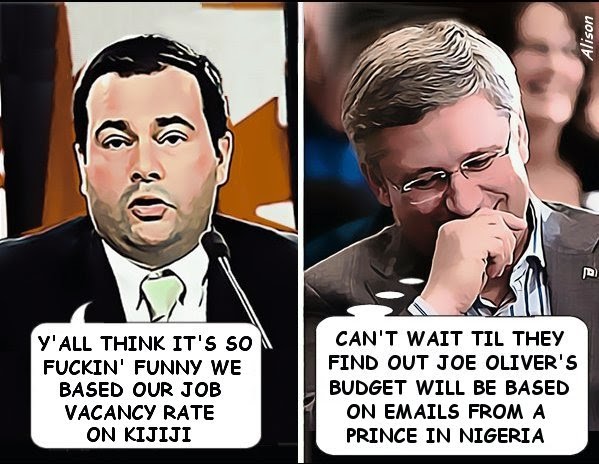 Employment Minister Jason Kenney explained that "none of us know exactly what is going on in the labour market of today" because ... math!!!
The quest was made even more difficult by ignoring StatsCan's official statistics showing a declining job vacancy rate in favour of using data based on hiring "an outside software program that searches for online job ads" and adds them up.

This data showed the "job vacancy rate has been increasing steadily since 2009" - which, as it happens, turns out to be spectacularly useful for bolstering the Cons' corporate-friendly argument in favour of importing temporary foreign workers.

But why did the wonky Kijiji-based data falsely show an increase in labour shortage in Canada?

Chris Harris, Kijiji’s head of Jobs and Housing, provides a clue.
He explained : "the job postings on the site are rising in part because the site itself has had major growth in terms of popularity."

Shorter : The problem wasn’t fake ID in the 2011 election; the problem was fake phone calls. The same Cons who were outraged at the supposed intrusiveness of the gun registry and long form census have spent the last decade scooping up info on Canadians for their CIMS political database -- yet were strangely unfussed about the data breach of CIMS in the last election.
.

It's like measuring the growth of the tourism industry by searching TripAdvisor. They truly are morons.

Either Harper government and its Con goons are ideologically opposed to scientifically gathered data, or they do NOT want factual, exact information in order to blame their incompetence on somebody else.

Imagine the damage the NDP could do if they got their hands on the economy's steering wheel!

Not like those harpercons who are still scared of the internet.

BY : Or economic growth by searching craigslist

deBeauxOs : Or they hunt around for third party data that confirms their desired conclusion. Not remotely accidental.

Thwap : At this rate, very much doubt we will ever find out.

Yes Confuckwittery got you non voters again since you don't involve yourself the government is now using Kijiji to eliminate your voice and your options but since you already sold your rights to the apathetic side of your soul you will make a good slave anyways. Foolish Canadians that are so lame they refuse to look deception in the eye and call it for what it is a lie born out of government abandoning its duties to the citizen and the citizen who gave the government permission by abandoning his/her responsibility to partake in democracy. The void is filled by big corporate greed for power and money and now through apathy you will be subservient to its whim forevermore, good-luck.

Jason Kenney explained that "none of us know exactly what is going on in the labour market of today"...

Kenney 'not knowing' is the direct result of a campaign by Harper to end reliable information sources.

Previous governments were informed because they funded research. This government orchestrates ignorance.

The icing on the cake is Harper/Kenney clawing back millions from the provinces to fund their Job Grant corporate welfare handout plan, in which the ignorant government conspires with self-interested corporations to use tax dollars for whatever the hell they want. By the time this boondoggle in the making is over, we'll have discovered most of the funds were used to "train" foreign workers. Or to offset the fee employers now pay to bring them in. It's just another corporate subsidy, ripe for abuse.

After all, Jason Kenney himself said he wouldn't attach red tape to the Job Grant program so as not to impede corporations using the funds as they see fit.

On a related note:

I was thinking of advertising on Kijiiji for a competent government, Alison. Do you think that would make it into Jason's skills' shortage statistics?