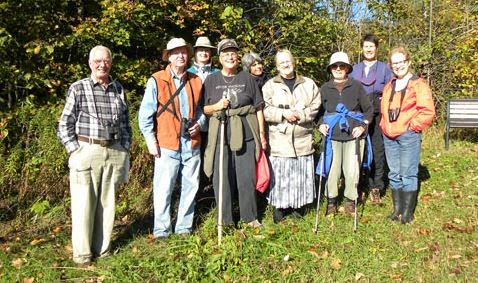 The Canada Con Revenue Agency is bothering birdwatchers now. The Kitchener-Waterloo Field Naturalists pictured at left (membership-300, annual revenues-$16,000) got a stern letter from the CRA just after they sent a letter to two federal cabinet ministers complaining about government-approved neonicotinoid insecticides that damage bee colonies.

CBC : "The stern missive says the group must take appropriate action as necessary "including refraining from undertaking any partisan activities," with the ominous warning that "this letter does not preclude any future audits."

Yesterday Stephen Harper and 100 invited guests attended a Q&A session hosted by another registered conservation charity - the Ontario Federation of Anglers and Hunters (membership over 100,000, snazzy website photo above).
The OFAH, a wonderful group dedicated to the preservation of all things angled and hunted, has boasted Stephen Harper as keynote speaker at their AGMs. Harper was accompanied yesterday by Con MP Robert Sopuck, founder and chair of the Tory Hunting and Angling Caucus. They discussed *conservation*. I'm guessing bees probably didn't come up.

I wonder if the OFAH ever worries about getting any stern letters regarding partisan/political activity from the CRA.

This year the OFAH received in government funding - $360,100 from the DFO, $67,000 from Jason Kenney's Employment and Social Development Canada, and $6,750 from Environment Canada.

Their lobbying activities for the year 2014 include the DFO, Environment Canada, Dept of Justice/Public Safety, and Transport Canada. Issues lobbied about include :
According to their own published list, here's the OFAH's political activities from years past regarding guns and lobbying against gun registries :
Whew, what a list! Good thing this registered conservation charity never mentioned bees.

But maybe it wasn't just the bees that got the Kitchener-Waterloo birders in trouble.

Last year in October, amid their website news about backyard bird counts and butterfly nature walks and how to build a tiny house from scratch and worries about weakening of the Endangered Species Act, one of them wrote a letter pointing out to the rest of the group that a rupture from the nearby Brantford 38- year-old Enbridge pipeline, newly slated to transport "bitumen" through a "line for which it was not designed", "could result in serious environmental problems".

Well there ya go. They mentioned Enbridge and bitumen. Once.

It's ten years old now but here's a very good article, co-authored by Joyce Arthur, pointing out that the 10% rule for charities is ridiculous given that advocacy for their causes is more effective than just providing services. But as she said way back then : why isn't it evenly applied? Why do gun advocacy charities get a break from Canada Revenue Agency that environmental groups don't?

“It seems the rules limiting advocacy are more stringently applied to charities who champion environmental protection than to those so-called charities that represent the hunting lobby.”

Thanks, Alison. You have done your usual excellent job of exposing the corruption and hypocrisy of the regime. Would that more people would realize the egregious and flagrant efforts at suppression of the democratic voice it is guilty of.

I must read it again.. and regard the pics..
The incongruity.. the sheer stupidity
of bureaucracy & political idiocy you reveal
just .. I dunno.. makes me smile ..
Love the pic of the birdwatchers.. priceless !

Note another reference to OFAH as a friendly outlet for Harper:http://www.canada.com/mobile/iphone/story.html?id=10301876

This is the kind of reporting I expect our media to produce, but all we get are pundits making excuses for Steve.

Evidence plain and simple...perhaps our charities need to take Stephen Harper to court for constitutional breaches. Obviously he is not opposed to charities conducting political activity, right?


What Is the Jewish National Fund? The JNF advertises itself as an Israeli forestry, park and land charity. But what is it really? JNF is Involved in Ethnic Cleansing & Colonization. They steal land and illegally build houses on it for Jews only. Guess who's a big supporter of them.... dat's right... HARPER ‼


....................
Canada Park (a.k.a. Ayalon Canada Park), built in cooperation with the Jewish National Fund, now occupies the site of the villages of Imwas, Yalo and Bayt Nuba, which were were completely destroyed in 1967. Their residents are now refugees in the West Bank and Jordan.

Alison, you've nailed it. Unfortunately CRA are now watching your charitable donations. I'd suggest the best way to ensure CRA won't have to call you or anyone at the KW Field Naturalists group is to vote out the harper/reform/alberta alliance/money party come 2015. I'm going to make every effort I can to help that change occur

Jannx : Then may I suggest you do whatever you can to support and spread the word about this.

Anon@1:28: Excellent doc - posted and blogged about it here for Steve's January visit to Israel.

Anon@10:53 : It's up to us, I think, to learn to wade through the stenography and just treat it like what it is - in-house advertising.
OTOH, look at these great promedia stories from the last few days from Postmedia, G&M, Toronto Star respectively:

Maher: Stephen Harper and the ‘merchant of venom’

tjd : Thanks. Also Bruce Cheadle really nails Steve's funder number at OFAH while the G&M just stenos it in.

Lorne, Salamander : You guys are so nice to me ... Hope I didn't embarrass the KW birders.
A point not to be missed here and I didn't stress it enough - re the last link in the post - is that a lot of this guns over environment advocacy permitted by the CRA predates Harper.

Also I'd be interested to know where the hell the OFAH anglers were when Harper was gutting protection for 99% of our inland waters last year?
And do they still try to donate NRA material to school libraries?

When I do a search of the GOC website of federally registered lobbyist will I find The Kitchener-Waterloo Field Naturalists? That same search will show that the OFAH is a registered lobby. I'm also against neonicotinoid insecticides, but I believe the OFAH is operating within the tax laws, KWFN is not.

Don't vilify a group dedicated to conservation for going about things the right way. Leearn how to do it yourselves.

Anon@4:07 : Really? You think a 300-member birdwatchers group should have to register with the government as a lobby group so they can write them a letter about bees or have someone come and speak to their group about the environment?
Where's your sense of proportion?

Half of the political-activity audits in 2012-2013 were conducted on environmental groups who oppose something about government energy/conservation policies. Half.

The CRA says it gets its cases from leads received from the public. Ethical Oil has boasted they have sent them plenty of *leads*.
But do big Harper/tarsands support think tanks like Fraser Institute, C.D. Howe Institute, and the Macdonald-Laurier Institute get audited for their very public political activities? No they do not.

In February Jim Flaherty responded to a question about why the CRA is auditing charities that oppose tarsands pipeline projects by saying "charities are not permitted to accept money from terrorist organizations."
In July the charity Oxfam got a CRA letter telling them "preventing poverty" is not a valid goal for their tax purposes as a charity.

It's advocacy chill, pure and simple.

Your reportage is excellent, Alison, but it eventually enraged me to incoherence---the only antidote for which has been a refreshing swim in the swirling, black&white pool of a certain Eastern philosophy: what exactly is the nature of partisanship? With regard to your sterling research, how is "partisan activity" defined?

While it's OK if it doesn't make sense, it's not OK if it's a basis for punishment.

The report concludes there is evidence of biased scrutiny by CRA; and questions how honest the right-leaning reporting is:

Alison. This is brilliant. Thanks so much.

Have you asked CRA to respond or would you rather not have a visit from the Tax Stasi at 3 a.m.?

Scotty : The swirling black and white pools of most Eastern philosophies would say the nature of partisanship is ego, and there is certainly a strong case to be made aside from those philosophies that push only produces pushback. I like to think that blogs like mine are necessary pushback to Harper push.
According to the working def. at the CRA, "political activities" are “any activity that tries to change, retain, or oppose a law, decision, or policy of any government” - which is frankly ridiculous as any charity not doing that is also not doing its job. "Partisan" activities are plugging for the election or ouster of specific parties or politicians.
"While it's OK if it doesn't make sense, it's not OK if it's a basis for punishment"
Excellent point.


HollyStick : Saw that, working on post expanding on it. Occurs to me that possibly merely checking the *No* box for political activity might be sufficient to preclude a CRA audit if you're a rw think-and-do tank.


Mound : Meanwhile, while Con Minister of National Revenue Kerry Lynne Findlay stands in the House to insist the CRA audits are "an arms length exercise done by professional public service", Harper is telling the OFAH that "his own federal bureaucracy is trying to bring back the long gun registry "through the back door."

Over the years, the OFAH has taken on the government on many different environmental issues. They are far more than just a gun or fishing lobby. My main point is that they are obviously under the microscope too. Otherwise you wouldn't be talking about them.

For whatever reason, it seems that you have no love for a group that is supported by hunters and fishermen. You are not alone in this dislike. It would be surprising to me to find out that OFAH has not been reported to CRA by some of the folks out there that don't like them. This group includes gun owners that feel that OFAH is a sell out organization to other shooting sports that exist in Canada. If they are following the rules, they have nothing to worry about.

As for KWFN, they need to learn to play with in the rules too. If their butts are covered, attention from CRA should not be an issue. I feel that KWFN is right about bees, and should continue to pursue their goals. but they have to operate smartly. It would have been wiser for them to approach a group like Ducks Unlimited or OFAH to share their concerns. These groups understand the importance of bees contributions to the environment. OFAH is a conservation group. They would have most likely have been on your side. I'm a member of OFAH. I'm on your side. OFAH has the resources and the ear of government. They will have the ear of a Trudeau government as well.

I would also like to point out that Ethical oil will have the same ear of a Trudeau Government too if he is elected. Lets not fool ourselves about the fact that Trudeau is just a politician. The Tar sands are not going anywhere under a Trudeau government.

I suspect they justify checking the No box by claiming their activities are educational, not political.