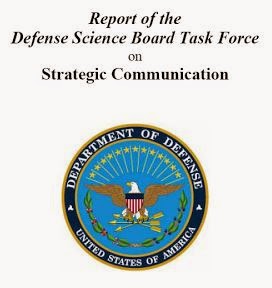 Glenn Greenwald took something of a shit-kicking in Canada in some media quarters last week for his column:
CANADA, AT WAR FOR 13 YEARS, SHOCKED THAT ‘A TERRORIST’ ATTACKED ITS SOLDIERS


Published after two Canadian soldiers were mowed down by car in Quebec on Monday but prior to another being shot at the National War Memorial in Ottawa on Wednesday, the piece was
misconstrued as a justification of terrorism instead of the explanation for it.

At his talk in Ottawa three days ago, Mr Greenwald points out his explanation is based on a ten year old Pentagon report written for then Secretary of Defense Donald Rumsfeld. Transcript :


"There is this remarkable, remarkable 2004 report that was commissioned by the George Bush Pentagon run by Donald Rumsfeld and it was given to the Defense Task Force. And the question that Donald Rumsfeld commissioned that task force to ask was - What is ultimately the cause of terrorism? Why are there so many people in the world that want to do violence to the United States and you can go online and read it.

It seemed as though what I wrote this week or what I said in interviews was somehow controversial.  It isn't - it is self-evident.

The report in 2004 concluded this; this is what it said. It said  :  "The key cause of terrorism aimed at Americans is quote "American direct intervention in the Muslim world."  It then identified three different policies that comprise this direct intervention.

One is support for the region's worst tyrants - giving economic aid and drowning in weapons the regimes in Egypt and Saudi Arabia.

Secondly was steadfast support for Israel which is viewed as enabling all sorts of aggression in that part of the world.

And third was actual wars and occupations, principally the invasion of Afghanistan.

Canada plays a role in all of those policies.

And what the report concluded - and this is not me saying this, this is an actual quote - it repudiated the US government's statements to its own citizenry in the wake of 9/11 about why the 9/11 attack happened, why terrorism happens.This is what it concluded, quote : "Muslims do not quote hate our freedoms unquote but rather they hate our policies."

It is so tempting, so tempting, to see ourselves as victims, as pure and innocent victims.  It is. We all want to see ourselves that way - we get to emancipate ourselves from any kind of responsibility or culpability or guilt. It's really tempting to say when our societies are attacked rather than our societies doing the attacking that the reason it happens is because there's this extremist religion in the world - or an extremist version of a religion - that's just unbearably hateful and irrationally savage and they just want to do violence for its own sake - "they hate us for our freedoms". That just simply isn't the case and I think it is our responsibility as citizens and certainly as journalists to make certain that the dialogue isn't comfortable or flattering. That shouldn't be the goal; the goal should be to make it as rational and fact-based as possible so that we're not actually susceptible to manipulation."

It's appalling - and does not speak well for our various 'freedoms' or our ability to resist being manipulated by our government - that this ten year old Pentagon research report on the causes of terrorism is still considered controversial anywhere in Canada.
.
Posted by Alison at 4:18 am
Email ThisBlogThis!Share to TwitterShare to FacebookShare to Pinterest
Labels: Greenwald, Rumsfeld, terrorism, war on terra

This reporting is so accurate. The analysis and conclusions should be evident to all. Sadly it is not. And we are destined to pay the price.
David Hillstrom.blogspot.com

It was just so embarrassing. We look like propaganda-eating TURNIPS, not sentient individuals.

Every political party, every media outlet, every politician and almost all the public knee-jerk lined up crying, saluting the flag, lauding the military and thanking Our Great Leaders.

Missing from the blog: Then why did Rumsfeld insist on policies that ran exactly contrary to this report? More proof Rumsfeld is no patriot.

Getsmart4 : iirc, Rumsfeld did initially try to change the channel from 'the war on terror' to 'the global strategy against extremism' or something, but apparently lost the meme war to Bush's more usefully vague and strategically all-encompassing buzzconcept.
I'm guessing they all knew it was bullshit even before this Pentagon report.

Cocoabean : Turnips, indeed. Plus the poor bastard who got shot for wearing a uniform while standing guard against skateboarders peeing on a national war monument is not a hero. It's a terrible tragedy he was murdered but guarding against pee is not "heroic".

David Hillstrom : Did you see Kev and Michael Harris?

This is why I don't understand what American and other western countries really hope to achieve in the long-run with their war against ISIS. They may defeat them, but they're just sowing the seeds for future terrorists down the road.

Anon@10:44 : I think they know that but consider a short term strategy worth the blowback risk.
Alternative questions - Why were Canadian tax dollars used last year to broker a $14.8-billion deal to supply Saudi Arabia with military armoured vehicles?
Why did we sell "Chemical or biological toxic agents, riot control agents, radioactive materials, and related equipment, components, materials" to Qatar?