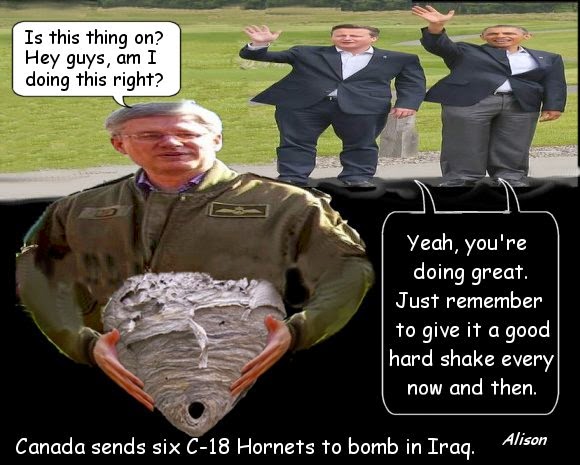 I used to argue that however unattractive their other attributes, and some of these other attributes are exceedingly unattractive, the conservative libertarian right has an important sentry watchdog role to play in our society that benefits the rest of us - their eyes constantly scanning the distant horizon for any sign of the slightest infringement on what it pleases them to call their rights.
Lately I've come to realize that to many of them, those precious rights are just gun rights. They really really like their guns. Guns in a good way, guns in a bad way - doesn't much matter - they get really excited about guns either way.
Liberty minus the guns - not so much. Guns instead of liberty is pretty much ok with them as long as the people taking it away have even bigger guns and don't touch their guns. It's a fetish.

One afternoon on my deck in the sunshine, some neighbours were having a beer and the conversation turned to security vs freedom because we were about to get our first police detachment on the island.
"We don't need police," said one young guy, "if something goes wrong we handle it ourselves. Whoever is best suited to deal with it at the time deals with it."
I nodded.
"Okay," responded another to my nod. "Supposing a really big guy with a really big gun walks into your house and says 'I live here now'  - what are you going to do about it?"
"I'll run out into the street and yell a really big guy has taken over my house," I said.

This is where we are now. Harper walked into our House in the winter of 2005/6 and, with the added twist of assistance from our national police in the middle of an election, he has taken it over. He lives there now and we don't. Somehow we don't run out into the street much over it.

This is also the position the Mideast found itself in after WWI when western powers divided up the Arab world into nation states and installed tyrants beholden to their interests to run them. When people ran out into the streets three decades later to protest it, we crushed them.  We're still doing it and now we're dealing with the blowback..

On Monday, a fucked up Canadian with mental health issues waited around for two hours for his chance to run over two Canadian soldiers with a car, killing Warrant Officer Patrice Vincent.
On Tuesday Canada sent six C-18 Hornets to bomb Iraq.
Yesterday another fucked up Canadian with mental health issues and a long gun shot and killed a Canadian soldier, Corporal Nathan Cirillo, at the war memorial in Ottawa before somehow breaching House security and being shot in turn himself by the sergeant-at-arms. One guy with a gun shot another guy with a gun.
Are these three events in any way related? We don't know yet but ...

Minus the CBC, whose coverage was mostly admirable, a lot of the media predictably played along with ramping up the terror meme to laughable extremes.   [h/t CC for following media shots] 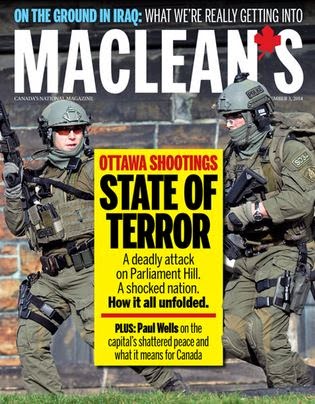 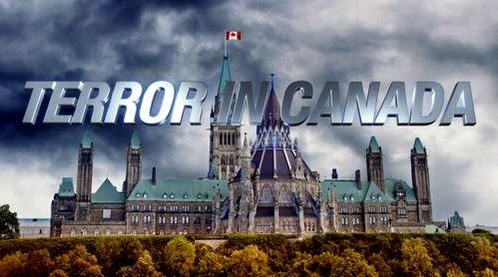 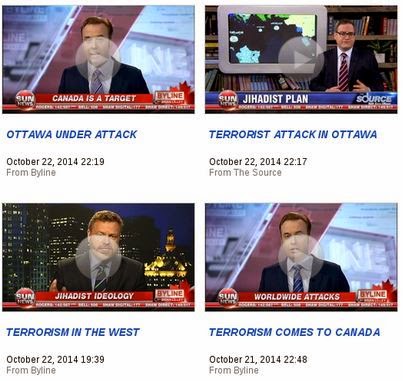 They're happy now because they will be in charge of managing a magical news cycle combining their love of gun stories with assuring Canadians of the absolute necessity of the further clawing back of our civil liberties. Now is never the time ...

Steve is already talking about cracking down on terror threats and a new act with increased police surveillance powers - powers that will undoubtedly be used on Canadians with :


“grievances – real or perceived – revolving around the promotion of various causes such as animal rights, white supremacy, environmentalism and anti-capitalism.”

Or as the RCMP put it in 2010 when they included First Nations in that grouping :


"grievances based upon notions/expectations regarding the environment, animal rights, First nations' resource-based grievances, gender/racial equality, and distribution of wealth etc."

Trapped in a Whirlpool : Now is not the time ...

Disaffected Lib : It's what fascists do.

Politics and its Discontents : Something we should all keep in mind.

Linda McQuaig : Is it too early to ask for a sane conversation about terrorism?
.
Posted by Alison at 2:43 pm
Email ThisBlogThis!Share to TwitterShare to FacebookShare to Pinterest
Labels: cartoon, Iraq, military-industrial-government-media complex, Stephen Harper, war on terra

Neither should we stand for being intimidated by the actions of the guy who took over our House.

Bob : Really interesting interviews on As It Happens tonight. In addition to Glenn Greenwald, they interviewed Rafal Rohozinski of SecDev, "a Canadian expert and practitioner active in the fields of information security, cyber warfare, and the globalization of armed violence."

Surprisingly given his field, he said that given no evidence of perps' links to ISIS and the mental health issues they both had, Canada should be looking at a mental health strategy solution rather than a national security solution.
"Since the de-institutionalization of mental health since the 1960's, we've transferred responsibility for the mentally ill from the social services to the criminal services. I think the most unfortunate lesson we could learn from yesterday's tragic events would be to put the national security apparatus responsible for mental illness as well."

"A source who has gone over intelligence reports on both men said they both came from broken homes, both were adrift in their lives, used drugs and were self-radicalized."

Well, at least some senior intelligence people are "doing sociology" on this. Be lovely if they gave a public briefing on this. It's interesting to consider the link between radicalisation potential and neoliberal governments that restructure the economy with fewer job opportunities at the same time they cutback on social programs.

Time line though gives up the real perps:

Event # 4 same person manages to evade police army or inspection [he had a free pass???] goes into parliament shoots nobody but gets shot fatally by the Sergent at arms while trying to do just what?

Event # 5 Canadians are arguing over the events, Caesar said it right "Divide and Conquer"

There's not the *slightest* thing "libertarian" about this bunch. This is state interventionism, domestic socialism and militarist authoritarianism. Where's the non-aggression principle? Where's the economic laissez-faire? Where's the respect for property rights?

These are statist authoritarians - same as the NDP and the Liberals. Same as the Democrats & GOP. Same as the UK's Tories & Labour. There's not a shred of difference between any of them anymore on the question of CONTROL.


"This is where we are now. Harper walked into our House in the winter of 2005/6 and, with the added twist of assistance from our national police in the middle of an election, he has taken it over. He lives there now and we don't. Somehow we don't run out into the street much over it."

Well then, isn't it about time you started questioning the system itself? The system of big, powerful, socially interventionist national-level government? Respect for militarism? The idea that "government can improve things"?

And...are you committed to the idea that ALL surveillance and spying by government is illicit?

You probably merely think that once we get this party out and replace it with (what? the NDP?) things will magically improve...?

Ha ha ha. Cocoanut, the entire premise of this blog is that the system is fucked. No one thinks the HarperCons are libertarians or even conservatives any more - they're neoliberals at best, as are the other parties.

Yes, it's time to put Lieberals and ConServatives aside and elect an NDP government. Over 100 years of tag teaming Canadians with sleaze,graft, corruption and ideological perversion
is enough! Time to put people first before corporate maleficence.

It's not a fetish. Those who hide in closets when the going gets tough need a big compensation package.

Trouble is the media so completely bought into the terrorist line, they're not going to be able to walk it back now to a story about a security breach that involved a mentally ill crack addict who converted to Islam and wanted a passport to go to Saudi Arabia.

You have hit the nail on the proverbial head! The Corporate Media will continue to parrot the PMO line as they have done since he's been in office.

Boris : "the link between radicalisation potential and neoliberal governments that restructure the economy with fewer job opportunities at the same time they cut back on social programs".
Yes.
Excellent reaction piece from Laura K, including quote from Norway's PM Stoltenberg following the Brevik massacre:
"We are still shocked by what has happened but we will never give up our values. Our response is more democracy, more openness, and more humanity."

Mogs : My criticism of the false flag argument is that Blaney announced renewed powers to CSIS one week before this happened. Harper's majority government means he can easily pass whatever the fuck he likes w/o false flag ops and it's not as if he cares what anyone outside the base thinks. Possible Con caucus was divided on the extent of proposed leg but I highly doubt it.

Cocoabean : The post is admittedly a bit of a ramble from personal bias and anecdote to news but I fail to see how you managed to glean I'm saying the Cons are libertarians out of it. To clarify : They use vaguely libertarian arguments to prop up overtly non-libertarian actions.

Anon@8:33 and Bob : Unbelievable. This morning an RCMP presser is still going on about terrorists.

Here's the thing I don't get...
While I'm sure recent events were absolutely terrifying for those in its proximity and tragic for families of the 4 people killed, this is not a story about heroes and terrorists, it's a story about a security breach.

I agree, the security breach angle needs to be the focus point here, not the tenuous connection to an act of terrorism, or to the middle east, or to IS in any way.
If you looked at Parliament a month ago, or probably even right after 9/11, it was a barely secured perimeter in which any such act of violence could have occurred. Parking cruisers at the entrances and then walking away from them, but leaving tons of parked cars in the inner perimeter is a complete lapse in judgement on the part of the RCMP and the Hill security people.

The entire security response was laggard at best. The least effective response that I noticed was the officer who watched the car go by, got in his cruiser to follow another cruiser around to the other side of the entrance instead of hoofing it to the entrance on foot. It would be reasonable for a security person to conclude that somebody who just stole a ministerial vehicle on the hill, wasn't going to try and try plowing it through the concrete barriers. There's enough security on the hill, it's the manner in which they've deployed their resources which is at fault.

The entire narrative of trying to get at the individuals mindset, background and reasoning is a bit like the Rankian conceit whereas there is a constant pursuit of the truth in history, but there is no such thing as truth in history.

The coverage on CPAC the evening of the shooting was about the only resourceful bit of reporting I would tip my hat to (If I wore hats). The Postmedia gang won't be receiving any of my attention.

"The post is admittedly a bit of a ramble"

I beg to differ. Your calm measured approach to what you describe as a story about a security breach miscast as one about terrorism stands in admirable contrast to almost everything else I've read written about it.