Why are we in Vietnam Iraq/Syria? 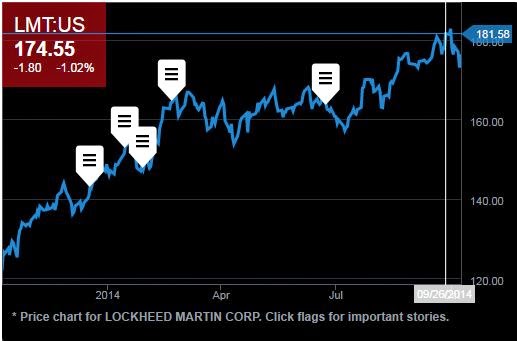 “To the extent we can shift away from relying on troops and rely more heavily on equipment -- that could present an opportunity.” [enthused a chief investment officer who oversees $66 billion including Northrop Grumman Corp. and Boeing Co.]


Investors see rising sales for makers of missiles, drones and other weapons as the U.S. hits Islamic State fighters in Syria and Iraq. The U.S. also is the biggest foreign military supplier to Israel, which waged a 50-day offensive against the Hamas Islamic movement in the Gaza Strip.

Meanwhile, stop me if you've also heard this one before ... From the LA Times, yesterday :

Maj. Curtis J.  Kellogg, a spokesman for the U.S. Central Command, said there was “no evidence” of civilian casualties in Hit."

Patrick Cockburn "Despite what President Obama was saying about this great big coalition of 44 countries, the U.S. has held at arm’s length the people who are actually fighting ISIS, such as the Syrian Kurds and the Syrian army and other groups in Iraq and Syria. And their alliance is with those who are not fighting ISIS and say they don’t intend to, such as Turkey. So, I think that this lack of direct liaison with the people who are fighting on the ground probably makes it much easier for ISIS to withstand these air attacks and for these air attacks to have any accuracy."

The oil and gas barons, profit big time from wars. Harper calling Russia and Putin evil Communists? Harper still exports weapons to Russia. Not only that? Harper has sold Canada to Communist China.

Harper said, he was requested to play a bigger role in the war with ISIS. The US said, they did no such thing. What was Harper going to bomb, rubble into pebbles? It was already said, bombing isn't working.

I believe Mulcair was right. All Harper has done is, endanger Canada for terrorist attacks.

Harper forced his way into this war with ISIS. Harper is a pariah and no-one wants him.

Thanks for this, Alison. The Scahill clip drives home the reality of the Permanent Warfare State (PWS). It's a reality explored by Bacevich in "The New American Militarism" in which he documents today's military-industrial-neoconservative-Christian fundamentalist-for-profit commercial warfighting complex. Perhaps the only real success it has achieved is in recruiting the UK, Australia and Canada into its Foreign Legion.

You are so right, when though are enough Canadians going to wakw up to these grisly facts and say enough stop this nonsense?

When hell freezes over I suppose.

arms dealers need to make a living also. without a war what are they going to do? what are politicians going to do when there are no arms dealers to "donate" to their political funds?