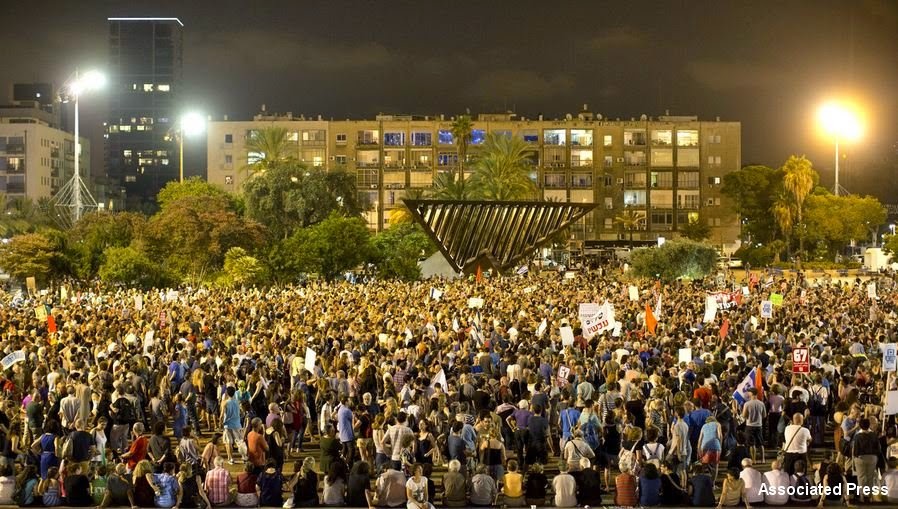 Haaretz :  A Facebook organized peace rally - "Changing direction: toward peace, away from war."

"Following a painful month of war and death, in view of waves of incitement and hatred that are tearing apart Israeli society, we call for a demonstration for peace and democracy. The next round can be avoided. We don’t have to sink into an abyss of ever-crueler wars, of extreme hatred and a destruction of our neighbors and ourselves.

Only an agreement will ensure long-term security and quiet for residents of the south and of the entire country. There is another way – immediate dialogue with Palestinians to ensure a fair peace, the opening of Gaza, and a determined stand of Arabs and Jews against racism and for life. Only a two-state political solution will guarantee independence, justice, security and hope for all people living in this land.”

Thank you. I wept when I saw that.

So what took then so long?

Anon : They couldn't get the necessary permits from the police to hold it. I don't know whether they eventually secured them or if they just went ahead anyway, as reports on this part vary.

Say if any of you hear word one about this in North American pro-media, could you let me know please?

It was suggested? Canada bring the Palestinian children over to Canada so, they could be treated for their horrific war wounds. Harper point blank refused. That makes Harper a monster. And, Harper should be charged for war crimes and crimes against humanity.

Further more? Harper does not speak for all Canadians, he speaks for very few.

"Other countries are calling for, Israel to be charged with, war crimes and crimes against humanity."

such a petition should be torn up, and the charges need to be levelled against Hamas, which is STILL dedicated to killing all Jewish Israelis.

Hamas needs to call of its war, and apologize. If this does not happen, the the only solution is indeed a military one. It worked to stop Germany in WW2 after all.

There's nothing like a courageous stand on behalf of common shared humanity to bring out the haters and warmongers, is there?

I looked through mainstream media in Canada and the US for any mention of this protest. Huffington Post reprints Haaretz and there's also a Reuters article not picked up by any other news agency. A google search brought up for it brought up Creekside. That's it. :(

Thanks, Anon@8:53. I saw people on twitter on Saturday suggesting it might be a hoax so I was hoping it would get some pro-media coverage to counteract the prevailing narrative of one side good, other side bad.