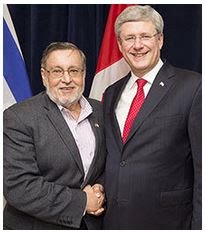 Not content with awarding Stephen Harper their Gold Medallion human rights award and pledging to create a Stephen Harper Centre for Human Rights, B’nai Brith Canada announced yesterday they will be nominating him for the Nobel Peace Prize.

Frank Dimant from their statement :


“Moral clarity has been lost across much of the world, with terror, hatred and antisemitism filling the void,” said Frank Dimant, CEO, B’nai Brith Canada. “Throughout, there has been one leader which has demonstrated international leadership and a clear understanding of the differences between those who would seek to do evil, and their victims."

Yeah, about victims ... one minute of aerial footage of Al-Shejaiya in Gaza

B'nai Brith was a successful advocate of Canada cutting off funding to UNRWA, the United Nations Relief and Works Agency - the only UN human relief agency willing to work in Gaza under fire. (Eight of their workers died in this last incursion). Last month B'nai Brith called for the disbanding of UNRWA altogether. Canada is no longer a donor country to UNRWA.

Back to Frank's presser, where he notes that as a 'professor' he is eligible to make a nomination to the Nobel Foundation :


“In accordance with the rules of the Nobel Foundation it gives me great pleasure to nominate in my capacity as Professor of Modern Israel Studies at Canada Christian College, Prime Minister Stephen Harper for the Nobel Peace Prize in honour of the outstanding moral leadership he has demonstrated.”

Dimant : "We [Jews] and Israel are not alone because of you and the tremendous leadership of Dr. McVety and Dr. Hagee." Dr. Hagee. Go on, click that last link.

Three years ago in this Christian College video at a Stand With Israel rally, Dimant, Jason Kenney (far left), and McVety (behind Dimant) , along with Nathan Jacobson (to the left of Kenney) shared the podium as Dimant courted his presumably mostly Christian audience. He praised Harper and the Cons as friends of Israel and called on God to protect Israel from the United Nations "as we await the messianic times which are just around the corner."

In March 2014, in a more intimate setting in a synagogue, Dimant spoke about his relationship to Harper:


" I happen to know Mr.Harper from the days he was in the opposition and the truth is we were on first name basis because the Jewish community was not in favor of Conservatives  - at that time they were called the Alliance Party and before that the Reform Party.  The Jewish community was traditionally liberals and the Jewish community was very much onside with the Liberal Party of the day.  When Mr. Harper and before him Mr. Stockwell Day wanted to get their message out to our community, all the doors were closed in their face.  It's very difficult to believe when today you see the world's premier friend of Israel - that when he wanted to speak about his attitude towards Israel, that door was shut.


As to the Nobel Peace Prize nomination, I'm blaming Michael Byers.
Six weeks ago in The Harper Plan for unilateral Canadian disarmament , Byers suggested that despite all his tough military world stage talk, Harper might be eligible for one because he has "reduced defence spending to just 1% of GDP — the lowest level in Canadian history".

At least when they awarded the prize to Obama, he hadn't yet proved himself to be a warmonger: Harper has demonstrated all the traits of the classic Chickenhawk.

Harper Centre for Human Rights - egads that is unbelievable.

Maybe Harper will gift B’nai Brith with a prime piece of real estate on Wellington (maybe re-purpose the Supreme Court of Canada since he doesn't have much use for them). He could also create another public-private partnership and have Canadian Heritage pony up 1/3 of the budget.

I'm sure tax payers will just love it, especially with it's being located so near the recently approved public-private funded anti-communism memorial. Plus it would only be a short walk away from the War Museum and the newly named Museum of History.

Jesus, Hitchens was right, religion does poison everything!

Exactly two years ago, Stephen Harper shunned the opportunity to speak at the UN in order to attend and receive a World Statesman award from Henry Kissinger at the Jewish Appeal of Conscience Foundation fundraiser. They called him “a leader of integrity who has earned the respect of his people, for his commitment to democracy, freedom, human rights and peace in the service of humanity.”

This is really just old white guys giving each other plaques and useless pieces of paper as the world slides irrevocably into climate change chaos.

Alfred Nobel invented a more effective way to blow shit up. Israelis have proven themselves past masters at this, so an enabler like Harper should fit the profile perfectly. If I were a dove or an olive branch, I would be worried.

Canada’s Prime Minister Stephen Harper’s Neoconservatism: This entire “hard right” movement is a crock. It is not a religious evangelist movement, OR a Christian moral movement, nor a Zionist movement.

It is a corporate movement.

Anon@8:11 : In the 21C, a "hard right" movement is a corporate movement by both definition and consequence. In that context, religious movements, like war, are merely a device to extend control while ensuring national social cohesiveness.

No, I've never thought Harper has any particular religious agenda in his politics, having both learned from and out-maneouvered Manning and Stockwell Day's mis-steps, and yet ...
Did you watch footage of him and Bibi touring around in Israel? He was positively gaga. He had the body language of a teenager in love. It's the most open and happy and positive I've ever seen him.

Thanks for the link to Emily Dee's epiphany about Leo Strauss, which I hadn't read in some years.
Harper's own epiphany, and hence the subject of his degree, was reading another free marketeer, Friedrich Hayek. Arguable whether either Hayek or Strauss could have predicted or approved of the current extent of corporate rule.

The difference in left/right reactions to hearing the phrase "noble lie" is that lefties hear "lie" while Straussians hear "noble". I would only disagree with Emily re their being secretive about it; they are not in the least bit secretive about it, being of the opinion that we the governed don't much care one way or the other. That is in fact their justification for exercising it - that we can't tell the difference and are either incapable of or uninterested in learning how to govern ourselves.

With apologies to any real Strauss or Hayek scholars out there who might stumble across this. I offer in my defence that I know a couple of people who studied under Strauss and went on to teach his political theories, and this is what I've gleaned from listening to them.

Vid ~~> I strung 2gether all of Harper’s most awkward moments arriving to meet Bibi in Israel http://youtu.be/yZxL1vsd4Q0 #cdnpoli 2min #waddle