"Cutting the grass" in Gaza 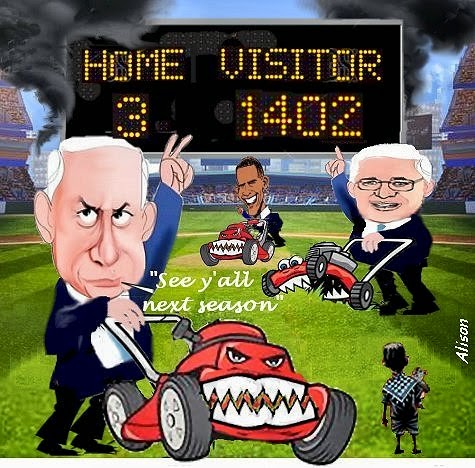 Updated : Total number of declared civilian casualties via United Nations Office for the Coordination of Humanitarian Affairs (OCHA), as of Aug 10, 2014

With one quarter of the total population of Gaza now *displaced*, Harper, Mulcair, and Trudeau continue to "Stand with Israel", insisting on the right of Israel to defend itself against the people they are illegally occupying.

Were the Jewish children with tattoos on their arms, merely collateral damage too? Will the people of Palestine, be forced into ghettos?

Israel and Harper have to be tried for, war crimes and crimes against humanity. They are just as bad as Hitler.

Luis Moreno-Ocampo was Chief Prosecutor for ICC. He was deciding if Harper should be tried for war crimes and crimes against humanity. Harper had bombed Libya with no declaration of war. Libya did not declare war on Canada. Harper bombed Libya and killed many innocent people and their children.

Make no mistake. Harper is one evil s.o.b.

All Israel all the time, eh Alison?
Working for Hamas now?

Human rights have become disposable to our political class particularly if they become inconvenient to their quest for the holy grail...Power