Back here in comments, e.a.f. noted I was singling out Israel for its promotion of occupied Gaza as a lab/marketing display tool for selling its population control armaments abroad - when USA arms manufacturers also benefit.

As Marc Whittingham, CEO of the Canadian Commercial Corporation, the crown corporation that acts as Canada's global military sales agency and "a foreign policy instrument for the government of Canada", once put it :


"There is no better trade show for defence equipment than a military mission."


"Report on Exports of Military Goods from Canada", as per international.gc.ca :

The figures from this Feb 4 2014 report cover nothing more recent, as our government has not seen fit to provide the Canadian public with more up-to-date figures. 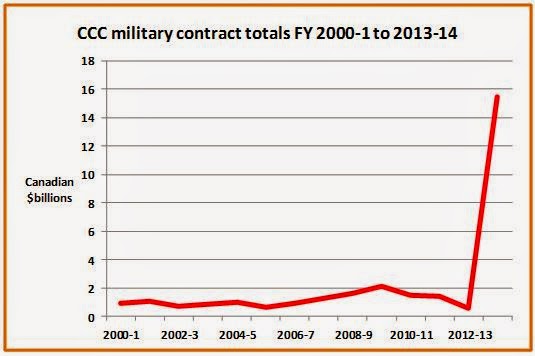 According to Project Ploughshares :


"For the first time in more than half-a-century of CCC operations, Saudi Arabia has displaced the United States as the largest year-on-year recipient of CCC-brokered military export contracts."

Canada, of course, has declined to sign the UN Arms Trade Treaty.
.
Posted by Alison at 11:46 am
Email ThisBlogThis!Share to TwitterShare to FacebookShare to Pinterest
Labels: arms dealers, Canadian Commercial Corporation, war is a racket

When it comes to Harper, greed always trumps honor because, Harper has no decency, honor, ethics nor morals, what-so-ever.

I find a lot of humor in, Harper ripping into Putin and his annexing of Crimea. Harper says nothing what-so-ever regarding Communist China doing the exact same thing. China is menacing other countries around the globe.

Harper will stoop to the lowest level, to grab money. I'm not surprised in the least, Harper sells arms to Russia. Harper is Canada's low life hypocrite, for this century.

Canada does have a special relationship with Colombia, as in exploiting it (Liberals and Conservatives):

Indeed. I would add that although Engler points out the Cons led the fight against passing the Liberal Bill C-300 to encourage some semblance of corporate responsibility from mining companies registered in Canada, they couldn't have succeeded without the help of 13 Libs.
Barrick Gold hired former Liberal cabinet minister Don Boudria, by then a lobbyist with Hill and Knowlton, to target 15 Libs "multiple times" for two weeks. In the end, 13 of them obligingly skipped the final vote: Michael Ignatieff, Scott Brison, Ujjal Dosanjh, John McCallum, Geoff Regan, Scott Andrews, Sukh Dhaliwal, Ruby Dhalla, Martha Hall Findlay, Jim Karygiannis, Gerard Kennedy, Keith Martin, and Anthony Rota.