From Ferguson and Gaza to the Toronto G-20 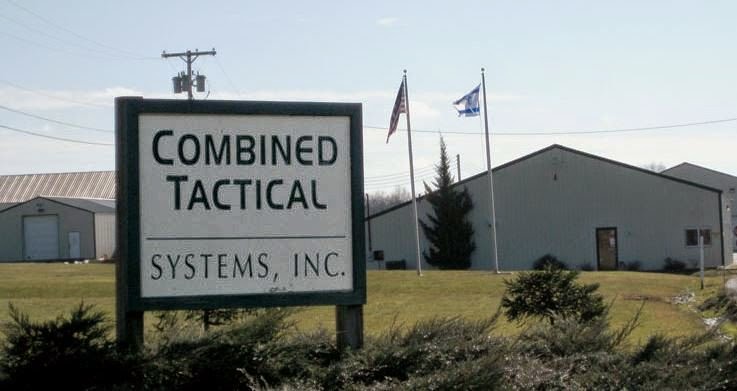 This photo of its Jamestown, Pennsylvania headquarters raised a few eyebrows this week because :

1) as you can see in the photo, CSI was flying an Israeli flag alongside the US one up until January 2012 and, according to a former CSI plant employee in the first comment here, it is flown whenever the Israeli owner/founder is in town, and

2) CTS tear gas shell cartridges manufactured there were found a week apart in Gaza and Ferguson, Missouri - where protests and excessive police reaction fuelled by the half a billion dollars in military weapons given to local police forces erupted in response to the August 9 shooting death of unarmed black teenager Michael Brown by a local police officer.
Comparisons of the highly militarized assault on their respective populations, supportive tweets from citizens in Gaza to citizens in Ferguson about dealing with the effects of teargas, and a look at the fact Ferguson and St. Louis County police forces were trained in Israel in recent years followed.

Along with 9,500 other law enforcement officials who have attended Israeli-led LEEP training sessions in the US and Israel.


"in cooperation with the Israel National Police, the Israel Ministry of Internal Security, and the Israel Security Agency (Shin Bet) to support and strengthen American law enforcement counter terrorism practices"

- was the brainchild of former FBI Assistant Director and Chief of Counter-Terrorism Steve Pomerantz, in his capacity as Director for Counter-Terrorism Programs for The Jewish Institute for National Security Affairs (JINSA).
JINSA was founded to "advocate on behalf of a strong U.S. military, a robust national security policy, and a strong U.S. security relationship with Israel" to "provide leadership and affect policy on crucial issues of national security and foreign policy."

"In early September 2012, the New Police Department (NYPD) opened an Israeli branch at the Sharon District Police Headquarters" in Israel because "the Israeli police is one of the major police forces with which it must maintain close work relations and daily contact."

Really? The NYPD requires daily contact with Israeli police from a location inside Israel?

Naturally, there have also been Canadian security junkets to Israel. In 2005, on his first day as Ontario emergency management commissioner, Julian Fantino, Toronto Police Staff Supt. Bill Blair, and 30 more Ontario police officials left for Israel to "study security and anti-terrorism measures", courtesy of the Canadian Jewish Congress, the Ontario Association of Chiefs of Police, airline El Al and the Israeli government.

But back to Combined Tactical Systems (CSI). In addition to making the teargas cannisters used against populations in Gaza, Ferguson, Tahrir Square in Egypt, Bahrain, Occupy Wall Street, and Toronto's G-20 in 2010, they also run their own training sessions "combining product tools with knowledge and techniques."

Then read this account of Why there wasn't accountability for the police in Ferguson and see if it doesn't remind you of the same police set up used to defy accountability at G-20, involving the aforementioned Fantino and Blair.

In January 2011, Canada and Israel signed an umbrella pact for defense and military cooperation and bolstered that agreement in November 2011 amid the turmoil that had been set upon the Middle East and around the Arab World during the Arab Spring. Canadian Defense Minister Peter MacKay and Israeli Defense Minister Ehud Barak settled a number of memoranda of understanding to facilitate information and intelligence sharing as well as cooperative arrangements for the development and sale of military technologies.


From Ferguson and the occupation of Gaza to the Toronto G-20, war is a racket that always comes home .

Amazing connection of dots, Alison. It's no wonder that the behaviour of Canadian policing entities have become so brutal in the last decade or more. Training in anti-terrorism techniques in order to keep our streets safe and peaceful is overkill (pun intended). Just count the number of fatalities under questionable police actions during the same time period and you definitely see a systemic change in policing techniques and attitudes.

As for this cast of neocon thugs, Dick Cheney, Richard Perle, John Bolton, Douglas Feith, James Woolsey, and Michael Ledeen, aren't a number or them if not all signatories of the Project for a New American Century (PNAC) blueprint for policing the globe?

Original PNAC Statement of Principles signatories or later WINEP boosters, yes, and I should have included PNAC-ers Paul Wolfowitz and Zalmay Khalilzad on the JINSA list as well. And they all fell for Chalabi who promised oil from Iraq to Israel if they made him PM. They hated the Oslo Accord and supported the interests of Likud over the interests of Israel, even nurturing the rapture goy in the US into the political force it is today to further these objectives.

Harper is merely the Canadian manifestation ...

Once again, M'Lady you're just like Kojak: "On the case."

The racket is also baffling because it's focus is entirely tactical. It's tactical equipment and training, because these are the goods and services that are marketable.

Strategic considerations, like how best to resolve a problem or deal with a protest - without - resorting to all that hardware and stuff the cops learned on the training course don't enter the picture. You can't sell strategy by the seacan, and besides, such a thing requires one to pay close attention to context. Nope, best just to work on new or improved ways to kettle, cajole, infiltrate, incapacitate, snatch, SWAT, and mass arrest.

Boris : Yeah, big equipment insulates cops from a situation's context. Also militarizing the police is a bad idea because while the military are trained to fight an enemy, police depend on the support of the public they are members of. When police are militarized to the point of seeing the public they are supposed to serve as their collective enemy instead of individuals, they become droogs and you get stupid shit like this.

Which reminded me of these two events.

There's no easy solution. Demilitarising the police would take a generation because it requires a culture change and from the ground up rethink of policing. The backlash would be massive.