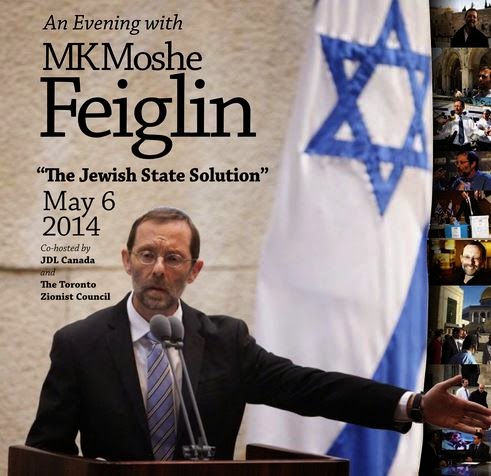 West Bank settler Moshe Feiglin is a deputy speaker in Israel's Knesset and head of the largest faction within Netanyahu's Likud party. Today, actually, he is acting speaker.

Three months ago on May 6, Feiglin was in Toronto for a speaking event put on by the Jewish Defence League (JDL) and the Toronto Zionist Council :
An Evening with MK Moshe Feiglin : "The Jewish State Solution".

Feiglin doesn't use the word Palestine as he contends Palestine does not exist.

Shorter Feiglin : revoke the Oslo Accords, conquer Gaza, expel as many Arabs as possible, repopulate the area with Jews from other nations.

On July 15, 2014, the day Netanyahu made him a member of Foreign Affairs and Defense Committee, Feiglin published the following :

"My Outline for a Solution in Gaza - Moshe Feiglin

Ultimatum – One warning from the Prime Minister of Israel to the enemy population, in which he announces that Israel is about to attack military targets in their area and urges those who are not involved and do not wish to be harmed to leave immediately. Sinai is not far from Gaza and they can leave. This will be the limit of Israel’s humanitarian efforts. Hamas may unconditionally surrender and prevent the attack.

Attack – Attack the entire ‘target bank’ throughout Gaza with the IDF’s maximum force (and not a tiny fraction of it) with all the conventional means at its disposal. All the military and infrastructural targets will be attacked with no consideration for ‘human shields’ or ‘environmental damage’. It is enough that we are hitting exact targets and that we gave them advance warning.

Siege – Parallel to the above, a total siege on Gaza. Nothing will enter the area. Israel, however, will allow exit from Gaza. (Civilians may go to Sinai, fighters may surrender to IDF forces).

Defense – Any place from which Israel or Israel’s forces were attacked will be immediately attacked with full force and no consideration for ‘human shields’ or ‘environmental damage’.

Conquer – After the IDF completes the "softening" of the targets with its fire-power, the IDF will conquer the entire Gaza, using all the means necessary to minimize any harm to our soldiers, with no other considerations.

Elimination- The GSS and IDF will thoroughly eliminate all armed enemies from Gaza. The enemy population that is innocent of wrong-doing and separated itself from the armed terrorists will be treated in accordance with international law and will be allowed to leave. Israel will generously aid those who wish to leave.

Sovereignty – Gaza is part of our Land and we will remain there forever. Liberation of parts of our land forever is the only thing that justifies endangering our soldiers in battle to capture land. Subsequent to the elimination of terror from Gaza, it will become part of sovereign Israel and will be populated by Jews. This will also serve to ease the housing crisis in Israel. The coastal train line will be extended, as soon as possible, to reach the entire length of Gaza.
According to polls, most of the Arabs in Gaza wish to leave. Those who were not involved in anti-Israel activity will be offered a generous international emigration package. Those who choose to remain will receive permanent resident status. After a number of years of living in Israel and becoming accustomed to it, contingent on appropriate legislation in the Knesset and the authorization of the Minister of Interior, those who personally accept upon themselves Israel’s rule, substance and way of life of the Jewish State in its Land, will be offered Israeli citizenship."

No longer differentiating between Hamas and Gazans, on July 23, 2014, Feiglin wrote :


"The residents of Gaza were not occupied by the Hamas; they voted for the terror organization in democratic elections, by a huge majority, by virtue of its uncompromising struggle against Israel.

For this reason, the separation between the armed Hamas terrorists and those ‘not involved’ or ‘innocents’ is false. The Gazans are now paying for the choices they have made."

Feiglin was banned from entering the UK in 2008, but has made regular JDL-sponsored speaking trips to Canada. In November 2012, JDL Canada and JDL UK visited Feiglin in Israel.

This week, CBC and CTV reported the JDL will be opening branches in Calgary and Montreal and then Ottawa and Vancouver, but mentioned nothing of its past history.
The Natty Post did rather better :


"The JDL is not without controversy itself.

In its 2000-01 report on terrorism, the Federal Bureau of Investigation described the group’s U.S. wing as a “violent extremist Jewish organization.” Members have been linked to numerous violent acts in the U.S. and Israel since the JDL was founded in 1968. In 2001, its leader was arrested and charged for a plot to bomb a mosque and the office of an Arab-American congressman.

JDL Canada is not considered a terrorist organization."

“Julius knows some people in the Conservative party, and he sent a letter to the prime minister and it was passed around and somebody in the party extended an invitation to him."

Sounds to me, Alison, that Stephen Harper is soft on terrorism.

These are the nazis that harper sees fit to associate with.

harper is the slime-ball that those nazis see fit to associate with.

To hell with all of that scum.

"For this reason, the separation between the armed Hamas terrorists and those ‘not involved’ or ‘innocents’ is false. The Gazans are now paying for the choices they have made."

I heard the same point made by muslims after the 911 attacks and I disagreed with them then. But surely the same argument could be made to excuse the launch of rockets into Israel by Hamas.
Such logic is not only dangerous and counterproductive but consigns us to a world where the death of civilians will always be justifiable. If it's not the religious killing you to save you in the long run, it's the extreme political types killing you because you took part in an election and they didn't like the outcome.
Some people appear to just want to watch the world burn.

If you took assholes like Feiglin and stuck them on some Pacific island, South American jungle, somewhere for a few years, or forced them to live in a refugee camp, or science lab, hippie colony, or somewhere, anywhere where their little bitty worldviews have no purchase, they'd come out different people at the end.

I've just deleted a bunch of anonymous incoming and already posted comments because Harper is not Hitler, the Jewish peoples are not Nazis, and Israel is not a fascist state.
I get that you're very very angry, outraged, that the things we've seen recently are horrors beyond imagining. But words still have meanings - please try to respect that.

Well, there is the Oslo loophole.

"Under Oslo, Israel was to give back land in three phases. However, there was a loophole: if there were settlements or military bases, that land didn't have to be given back. So the question is, who defines what is a settlement or military site?"

A bit more on the JDL in Montreal Story: http://www.blogwrath.com/freedom-of-speech/the-montreal-police-allegedly-forces-a-blogger-to-remove-a-jdl-canada-related-post/6366/

JDL Canada spokesman Meir Weinstein bragged of the group's success at getting the Canadian government to keep George Galloway out of Canada in 2009. He then went on to criticize the church groups that had invited Galloway:

"We will be looking into these organizations in Canada that have invited him, their links to terror groups as well. We will see to it that the Canadian government will be monitoring every individual and organization that has anything to do with it."

Anon : That incident was perhaps the first time any of us had heard the name Alykhan Velshi, then working for Jason Kenney and later heading up Ethical Oil.

Big City Lib : And yet other bloggers of similar persuasion posted the innocuous content in question, presumably without attracting the attention of the Montreal police.
Hmmm.
btw I had never even heard of Mr and Mrs BCF et al till I started reading your blog years ago.

Boris : You're so smart.

Harebell : It's just an argument to justify the war crime of collective punishment, isn't it?