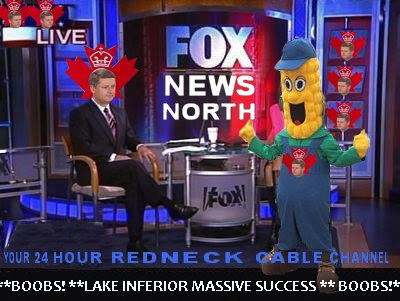 .
Corncob Kory Teneycke, a founding member of the Reform Party, ethanol lobbyist, and Steve's former communications director, has been busy rustling up a 24-hour rightwing cable news channel for Canada modelled on Fox News. It is contingent on whether Quebecor Media are successful in nabbing that all-important "basic cable" licence vital to beaming more US celebrity mudwrestling straight into your livingroom.
.
So far, the previous comedy stylings of Mr. Teneycke, the brains behind Oily the Splot! , have already won over David Akin, formerly of Canwest/CTV, to be its first TV host.

Earlier this year David Akin amused us all with his personal choice of questions for Steve at the year end interview. Proroguing Parliament? The Aghan detainee issue? Nope. Here was David Akins' final question to Steve as delivered by the National Post:

"Do (you) see yourself in a decade -- you may not be prime minister -- do you see a career for yourself after this? I don't sense you're the board of directors type but I don't know, maybe you are -- an academic? What do you want to do? Where are you in a decade?"

Practically serves as a Fox News North job interview all by itself, wot?

Glad I could help. Akin's involvement doesn't surprise me a bit.

Looks like what I have envisioned....LOL. Too bad on the lake inferior poll. Ah well.