Protesters amuse themselves playing with the sirens and lights in two police cruisers inexplicably driven into the crowd and then abandoned in the middle of the street. Calling in to dispatch, making aeroplane noises on the mike for the crowd, and handing out tickets - it's all rather jovial.

Kid lights a paper fire on the passenger seat, someone else puts it out, and a short altercation about safety ensues. Another guy writes on the cruiser in green paint : "This is bait, aka a prop."

Kid on the mike in the cruiser : "For $1.2 billion dollars, thanks for all your photography. This will be on the news tonight justifying the whole event."

And later when the cars were torched for real it was. But some in the media remember the agents provocateurs at the SPP protest at Montebello.

Many Canadians have become suspicious of police tactics since the Quebec police force admitted that it had disguised three of its own officers as rock-wielding anarchists in an attempt to provoke violence at a peaceful protest in the town of Montebello two years ago. Somewhat farcically, the three were exposed as agents provocateurs when they were found to be wearing official issue police boots identical to those of the uniformed officers "arresting" them.

"There are concerns that similar skulduggery may have played a part in Toronto this weekend, where the burning of three police cars quickly became the defining image of Saturday's otherwise peaceful demonstration. Questions are being asked as to why the police chose to drive the vehicles into the middle of a group of protesters and then abandon them, and why there was no attempt to put out the flames until the nation's media had been given time to record the scenes for broadcast around the world."

Indeed. The other three parts to this event are in the embedded related videos. Click on the title 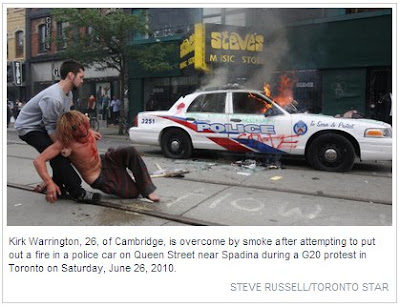 There's a difference between the SPP protest and this one--the protestors there 'called out' the provocateurs--nothing damaged and the idiocy of the police force exposed.
Therein lies all the difference in the world...
It doesn't matter the intent that the cops had in leaving the two cars there.
It's what the protestors did to those cars that's the issue--no fires, no media attention on it.
Furthermore, the cops didn't 'park' the shops and stores that were vandalized along this little riot's route--these people were looking to do damage.
This is my only point of contention here, but now I don't really care about it because it pales with what the cops actually did on Sunday--as you noted in your post below.
That's the big story we can take away from all this--not the damages store fronts or burned cars...
Being held for no reason at all in the rain for 4 hours and arbitrarily incarcerated... Now there's the ball game...

Some more on one of the bait cars from Dammit Janet:
"Toronto is divided into police divisions -- all two-digit numbers, the lowest number is 11, the highest is 55. Cop cars are numbered with four digits, the first two being the division, the second two, I assume, the number of that vehicle.

Note number on bouncy-car -- 766 -- which, by the way, is the car that got torched on Queen West and featured in all those riveting photos and news clips.

As they say, it would be irresponsible not to speculate. Is this a real, regular, everyday type cop car? Or some kinda special cop car?"

Also fyi - there is a first hand account of the arrest and detention of one the CAPP members on a discussion thread at link below. He/she was arrested along with several hundred other peaceful protesters including 2 reporters (1 from the National Post and 1 independent)and was held at the detention center for just under 24 hours before being released without charge. He is calling it the G20 torture center. http://tiny.cc/ibkm9

McJ, you can hear guys in this vid saying this isn't a division car either.
PS your link is not found.

An inquiry should look into who was behind the wheels of those cars when they were driven there and abandoned. The police can hardly say they didn't know where one of their cars was or who was driving it. And it will be very interesting to find out what the excuse for abandoning the car was.

Um, Sparky, how do we know that it wasn't an undercover cop who set the cars on fire? Stranger things have happened.

There were no police on Yonge St for over two hours.
Their strategy was to leave the northern downtown wide open to draw the vandals up there. That way the precious fence was protected and the subsequent trashing downtown justifies the $1billion spent not protecting businesses. This gave them a blank cheque to arrest peaceful demonstrators. The orders were obviously not to arrest black bloc.
From their point of view it was a smart strategy.

Hey folks, there's more and more evidence suggesting that some black bloc members were undercover coppers. See this piece at Global Research and this vid at YouTube.

Black bloccers and cops always have decent footwear because they have a job to do. Vandals and looters wear whatever. Burrows article is absolute nonsense.