If it was my home / Hands Across the Sand

.
Go to your beach on June 26 at noon. Join hands. That's it.
NO to Offshore Oil Drilling, YES to Clean Energy

Hands Across the Sand began in Florida in February to "protest the efforts by the Florida Legislature and the US Congress to lift the ban on oil drilling in the near and off shores of Florida."
Well it's a global movement now and here's the Vancouver Canada page.

But don't we already have a ban on tanker traffic and offshore drilling in BC?
Nope.
.
Natural Resources Canada - Review of the Federal Moratorium on Oil and Gas Activities Offshore British Columbia
ERRATA :

The Terms of Reference for the “Report of the Public Review on the Government of Canada Moratorium on Oil and Gas Activities in the Queen Charlotte Region of British Columbia” state that “in 1972, the Government of Canada imposed a moratorium on crude oil tanker traffic through the Dixon Entrance, Hecate Strait, and Queen Charlotte Sound due to concerns over the potential environmental impacts.” However; the moratorium on oil and gas activities offshore British Columbia does not apply to tanker traffic.

Prior to 1972, a number of permits for oil and gas exploration were issued for offshore British Columbia. Due to environmental concerns, rights under those permits were suspended as of 1972 by way of Orders in Council, thus forming a de facto moratorium.

Thank you, Pierre Trudeau, for suspending those offshore oil and gas exploration permits in 1972.
However in 1982 the Canadian government brought in the Canada Oil and Gas Act which allows the permits to be "renegotiated into exploration agreements" and "the time frame for renegotiation to be extended and the rights continued to be valid."
In 1987, the Canada Petroleum Resources Act grandfathered the waiting exploration agreements.

"Thus, the moratorium continues to be maintained through government policy. No
activity can occur until the former permits are converted to exploration licences. The decision not to negotiate with industry to convert those permits is a pure policy decision. There is no statutory impediment to carrying out those negotiations."

Shorter Con : No actual laws against oil tankers or offshore drilling in BC
.
The above "Errata", by the way, were added to the Natural Resources Canada webpage just last year. 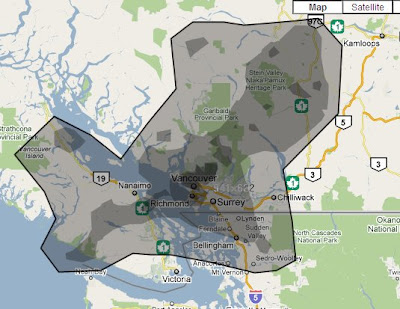 .
If it was my home uses Google Maps and the current situation of the Gulf oil spill to show what the extent of the disaster would look like overlaid on your neck of the woods. Click and it will find you.
.
The Exxon Valdez spill of 1989 was 41 million litres of oil. It can still be found under the sand.
US government scientists are now pegging the Gulf Oil disaster at an Exxon Valdez-size spill every 5 to 13 days, with more oil gushing into the sea in an hour than officials originally said was spilling in an entire day.
.
If it was my home ...
h/t Galloping Beaver co-blogger West End Bob for the Hands Across the Sand links.
.
Posted by Alison at 5:19 am
Email ThisBlogThis!Share to TwitterShare to FacebookShare to Pinterest
Labels: BP, Exxon Valdez, Gulf oil spill, Hands Across the Sand, If it was my home, Natural Resources, offshore drilling, oil bidness