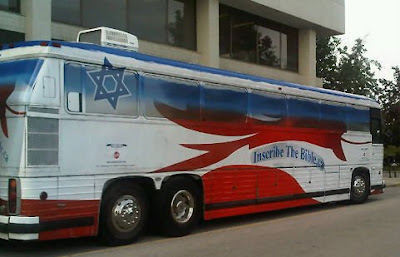 Kady snagged this pic of the Inscribe the Bible bus parked outside Charles McVety's Canada Christian College at Karl Rove's speech for the G20 Faith and Business session on Friday.

Inscribe the Bible Canada is sponsored by B'nai Brith Canada and Texas millionaire televangelist Pastor John Hagee's Christians United For Israel. John Hagee Ministries rents office space from McVety for his Canadian operations at Canada Christian College, and McVety in turn is chair of CUFI Canada. B'nai Brith VP Frank Dimant chairs a department on Israel at McVety's college, where his appointment was attended by Jason Kenney. McVety, Hagee, and Dimant have all shared the podium at CUFI bunfests. End times are cozy times.

Anyway back to that bus and Inscribe the Bible.ca. According to the Israel Ministry of Foreign Affairs, who originally launched the project :

"People of the World Inscribe the Bible" is a project in which anyone can inscribe a verse from the Bible in his native tongue and in his own handwriting.

The project was launched recently in Ottawa, Canada. [December 16, 2008] A day prior to the launching ceremony, Prime Minister of Canada, Mr. Harper, inscribed the first verse."

Naturally there is a Canadian website with a bold if confusing graphic at the top :

Inscribe The Bilble informs us that all these hand-written bibles from all over the world will eventually be housed in the House of the Bible in the Bible Valley in Israel, where a full scale replica of biblical times with re-enactments of biblical stories and life 2000+ years ago is planned for a 15 mile valley.

"The Bible and Peace House will be the jewel in the crown of Bible Valley. The Bible Valley Project intends to develop an area of 25,000 acres adjacent to Jerusalem.

The Bible Valley Project will be composed of several sub-projects. Foremost will be the handwriting of 100 copies of the Bible in various languages by two million Bible lovers from around the world. This will be done in cooperation with the Israel Ministry of Foreign Affairs.

Bring Israeli society back to the Bible? Develop 25,000 acres adjacent to Jerusalem to look like biblical times? Rapture outreach tourism? Take it away, Max ...

Just into the last chapter of "The Armageddon Factor," Alison.

Yikes, my dear, yikes! These people have deeply ingrained themselves into the Canadian gov't with very little opposition.*

The longer stevie and his ilk have the reins of power, the worse this situation becomes.


*Not unlike Parliament in that regard.

We were told 'Biblical Literalists' and such were a tool of the neocons. Look up Dominionism for a 'heads up' : that's Palin's fan club. Remember Jonestown ? The CIA has subverted Christian groups for years - making them Satanist by the simple expedient of including the Old Testament as literal truth. The Sanhedrin lives ! Quite a trick, making Pharisees by turning a morality play against Theocracy against itself.
There's precedent. Nazis used 'Christianity' as a propaganda tool.