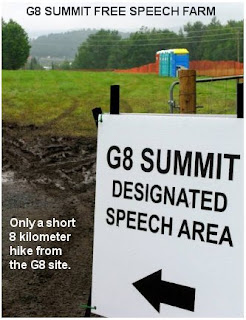 The G8 Free Speech Farm - only a short leisurely 8 kilometer hike from the G8 site.
.
Meanwhile at the G20 downtown, the government of Ontario has designated the sidewalks and public spaces five meters from the security fence a Charter-free zone.
How's your legalese?

A guard or peace officer,

(a) may require any person entering or attempting to enter any public work or any approach thereto to furnish his or her name and address, to identify himself or herself and to state the purpose for which he or she desires to enter the public work, in writing or otherwise;

(c) may refuse permission to any person to enter a public work and use such force as is necessary to prevent any such person from so entering.

Every person who neglects or refuses to comply with a request or direction made under this Act by a guard or peace officer, and every person found upon a public work or any approach thereto without lawful authority, the proof whereof lies on him or her, is guilty of an offence and on conviction is liable to a fine of not more than $500 or to imprisonment for a term of not more than two months, or to both.

OK, help me out with (b) here.
If you're a passenger in a car more than 5 meters from a "Public Work" fence but the driver is suspected of having previously driven inside that 5 meter perimeter, you have a choice of two months in jail or being searched by a "guard" for the crime of being in a public place. Is that right?
Is. That. Right?
.
Saturday Update : Well, here's the answer from Walkom

"But once the erosion of rights starts, it’s hard to stop. On Friday, Toronto police were stopping and searching people entering Allan Gardens, a public park about three kilometres from the fenced off-zone where the G20 leaders are due to arrive Saturday."

.
Posted by Alison at 9:34 am
Email ThisBlogThis!Share to TwitterShare to FacebookShare to Pinterest
Labels: civil liberties, G20, G8

Ultimately legal or not, it does show just how easily a government can create wiggle room.