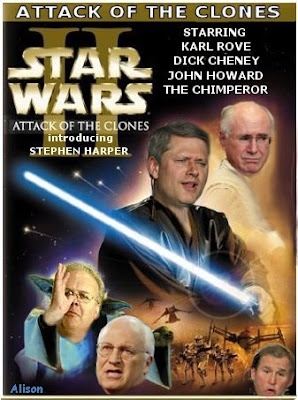 G&M : "Stephen Harper's 2003 speech urging Canada to join the U.S. assault on Iraq was plagiarized from one given by the Australian prime minister two days previously."
According to Bob Rae, about half of it.
UK Press : "Harper spokesman Kory Teneycke said the speech was five years old and they were not going to be drawn into a discussion of issues that have no relevance to Canadians. "
Yeah but I'm guessing you didn't really want his plumping for the Iraq adventure to come up the day before the election debate.
CP : "Harper speech lifted from Aussie PM makes worldwide headlines"
"ABC, CNN, MSNBC, FOXNews, the BBC, International Herald Tribune and the International Business Times..."
Gosh, world stage again.
Posted by Alison at 3:18 am
Email ThisBlogThis!Share to TwitterShare to FacebookShare to Pinterest
Labels: Iraq, John Howard, Stephen Harper

Couldn't have happened to a nicer guy.

Notice how they found a scapegoat really fast,though.

Bob : Yeah. Harper big Howard fan but never heard his speech?
I think they all just copied bits out of the memo Rove sent them so no one thought plagiarism would be an issue ;-)