"What happens," asked the Ottawa Citizen, "when a “Pierre Poutine”-style robo-caller, like the automated system that sent Guelph voters to the wrong polls in 2011, meets a robo-responder like Lenny?"

"Every minute Pierre Poilievre's telemarketer spent with our recording was time she wasn't bothering someone at dinner."
And we thank you for that, Alberta software developer Mango

The telemarketer calling here on behalf of the re-election campaign of Pierre Poilievre, champion of the Fair Elections Act, told "Lenny" she was from "Campaign Support".

Guelph-based "Campaign Support" made calls into Liberal MP Irwin Cotler's Mont-Royal riding in the fall of 2011 suggesting that Cotler may be resigning so how's about you support our Steve in a non-existent upcoming by-election?


“The calls were conducted under the business name of Campaign Support, which is a business name registered by Campaign Research for the specific purpose of conducting telemarketing activities.”

Cotler was not of course considering resigning at the time and kicked up a stink about the dirty tricks telephone campaign in the HoC.
House Speaker and $8198.79 Campaign Research client Andrew Scheer dismissed the campaign as "reprehensible" but not actionable, thereby preserving Campaign Research's other founding principal - Richard Ciano, president of the Progressive Conservative Party of Ontario - from being dragged into any committee investigation of his firm's actions.

Campaign Support was soon spun off Campaign Research as a separate legal entity headed up by Kouvalis and Greg Dunlop. Dunlop left Kouvalis's firm two months ago after four years - if LinkedIn can be believed - and now heads up his own telemarketing firm iFusion Research.
iFusion also used to be a shell company for Campaign Research 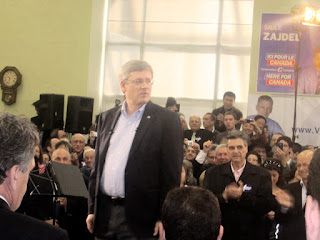 Here's Steve in 2011 campaigning in Irwin Cotler's Mont-Royal riding on behalf of Con hopeful Saulie Zajdel, presumed beneficiary of the later Campaign Research phone campaign.
Zajdel lost to Cotler and was put on the payroll in Heritage Minister James Moore's office as a shadow MP doing ethnic outreach while awaiting a new shot at the riding.

Zajdel pled guilty this year to charges of corruption and breach of trust in two real estate deals involving tens of thousands of dollars in bribes.

Conservative Party spokesey Fred DeLorey expressed surprise at Zajdel's arrest in June 2013, saying none of this had come out in their screening of Zajdel.
A few months earlier, DeLorey was also surprised when McMaher busted the Conservative Party and RackNine shell company Chase Research for being behind the Republican-style push-poll robocalls about changes to Saskatchewan's electoral riding boundaries.

And so the story has turned inevitably back to Con robo/live calls ... which is where I think we came in...
.
Posted by Alison at 2:18 am 8 comments:
Email ThisBlogThis!Share to TwitterShare to FacebookShare to Pinterest
Labels: Campaign Research, Chase Research, DeLorey, Guelph, Harper, iFusion, Irwin Cotler, Kouvalis, Poilievre, RackNine, robocalls, Scheer, Zajdel

Duffy-Cons of Canada - they're just not ready

Kev : "I'm sure Harper rejects that "rendition of the facts ' as well"

Boris : "Kev, oh, their rendition of the facts tends to be extraordinary. There's a vault in the Turks and Caicos where they lock them up. It's full of papers and reports from government scientists, scandalous emails, models of the solar system, a globe, post-cold war maps of the world, the Constitution Act 1982, a photo of PET, a CBC logo, a UN logo, a census long form, Harper's economics degree, IPCC reports, submitted questions from the newsmedia, and so on. It's guarded by 23 year old PMO interns in shorts and blue golf shirts, and knee socks. Cabinet ministers periodically fly down to beat them up and scream at them. The facts I mean, and maybe the interns, come to think of it."
.
Posted by Alison at 4:51 am 6 comments:
Email ThisBlogThis!Share to TwitterShare to FacebookShare to Pinterest
Labels: Duffy, Stephen Harper, They're just not ready
Newer Posts Older Posts Home
Subscribe to: Posts (Atom)