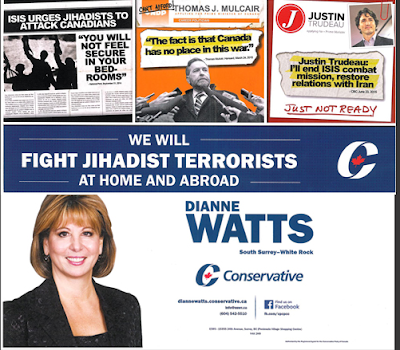 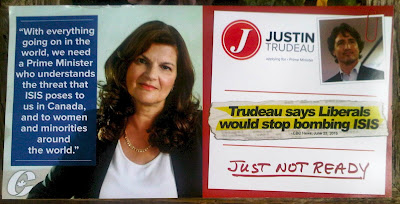 They might come from "directly from Ottawa" but there's nary a mention in them anywhere of Steve.
.
Posted by Alison at 6:44 pm 12 comments:
Email ThisBlogThis!Share to TwitterShare to FacebookShare to Pinterest
Labels: BC, Bot candidates, Election 2015, robocalls

THE RISE AND FALL AND RISE OF RMG 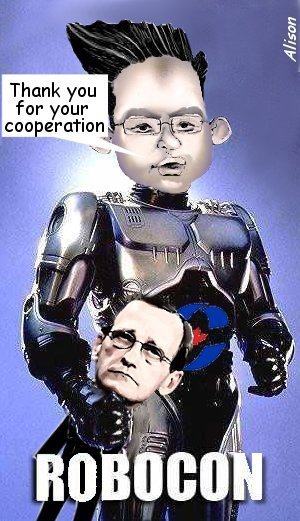 Prior to the 2011 federal election fraud/robocalls scandal, few Canadians had ever heard of CIMS, the Conservative Party of Canada’s national permanent voter-tracking database, or its close relationship to Responsive Marketing Group or RMG, the Conservatives' main GOTV phone bank and fundraising company used in that election by the CPC national campaign and 97 individual Conservative candidates.
Canadians did not know that the Conservative Party paid RMG $1.4million and provided them with a CIMS voters list and a script for its call centre employees to read to voters. That script, according to Canada Elections investigators, read in part :

“Elections Canada has changed some voting locations at the last moment. To be sure, could you tell me the address of where you’re voting.”

This last in direct contravention of Elections Canada's request that "users of the dataset of all polling sites respect the following restrictions: that the dataset be used for internal purposes only; that it not be used to inform voters of their voting location."

As it happens, the percentage of voting stations across Canada that changed location in the final week of the election was just 0.003.


In their section on RMG in the 2014 Summary Investigation Report on Robocalls, Elections Canada reported that investigators who listened to the recorded live calls noted that “RMG provided wrong poll location information in 27% of the cases involving complainants.”


“From April 29 to May 1, 2011, returning officers in 11 electoral districts reported elector complaints of incorrect poll location information coming from Conservative Party callers. When contacted by returning officers, local Conservative Party campaigns advised that the calls were from the national campaign of the party, and that the campaigns could not stop them.”


“Investigators were told by the Conservative Party national campaign chair that Elections Canada had no authority to limit a party's use of the poll location data.”

The Conservative Party’s partnership with RMG dates back to 2003 when RMG founder and president Michael Davis pitched the idea of a fundraising machine attached to a national permanent CIMS database to Stephen Harper's mentor Tom Flanagan.
Mike Harris strategist Stewart Braddick came on board to head up Target Outreach, an affilliate firm providing "fundraising and direct voter contact solutions to U.S. Right of Centre Political Organizations".
Greg Kaufman signed up with RMG in 2007. From his bio at RMG parent group iMarketing Solutions, where he became Chief Knowledge Officer in 2010 :


"Greg has extensive experience in IT management. For six years, he worked for the Ontario PC Party as part of the IT / Direct Voter Contact Team. There, he helped develop CIMS, a revolutionary political database tool that is in wide use today.

Following his time with the Ontario PC Party, Greg spent three years working for Elections Ontario as a manager in the register division, where he compiled and managed the Provincial Voters List."

Flanagan : “CIMS provided a receptacle for the hundreds of thousands of records generated by RMG’s large-scale calling programs.”

In 2009 Preston Manning at the Manning Centre for Building Democracy presented RMG founder Michael Davis with the Manning Centre Pyramid Award for Political Technology, “recognizing RMG's role in helping to build the conservative movement in Canada” :
“Since its inception, RMG has raised more than $75 million for right of centre causes in Canada, and helped to elect hundreds of 'right of centre' politicians at municipal, provincial and national levels."

In March 2010 RMG parent company iMarketing Solutions merged with Xentel, a company with an alarming history of lawsuits on both sides of the Canada/US border over its fundraising practices. That year they spent $1,839,000 on equipment to update their dialing platform and another $1,453,000 in 2011.
In the first quarter after the 2011 election, iMarketing Solutions posted $24M in revenue, but according to their Canadian Stock Exchange statement : "For the year ended December 31, 2011, the Company had a loss of $5,253,000."

A 2012 legal challenge supported by the Council of Canadians was based in part on the affidavit of Annette Desgagne, a RMG call centre worker who reported that three days before the 41st federal election she and her co-workers were given scripts to mislead voters on election day into going to the wrong location to vote.
From the Desgagne 2012 affidavit :

“The new scripts we were to read did not identify that we were calling on behalf of the Conservative Party nor did we mention the local Conservative candidate. The new script, as far as I can recall, was as follows: “Hello. My name is Annette Desgagne. I am calling from the Voter Outreach Centre. Elections Canada has made some last minute changes to the polling stations.”

Conservative Party lawyer Arthur Hamilton served motions to have the case thrown out of court before the supporting evidence had been filed.
RMG CEO Andrew Langhorne, a former election campaign worker for Stephen Harper and seven years a Director of Voter Contact and Information Management for Premier Mike Harris and the Ontario PC Party, filed an affidavit in August calling Desgagne's affidavit "categorically false".
The plaintiffs' suit to overturn election results in six ridings was unsuccessful and the court ascribed no blame to RMG.


Four months later on April 8 2013, RMG announced it was closing its call centres and laying off call centre employees, and four days after that iMarketing Solutions and all its 18 Canadian and American subsidiaries filed for bankruptcy protection in Canada and the US.
At the time they owed the Canadian federal government $1 million in unpaid taxes.

“The nature of our business often necessitates ramping work up and down based on business requirements.”

And sure enough the 42nd federal election has brought them out above ground once again, now known as IMKT Direct Solutions in Canada and iMarketing Acquisitions in New Mexico. They are currently posting ads to hire call centre workers across Canada and Andrew Langhorne is once again launching those phone banks for Voter Outreach Centre, the name registered in February 2011 and used by RMG in the previous election as well.

Households across Canada from Ottawa to BC reported receiving their calls beginning in December.
Port Alberni municipal councillor Chris Alemany got a call on August 4 :


“Hi, this is the Voter Outreach Centre for Prime Minister Stephen Harper. We would like to know if we can count on your support for Stephen Harper in the upcoming election”

His wife picked up another call 11 days later :


"Hi, this is _name of person_ with the Voter Outreach Centre. We would like to know if we can count on your vote for Stephen Harper in the upcoming election."

Councillor Alemany : "Note the difference from my call? They didn’t specifically identify the Voter Outreach Centre as being a part of the Stephen Harper campaign."

A new script or a bit of free lancing on the part of the call centre employee?
Either way, they did mention Steve in there so it's all still legal.

Operators are standing by...

Stop Harper - pass it on.