VoxPopLabs, the same folks who brought you Vote Compass, has taken something of a beating in public opinion for their electoral reform quiz mydemocracy.ca.

Originally introduced by Justin Trudeau as "a fun little questionnaire that gets into values rather than models", Andrew Coyne referred to it as "a dippy pop quiz or botched push-poll", soundly mocked for the obvious slant of the questions with "two thirds of the “values” questions and over half of those probing respondents’ “preferences” having nothing to do with electoral reform".


Asked about this on CBC, Mark Holland was at pains to point out that the government didn't pick the questions.
No, but you did choose the parameter of the questions; VoxPops merely did the job you asked them to do.

From the government tender awarding the contract to VoxPopLabs in September :


"The key tasks include:


Provide a draft of questions for review by the Project Authority;"

The Project Authority here is presumably the Privy Council Office, described in the bid as the "End user entity".


"Conduct a robust scientific survey in advance of the launch of the interactive online application in order to identify key themes and develop classifications based on responses;

.... determine segments and develop narratives for each cluster based on the profiles that emerge from the survey;

VoxPopLabs says they developed a large survey, field-tested it, and then asked a panel of 3,000 Canadians "the remaining questions and used their responses to generate a cluster analysis".
This is where those five much-mocked archetype categories come from.


Develop a robust model ...  to instantaneously classify participants to the interactive online digital consultation platform into segments uncovered in the survey

Ok, so your answers slot you into one of the five predetermined archetype categories.

My complaint with the above approach is that the archetypes were built on different questions asked than those asked in the final survey, and that of the five, there is no category for people who are both in favour of some version of proportional representation but against online voting. And did we really need five direct questions about online voting and mandatory voting but none on proportional representation?

Provide categories of customized user feedback and data visualization for review by the Project Authority;

This is, I grant you, more scientific than the five categories of Heathers and Zoes and Dougies and Steves and Eunices that conservative strategist Patrick Muttart categorized Canadians into for Stephen Harper back in 2005, but I don't see it getting us any closer to electoral reform.

Not completing the survey will result in a repeat of the ERRE Liberal MPs' contention that no one is interested. However if you do the survey, game the questions by figuring out which ones give a glimmer of support to the idea of proportional representation and mark them "strongly agree", you possibly run the risk of being disqualified because, as the ERRE Liberals also complained, everyone who showed up to townhalls or answered the much superior ERRE survey was self-selective and already had an opinion.

Filling in this survey is quite a bit like strategic voting, a reason many of us want rid of FPtP in the first place. FairVote has provided a guide to answering it.
.
Fun fact : VoxPopLabs mydemocracy survey cost $326K.
The entire budget for the now disbanded ERRE committee, their five months of witness testimony, their travels across Canada, and their online survey on electoral reform systems, was $300K.
.
Posted by Alison at 7:58 pm 4 comments:
Email ThisBlogThis!Share to TwitterShare to FacebookShare to Pinterest
Labels: electoral reform, ERRE, mydemocracy.ca, VoxPopLabs 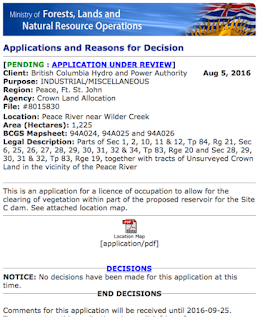 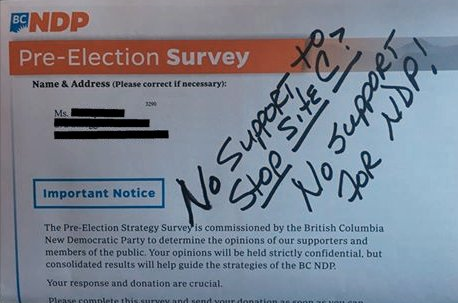 The BC NDP survey : 15 questions, one of them a multiple choice of 17 issues to prioritize.
.
Posted by Alison at 1:29 am 7 comments:
Email ThisBlogThis!Share to TwitterShare to FacebookShare to Pinterest
Labels: BC Hydro, BC Libs, BC NDP, Site C Dam

To the BC KM17, Your Next Career

... from Kim , who used to blog at sistersagesmusings ....
BC 17, Your Next Career
Dear BC(LIB) MPs;
Your photogenic leader has just tanked your career as a politician in BC. I hope you feel ashamed and embarrassed. If that is the case, I would suggest that you strongly consider crossing the floor or resigning your post, because, clearly, you have no mandate in your constituencies. You all know how we feel about our coast. You all know how important this ocean is to our economy. You all swept into office on promises of a new Nation to Nation relationship, how you basked in the glow of "Governments give approval, but only communities give permission". How you embraced UNDRIP and the Paris Accord. Unless you part ways with your Party leadership on this, you are liars and cheats and not fit for representing your constituents in Ottawa. You all know that there is no world class oil spill response, ask the Heiltsuk Nation in Bella Bella. How the Oil cleanup company is owned by the Oil Titans. How the coast guard comms system has failed many times since Harper closed the network. I would suggest that you people start reflecting deeply on these issues, and the fact that you have just allowed massive protests to endanger our people.
I just sent this to the 17 Liberal MPs in BC.
Jody.Wilson-Raybould@parl.gc.ca
Harjit.Sajjan@parl.gc.ca
John.Aldag@parl.gc.ca
Terry.Beech@parl.gc.ca
Sukh.Dhaliwal@parl.gc.ca
hedy.fry@parl.gc.ca
Stephen.Fuhr@parl.gc.ca
Pam.Goldsmith-Jones@parl.gc.ca
Ken.Hardie@parl.gc.ca
Ron.McKinnon@parl.gc.ca
joyce.murray@parl.gc.ca
Joe.Peschisolido@parl.gc.ca
Carla.Qualtrough@parl.gc.ca
Dan.Ruimy@parl.gc.ca
Randeep.Sarai@parl.gc.ca
Jati.Sidhu@parl.gc.ca
Jonathan.Wilkinson@parl.gc.ca
.
Posted by Alison at 6:09 pm 6 comments:
Email ThisBlogThis!Share to TwitterShare to FacebookShare to Pinterest
Labels: BC Libs, Kinder Morgan, Trans Mountain pipeline
Newer Posts Older Posts Home
Subscribe to: Posts (Atom)